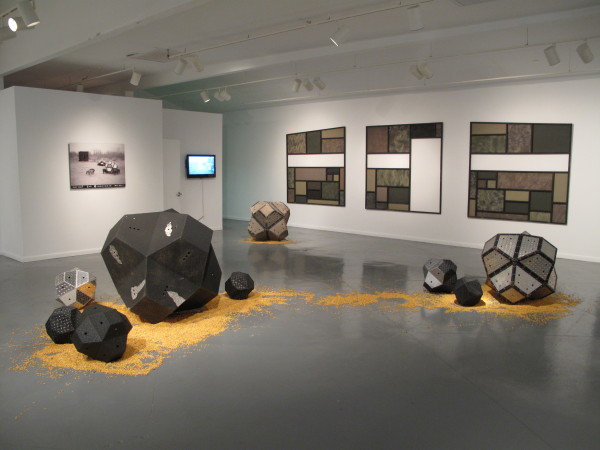 Animals are royalty. We’re excited to meet them, and we tot up sightings of bird species as if they were Hollywood celebrities. Buster Graybill‘s elaborate sculptural feeders and patient video surveillance speak eloquently about the intensity of our interest. His show Feral, on view at Art League Houston, takes the fascinating activity of animal watching and contextualizes it as artwork, but fails to make it more fascinating.

The stars of Graybill’s work are the animals themselves, not Graybill’s interventions. Through bribery with feed corn, he has induced feral hogs, deer, and bighorn sheep to take an interest in his constructivist sculptures, occasionally even nudging and nosing them as if they were ponderous smartphones made for creatures lacking fine manipulative skills. Predictably, this makes the animal surveillance videos the best part of the show.

Graybill’s technique parallels that of Texas hunters. Lured to feeders placed in the landscape, game animals that might in another situation be in someone’s rifle sights are shot with a camera from camouflaged blinds. For the exhibition, Graybill’s metal feeders are brought indoors and arranged showroom-style in the Art League’s main gallery, amid an artful scattering of feed corn. The walls are lined with dozens of big photographs of animals interacting with his creations, and a pair of surveillance videos. Welded steel panels, like camouflaged Mondrians provide filler for the back wall.

The feeders are alien: faceted metal toys with simple space-age geometry. Welded neatly and competently, without polish, they successfully capture the utilitarian aesthetic of watering troughs and feedlots, other situations where large animals are controlled and exploited using similarly sturdy appliances. They make the show like a runner-up 4-H fair project: methodology, apparatus and results displayed for judging, but without much in the way of hypothesis or conclusions. 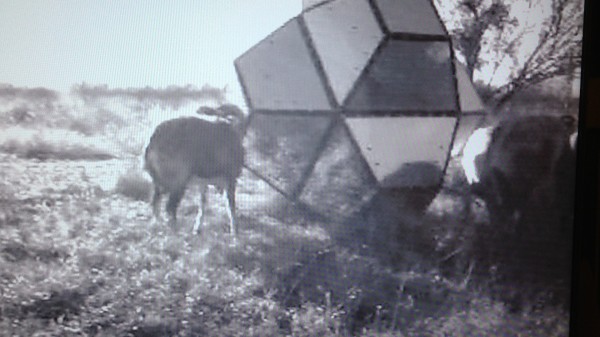 The two videos playing in the gallery show the most interesting bits of what must have been a long, automated surveillance. It’s predictable stuff: animals appear, grunt, nibble, and crowd. The animals, like us, couldn’t care less about Graybill’s constructions. One entrepreneurial bighorn butts a sculpture out of the way to better reach the corn it’s spilling, but otherwise nothing much happens. Oddly, you keep watching anyway.

The night-vision scenes bring to mind Bruce Nauman’s Mapping the Studio I (Fat Chance John Cage) from 2001, surveillance videos of varmints in his nighttime studio. Viewers wait and watch for the very occasional appearance of dark, fast-moving shapes. Was that a rat, or a mouse? The payoff is absurdly small; the waiting and watching are everything. Nauman tickles an atavistic caveman quirk that makes us willing to wait forever for prey; Graybill’s videos cut to the chase, and miss the point. The oddness is not that the animals are attracted to his feeders, but that we’re stalking them.

In his 2006 show, Gun Play, at Poissant Gallery, Houston artist Seth Mittag presented Texas’ rural, masculine, blue-collar hunting culture with tolerant, if heavy-handed, irony through coloring book pictures of gutted animals and kids sighting rifles. Like Mittag, Graybill seems to be working on his own art culture/ranch culture reconciliation. Graybill’s work reiterates a familiar Texas contrast I’ll call the “Marfa paradox,” giving urban gallery goers a smell (not literally!) of ranch life, where animals and their control are an everyday concern, contrasting it with the citified artworld, but he doesn’t take it much beyond a sophisticated chuckle.

The work in Feral was mostly conceived and executed in 2010-11. Graybill’s new work on the same topic may cut closer to the bone: his upcoming project, Renegade Modernist Utility Trailer (R. MUTT) is a mock-survivalist trailer, complete with off-the-grid solar power, armored aluminum sides and a half-dozen fishing rods, in which Graybill will camp at the Texas Contemporary Art Fair in October. 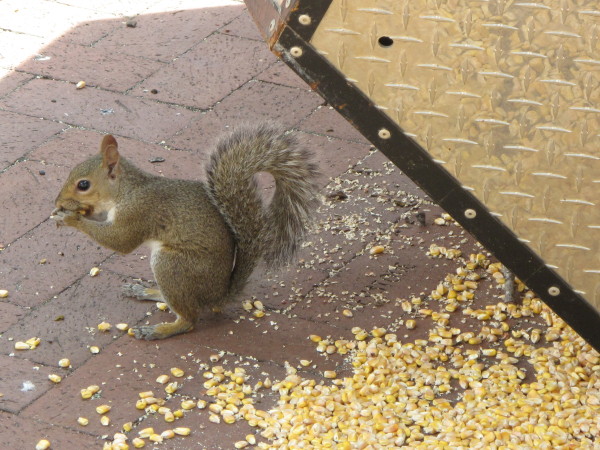