Despite the sculpture, the video, the radio controlled car, the diorama, and the coloring book, Seth Mittag’s Gun Play at Poissant Gallery is a drawing show with trimmings. That’s good: the best thing about the show is Mittag’s dab hand with a mouse. It’s rare to see computer drawings this fluid and precise, capturing nuances with miraculous wit. 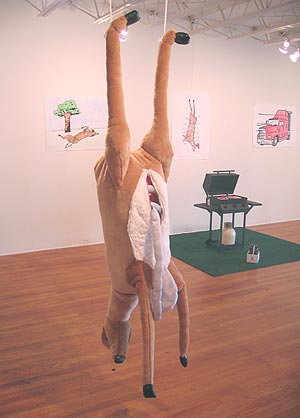 The drawings are cropped like snapshot photographs, scenes from the homey, everyday world of animal slaughter. Time and again, with only a couple of deft strokes, Mittag gets just the right little shape to suggest the eager but awkward squint of a toddler sighting a rifle or the complex curve of a truck wheel well. The drawing is still clunky, encumbered with all the tell-tale gaucheries of computer paint programs, yet Mittag uses the computer’s harsh, flat style with the mechanical forthrightness one might admire in a big rig, and it’s perfectly suited to portray the stumbling, rough-edged love of beer, guns, trucks, and barbeque. 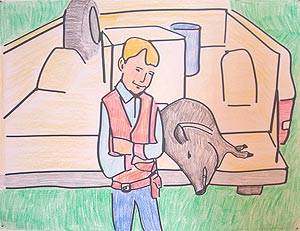 The drawings are presented two ways: as poster-sized digital prints and collected in a coloring book. It’s as if pages from the book have been blown up, hand-colored with crayons, and pinned to the walls. Mittag colors in a businesslike but not over-fussy way.

Whenever you show guns in art, you’ve got to take a stand. Mittag portrays a rural, masculine, blue-collar hunting culture with tolerant irony. He’s against it, but he’s sympathetic. There’s the initial blood-and-guts shock of seeing pictures of dead, gutted animals, but it’s just a reflex, quickly replaced by envy. wouldn’t it be great fun to rove the countryside in a big truck, hunting down tricky, beautiful animals, then washing them down with cold longnecks at the backyard grill? If only it weren”t for the load of citified guilt you’d have to deal with afterwards.

First Beer works the same way. A shirtless man holds an infant on his knee, offering it a can of beer for a taste, like a hillbilly Madonna. It’s shocking first, then funny, then touching. The guy wants to share his pleasures with his son. The reflexive oh, no! reaction is quickly replaced with humor and sympathy. Who’s he hurting, anyway? 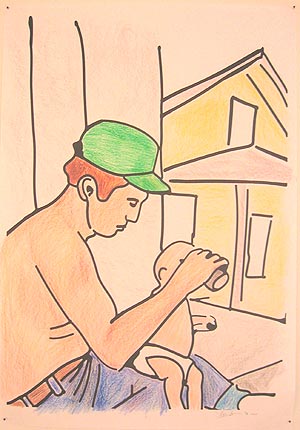 The show is all about teaching boys to hunt and shoot, drive big trucks, cook outdoors, and drink in divey bars; in short to become socialized into a culture with ethically problematic elements. In the best drawings Mittag presents the good with the bad, creating thought-provoking dilemmas. In Javalina , a shy boy poses with proprietary pride next to a dead pig which slumps like a sack of feed corn over the tailgate of a pickup. In Learn”n to Shoot a toddler and a balding man share a monent of quality time as they sight a rifle together.

Two life-sized stuffed animals, or rather plush toy versions of dead animal carcasses, are clever and well made, but less thought provoking. The javelina has convincingly variegated fake fur, leatherette hoofs and a satiny polyester pool of blood pouring from its stomach. The hanging deer carcass unzips to spill out pearly satin intestines. But contrasting plush toys and gutted animals is like clubbing a baby seal. It misses the nuanced irony of the drawings.

A child-sized barbeque grill and hunting blind show the innocent side of hunting culture. They are playground equipment, training kids for a life outdoors. Hide in a camo-covered treehouse, shoot at the jumping deer on the video; it seems wholesome compared with contemporary videogames. 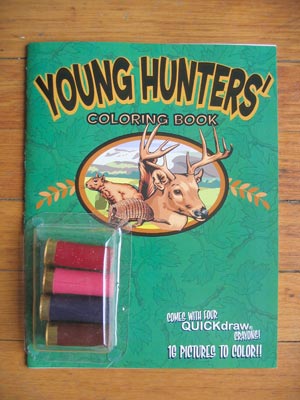 The floor of the rear room is occupied by Hunt’n , a miniature dirt track with a radio-controlled hunting truck and plastic game animals. The dirt track tableau has a forlorn, make-believe quality; using piles of bare sand as hills and dead twigs for trees. The plastic animals are all different scales, making the rabbit nearly as big as the hog. It’s set up a child might make in a sandbox, it might have been fun to play with (no batteries), but not much to look at.

There’s a mouse-sized doorway in the gallery wall nearby. By crouching down you can see the inside of a cute dollhouse-scale bar, a windowless hideout with dark plywood paneling, posters of busty girls with beers and a miniature pool table. Playing at hunting and playing at drinking are two sides of the same cultural coin. 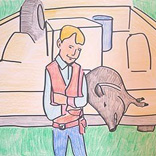