The Art League Houston has announced it’s honorees for its 2015 artist, patron and lifetime achievement awards. 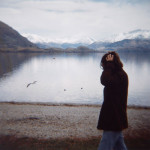 Amy Blakemore is ALH’s artist of the year. Blakemore’s subtly curious snapshots, taken with a variety of funky film cameras and processed and printed by hand, cast a surreal but deeply humanistic eye on seemingly mundane situations and people. Blakemore has exhibited her photographs throughout Texas and internationally for the last thirty years, including participating in the 2006 Whitney Biennial. she is currently head of the photography department at The Museum of Fine Arts’ Glassell School.

Forrest Prince was selected for ALH’s Lifetime Achievement in the Arts award. For more than forty years, his intense, didactic constructions have projected his idiosyncratic message of clean living and universal love.

Ooooooo, I love these images. I also wanted to see if Amy and I are related. There are lots of artists in the Blakemore ancestors.