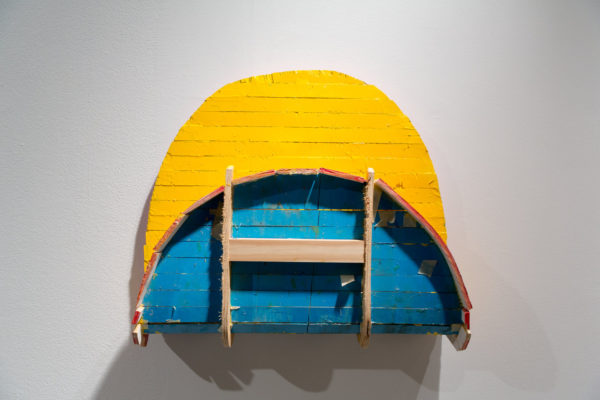 Thingness, the title of Dallas artist Benjamin Terry’s solo show at Art League Houston, refers to objective reality. A thing is a thing if it exists in the physical world. Terry’s objects, mostly wall-mounted and mostly brightly painted wood constructions that evoke and trade on the history of Modernist assemblage from Duchamp to Mario Merz, are definitely things. They certainly exist and they proudly display the gluey, taped, sawed, cut, stapled evidence of their physical existence. But what are we supposed to do with these things? How do we use them?

“Thingness” also has to do with the idea that useful objects become things when they become useless. Ideas can turn useless things into useful things. Useful things are tools, but tools can turn back into things when better ideas for better tools come along. A broken cell phone reveals its stupid “thingness” when you drop it on the sidewalk for the last time. But its thingness was annoyingly hinted at before it died, when it still sort of worked but scratched and stabbed the finger and the ear. But the useless thingness of a broken cell phone and the uselessness of Terry’s work are different things. 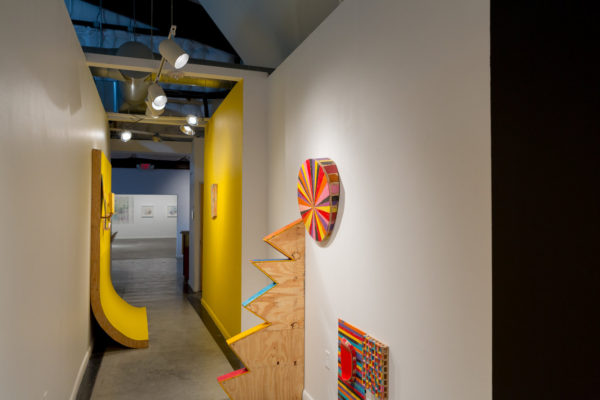 Oscar Wilde’s conclusion at the end of his famous preface to The Picture of Dorian Gray is that “All art is quite useless.” All of Terry’s objects are made from the same comically monotonous list of materials: “Various Painting Media, Glue, and Wood” — all useful things to be sure. The kind of wood Terry uses is standard compressed plywood. It’s less wood than wood product, and it’s used to build useful things like fire-hazard apartment complexes and shitty furniture.

Terry’s “painting media” is latex, enamel, spray paint and acrylic. I’d be surprised if there was much art paint used on these things. Terry uses masking tape in some of them too. One Untitled thing sits on a pair of pointless wheels. A couple of Terry’s smaller things are mounted on a bright yellow plywood construction that looks like half a skate ramp — nothing more useless than half a skate ramp. A lot of artists use building materials to make art but Terry does a nice job of driving home the fact that he’s turning useful things into message-free useless things. In this dismal cultural moment, when the party line seems more and more to demand that art be politically utilitarian or get out of the way, Terry’s frivolity seems rebellious. I appreciate that.

Saying art is useless and should be useless is a pretty bold statement in a world that’s more full than ever of useless things like headphones with one perpetually burned-out earbud, and short on actually useful things like an efficient system of health insurance. But Wilde’s language, like Terry’s art, is elusive. For Wilde the highest ambition of art is to create “mood.” Wildean mood is more or less secular magic. Artists cast spells: some evil, some benign. If you’re the kind of person attracted to a darker, pessimistic view of life, certain artworks will invite you in and others will repel you. If you look for the sun and the light, some works will reflect what you seek right back out at you. It’s about dark magic and light. Binaries exist. But the artist’s job is to steer clear of the ideologues and find the sweet spot in the middle where life is most interesting and a lot more confusing.

If we’re going to go with this mood/magic thing we could ask what sort of magician Terry is. What kind of spell does he cast with his useless things? More than anything else, they’re funny. They’re light, there’s a good bit of joy in them. But they’re nearly as cynical. Terry’s paint palette is simple and garish but roughly applied, chipped like old circus equipment. From a distance they’re silly, but up close, they’re witty. After giving Inverted Sunset the second or third once-over, I noticed a sparkly little sticker stuck in one of the corners; I actually laughed. It was like Terry gave himself a gold star for smashing a beach sunset, a taco, and a kid’s bunkbed ladder into one dense doo-dad. Is TFW you’re squinting at Arte Povera through South Park a mood? Is this what the kids mean by #mood? 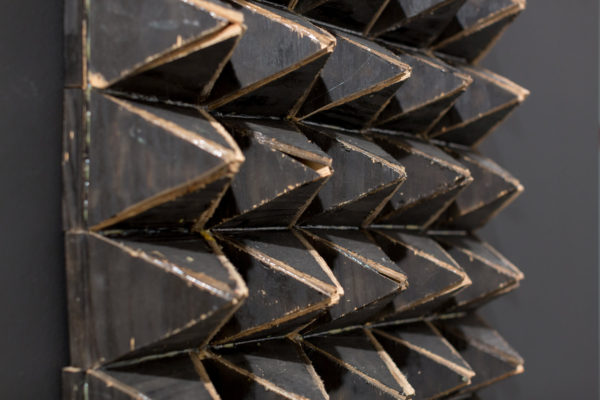 If you fight the ADHD and spend a little time, crane your neck, look at the edges, stand on your tiptoes, peer over the top and crouch down to peek underneath, the shoddy, haphazardness of Terry’s stuff  gives way to careful, detailed construction that refuses to take itself too seriously. The geometry of the pyramids in the faux-foam packing grid of Dracula’s Pillow hold together in a clean grid, but none of them come to a sharp, finished point. Call it lazy geometry. There are gaps and cracks, and visible glue all over the place in Thingness. We live in a pretty anxious time and like all of us, Terry’s things seem to be holding themselves together as best they can. 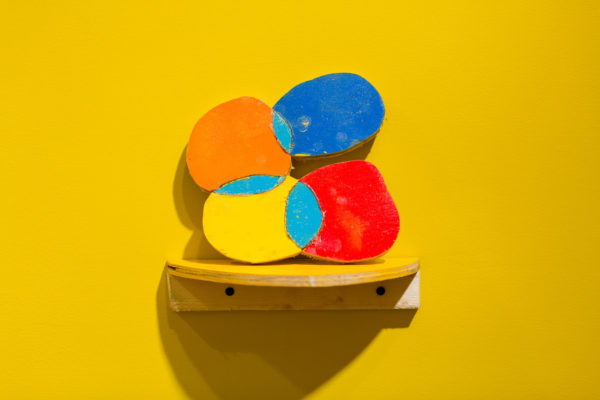 In the Untitled wheeled billboard-thing, irregular, illogical colorwheels — which at first seem to be glued to the surface — finally show themselves to have been cut out of that surface and pushed slightly forward, glued back into their own negative space. Terry makes these slight formal gestures pay off in a big way by lowering our expectations overall, opening us up to even the smallest surprise. All of Terry’s things give the illusion of tottering between over-construction and collapse. The magic is comic. I don’t laugh much but if art needs anything these days, it could use a few well-timed, visually precise jokes.

At the end of the day Terry’s too light for me. There’s too much hope. His things are too charming and too funny. The cynicism is there and the humor has bite, but I can’t help it; I go for the darker magic — Faulkner over Pynchon every time. Where’re the car wrecks, electric chairs, gushing blood and broken bones? If I don’t see enough of my own crooked misanthropy in Terry’s things, Oscar might say it’s my problem. In the same preface in which he declares art to be quite useless Wilde also writes that art is a reflection of the viewer, not the artist. Turns out these art things are mirrors, not portraits. Maybe the fact that I can’t feel completely at home in Terry’s world has more to do with my damaged soul than his lightness of being. I’ll think about it. In the meantime, I really do appreciate the jokes.

Through July 22 at Art League Houston. All photos by Alex Barber.