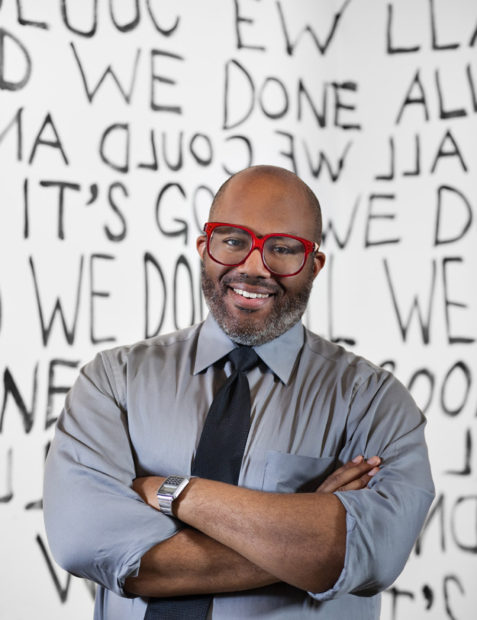 This fall, the Art League Houston (ALH) was planning an ambitious retrospective of their 2017 Texas Artist of the Year, Trenton Doyle Hancock. The show was originally set to open on September 8th at ALH, but after Hurricane Harvey, it was initially postponed due to roof damage above the building’s gallery space. However, Jennie Ash, ALH’s Visual Arts Director, reports that once their insurance claims adjuster saw the true extent of damage, they informed the staff that no exhibition could be held in the building for at least two months.

And so two weeks ago, Ash began urgently contacting people in the Houston art community to find an alternative space to host the show. In stepped Alison Weaver, Executive Director of the Moody Center for the Arts, who, as Ash puts it, “spearheaded the charge to get approval from Rice’s administration, which she did successfully a week later.”

Rice will be hosting the ALH exhibition Trenton Doyle Hancock: TEXAS: 1997-2017, in the former Rice Art Gallery space in Sewell Hall on the Rice campus. That space has been sitting empty since this summer, as the university plans to transform it into a welcome center. If all goes according to plan, the Art League’s Hancock show will run at Rice from September 29th to November 17th (exact dates for the exhibition are pending).

This happy result turns what might have been a disaster into a win for all parties involved. Ash said of the move, “When I informed Trenton about the status of our galleries, and that the former Rice Gallery would be available for his show, he was really excited! He said he has always wanted to exhibit at Rice and he loves the symbolic gesture of two local institutions working together in a time of crisis to support an artist’s vision. Personally, I think its a testament to Trenton’s amazing character and the brilliance of his work, that the community without question stepped up to help him, and Art League. It is times like these that bring out the best in people, and we are so grateful.”

Hancock is also pleased, saying “I’m so happy that Rice Gallery stepped forward to take the exhibition. It’s a great example of institutional cooperation and the benevolent Houstonian spirit.” And the Moody Center’s Weaver echoes those sentiments: “I think the city-wide collaboration between institutions in the wake of Hurricane Harvey is truly the silver lining of this disaster. I’m so pleased that Rice is stepping up and helping artistic institutions across Houston. We hosted Da Camera’s auditions for their young artist program here at the Moody, and performances by The Houston Symphony and Inprint have relocated to the Shepherd School of Music from the theater district. The storm has been an opportunity for that Texas spirit to shine, and we are delighted to be able to host the Art League’s Texas Artist of the Year exhibition.”

For Weaver, there is an additional benefit to hosting the Art League: “Trenton’s show will be on view at the same time as the Moody’s exhibition of Mickalene Thomas. Both artists are such insightful commentators on our time, and we hope visitors to Rice will have the opportunity to visit both exhibitions while they’re on campus. It’s possible that there will be a dialogue between exhibitions that might not otherwise have been obvious without this proximity.”

Well done Jennie Ash, Art League, Trenton Doyle Hancock and especially Rice University for finding a way to make this event take place. The city of Houston thanks you all.

This is great, and I am so glad it worked out for Trenton and everyone at the Art League. Jennie Ash, you are amazing, and thank you so much Rice Gallery staff!

I love how I misspelled my own last name.

Excited for my elementary thru high school classmate. I remember him always drawing in elementary school. Glad that he has become a success with his creative artwork!