The Slicker Side of Punk: Benjamin Terry at Galleri Urbane, Dallas 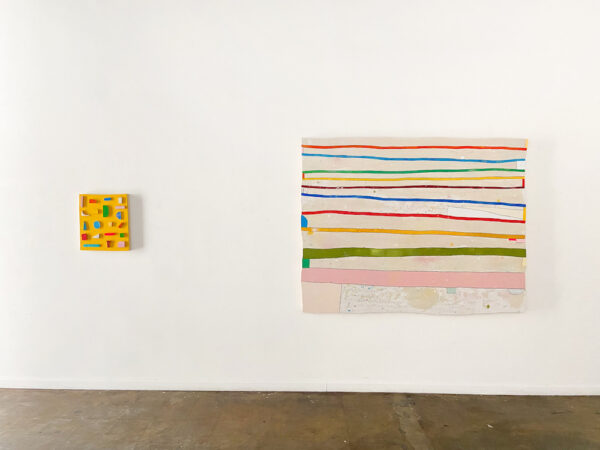 Ben Terry’s painted wooden wall objects hide their intelligence behind a feigned crudeness. They look great in photos with their Lisa Frank pinks and teals, mac-n-cheese yellows, and Astro-turf greens, playing on an ’80s cartoon confetti vibe but freshened up for a 2021 palette. Their real smarts, however, are harder to photograph and harder still to describe. Instead, they’re accessed by time spent peeking and poking around the unpredictable arrangement of formal elements. The work, on view at Gallery Urbane in Dallas, pivots on carefully planned silliness and deceptively poor craft, and this balance of thoughtful and careless gives them an edge. Like punk rock, but slicker and savvier. 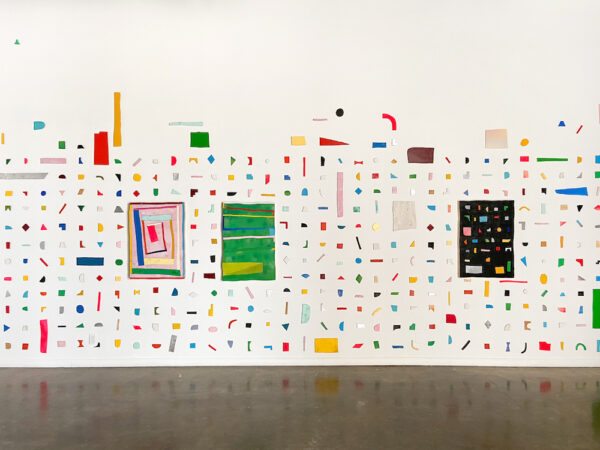 The dozen or so individual works in Terry’s solo show, titled Bits and Bobs, are extended by an installation covering the longest stretch of wall with hundreds of vaguely geometric plywood cuttings the size of fidget-spinners or Happy Meal toys. “Bits” and “Bobs” are categories of things in the same way “Whatsits” and “Doohickies” are — cutesy words for the unnamed or unknown. Their most salient characteristic is their noodleyness: the jiggly jig-saw cuts that shape each and every element (including the 1”x2” lumber backings) make hard-edge geometry feel impressionistic, akin to the unsteady hand of late Matisse. But really, for me, this work boils down to line and surface. In a roundabout way these are drawings: animated by specific speeds and attitudes of line. 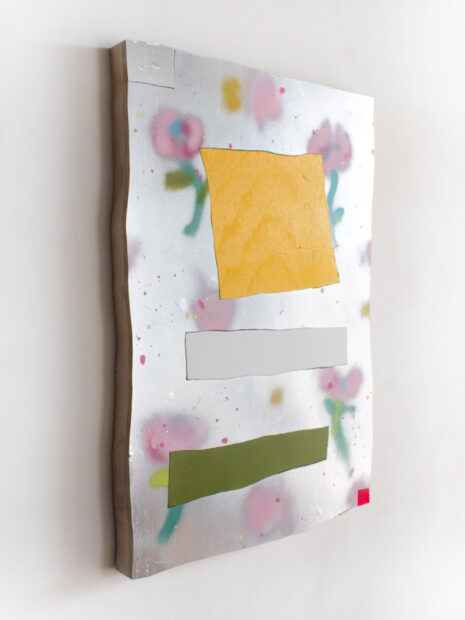 In the past, Terry’s work has been, in turns, both flatter and more dimensional. This work reins in previous off-the-wall antics to tightly package mischief into painting-like dimensions that still seem to defy traditional object categories. The two large works in the show typify Terry’s two main compositional strategies here: “bobs” floating within the picture plane, and “bobs” cutting through or snaking along the perimeter. Both relate to children’s toys. 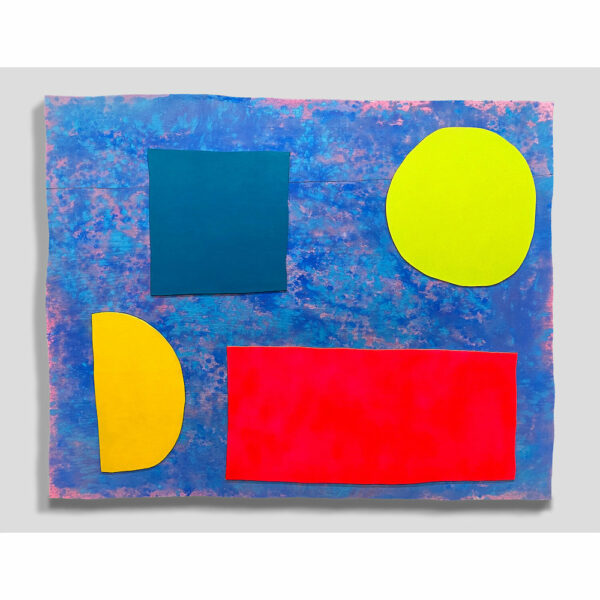 Jazzed is a version of the former with a field of crackly matte blue spattered over violet underpainting and punctured by four large shapes in primary colors. Simplistic at first glance, but then the texture begins to sizzle, and the shapes balance in a particular, jittery way. The closer you step, the more unpredictable decisions unfold, until before you know it things aren’t so simple anymore. 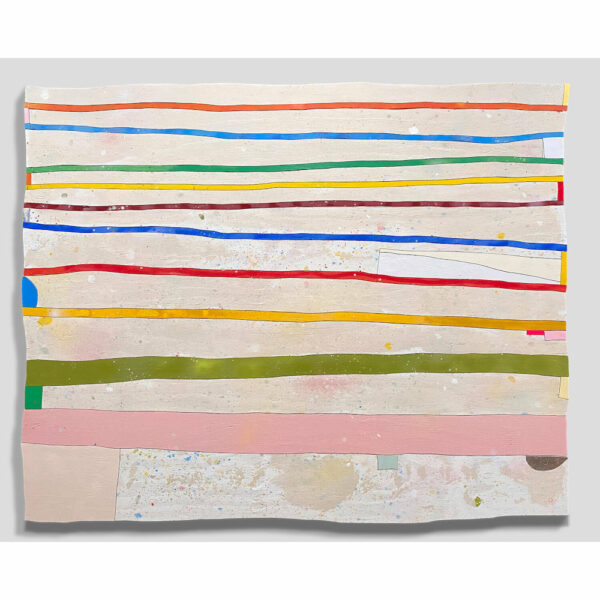 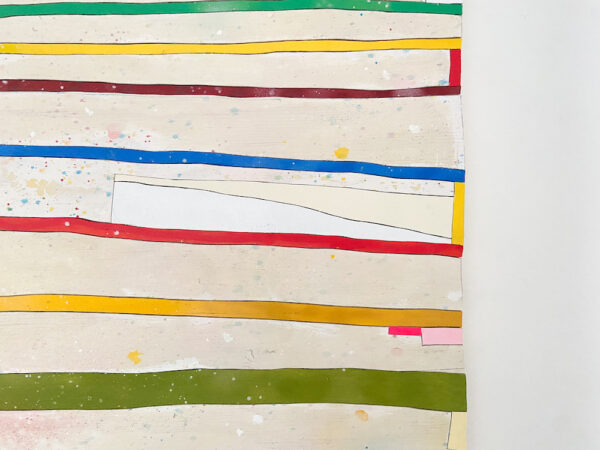 In other works, bobs and bits cling to the utmost edges of the wood constructions, like fragments of frame. I’ve always loved when Mondrian would make this move, dropping a black line or a red square dead on the edge of the canvas. For Terry’s purposes, it keeps pointing our attention to the area where surface turns into substrate — Painting’s forth wall. In PJ, a meandering line is made by a rainbow train of skinny rectangles laddering up the outer edges and slicing back and forth through a field of chalky off-white. These plywood strips are inset flush into the surface with just enough wiggle room to create natural outlines from the gap that read like modulated lines in an ink drawing. Terry has a feel for this sort of thing. 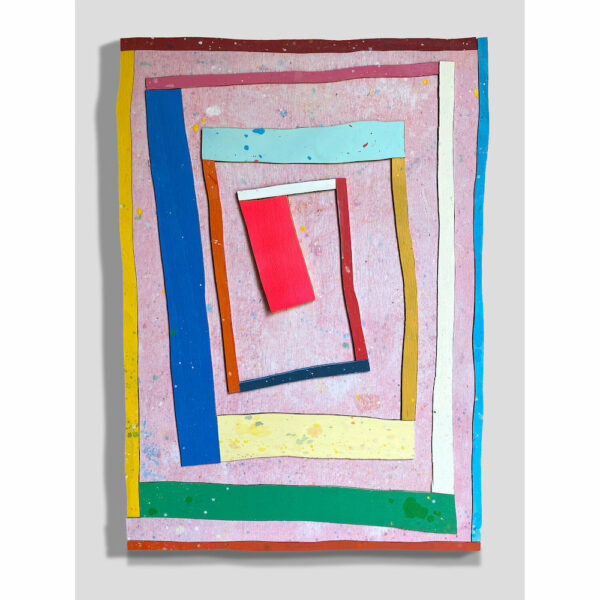 In Marbles II, these same elongated rectangles are abutted into a labyrinthine spiral. The shapes feel haphazardly thrown together until you notice that they are individually inlaid into the surface with a fair amount of forethought and precision. Spontaneity married with patience. 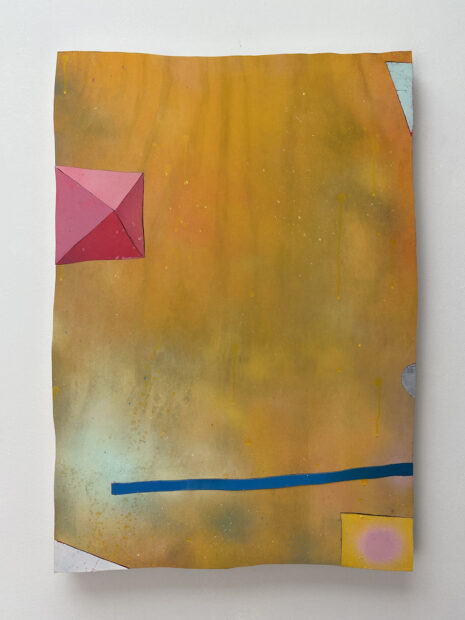 A few of the pieces give off a strong sense of figure/ground, though the picture feels like it was built backwards. Treasure Map and Trapper Keeper, two medium-sized works that share a wall, appear to levitate shapes over atmospheric haze. Terry sneaks deceptive hijinks into the logic of the space. The play of various sheens and opacities against each other create perceptions contradictory to physical “facts on the ground.” In places, the woodgrain pattern reaches through and gives the surface a reverse trompe l’oeil effect, creating a sense of illusion where there is none. Things both aren’t and are what they seem. 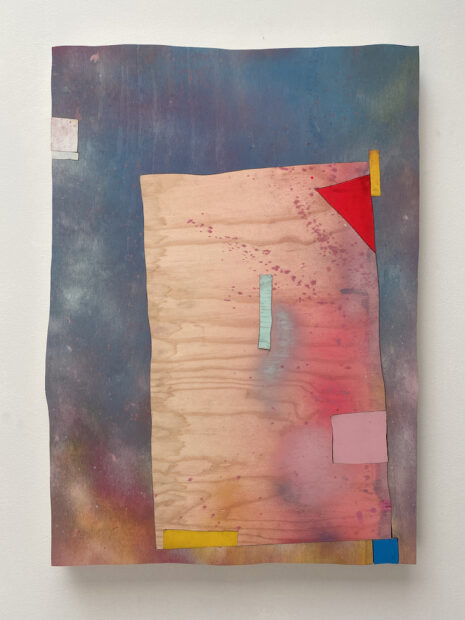 My favorite aspect of the work, despite a nagging air of frivolity, is that there’s actually a rigorous devotion to the perception games played with very basic materials. And though the comparison may not seem apt on the surface, it reminds me of looking at the naked pencil lines and unfussy paint washes in Agnes Martin’s canvases that, when you stand in the right spot, fuse vision into a profound perception of space. I don’t believe that Terry is as sincere as Martin, or as reductive. But his work foots around for the same kind of material grounding. And who said formalism needs to always be so formal?

Through June 26 at Galleri Urbane, Dallas.