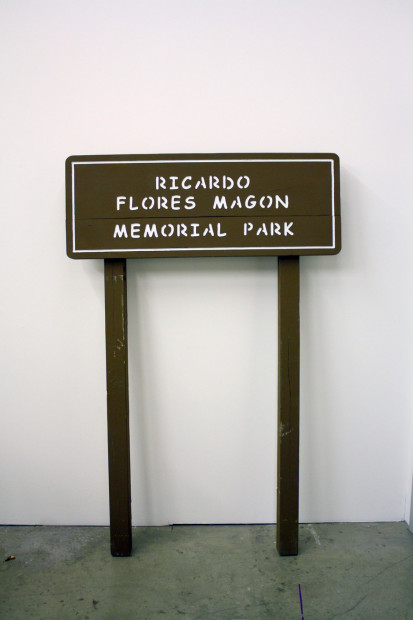 The Exploring Latino Identities series examines issues in Latino/Latin American contemporary art through interviews with artists, art historians, and others. In today’s installment, Houston artist Gabriel Martinez talks about trespassing, staking a claim for art, and making a scene.

Lauren Moya Ford: How do access and restriction operate within your work?

Gabriel Martinez: A lot of my work boils down to movement or passing, and therefore trespassing. In a lot of the sign work there is a sort of movement against restriction. In many ways, our movement is restricted on the global scale, but also in the civic metropolis. One way to get around that, in order to trespass, is to pass. The Welcome to Ricardo Flores Magón Memorial Park (2012) piece mirrors the look of federal park signs. It adopts the visibility and physical appearance of the park sign and then calls it in to question. This happens a lot in the work: sneaking into a space.

LMF: How does your perspective incorporate history?

GM: History is a sham. When you’re in a park, you’re not thinking about where the land came from. With this piece in particular (Welcome to Ricardo Flores Magón Memorial Park, 2012), the nomenclature is so important: it’s where ideology and power rear their head in a public park system. Even in the building we are in, the naming rights to a hall, classroom, or parking lot is based on money. The Flores Magón park would be a park I’d like to see. It is history, but it’s a future hope. It’s also my joke; for me they often start as humor. For the Flores Magón brothers to have a park sign is a reformative process. 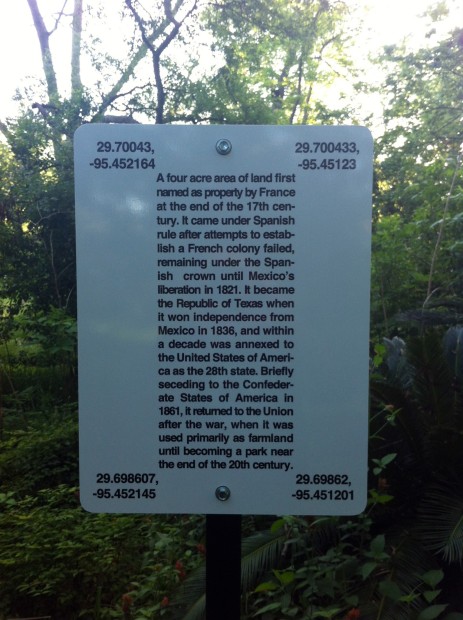 LMF: That reminds me of the sign you did last year at a park in Houston.

GM: I forgot the name of that park, which I’m glad, because it was just named after someone who donated the most money, which is OK for some people, but not for me. I never wanted to use the official park name. The latitude and longitude of the four corners of the park are on the sign and act as a name in a way. It was named as property by the French, and that’s where that history’s from. Before that it was perhaps occupied, but not owned; it was just land. The naming of the park is a very important element, and something I think we should push back on.

LMF: How does naming impact Latinos?

GM: Nomenclature is always a failure. As soon as a community begins to be corporealized, that also means it’s coming apart, it’s already failing. Latinos have a unique position to up-end some of that madness because none of those categories are valid. Latino means from Latin. It is language-based and that would mean that French and Romanians are technically also Latinos. With every name you can pick it apart and see how it fails. In those failures, you can hopefully move to another better term. But it’s only a matter of time until that term fails also. My dad was a Chicano: he was of that generation. I prefer that term because it’s taken up with a political component. It’s not inherited, it’s one that is chosen. I’m from Alamogordo, New Mexico. Everyone says they’re Mexican there. And that’s fine until you drive 90 miles to the border and that starts to unravel when you have to distinguish between race and nationality. Then when you’re in Mexico City, you’re from America. I love that; I think that confusing mess is something I’m attracted to. Also because Latinos are white, black, Asian, everything—there’s a chance that it can break apart in a productive way. The term means so much it points to the ridiculous notion that’s contained there. Nomenclature is problematic and should be directly confronted.

LMF: Where do Latinos fit into today’s art world?

GM: Fortunately there are art worlds, and that’s something that I never forget. My work is not part of the ‘Art World’ with a capital ‘A’ and a capital ‘W’; it’s a pocket of that universe. Another source of pride for me was the Mexico City artists: it’s the best art city on the planet. I don’t want to say that there should be a Latino art world, or a Latino collector base; that gets into dangerous territory. But with artwork the operation that occurs over and over again, hopefully, is that the artist is staking a claim that their work should be respected, given the right reception, and a dignified place amongst other works of art. That can mean you’re staking a claim for something that’s clearly not already out there and accepted. Maybe it’s because of your subject matter that you’re marginalized. It might be because of who you are, or it might be because of the form that you’re using; you’re staking a claim. That can be with any sort of identification that you can think of. Now we have access to the greatest library in the history of the world (the internet), so to deny that for whatever reason is damaging. We have access to everything. The goal is to sustain and create difference, not to combat it or look for solidarity of some sort. To sustain and create difference means that you have options. There are more options for us than for our parents or grandparents combined. For all generations forward, every option is open.

GM: It’s a struggle in some ways, because it’d be so much easier if I just drew all the time. It’s post-medium, post-studio, whatever “posts” I can throw in there. But it’s the immaterial object. I don’t mean conceptual like it’s not here, like a wisp of smoke. It’s that the object isn’t that important, and it’s not revered. For that reason, I do the same project over and over again, so that there’s not one single execution of it that’s more important. It’s important to follow the ideas that are underpinning the work in general, and if that leads me to a piece that will be more performative or sculptural, that’s fine. I don’t want to restrict myself to doing something because I’m a painter or whatever. I’ll get the idea, and I start working with it, and the pass for me is to break it apart so that it’s never contained in a single mode: it’s the documentary photographs, it’s the performative elements, it’s the actual object, it’s the paratext, it’s the reception and display. A single audience may never actually see the whole piece in its entirety because its spread apart spatially and temporally. 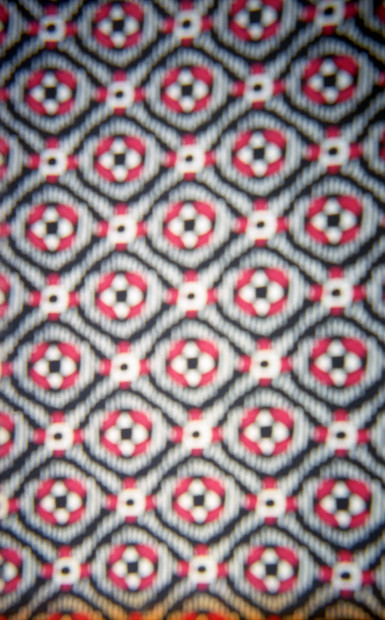 LMF: You don’t follow the model of an isolated artist who makes beautiful objects to be purchased at high prices.

GM: It’s a shitty model. It’s kind of a one-percenter model, and that’s not interesting to me at all. Because a lot of my work is produced and executed in public, and exhibited in public or shared spaces, I’ve thought a lot about the work being ignored. I love that. You also have to prepare for people to break or steal art too, which I guess happens in galleries to a much lesser degree. I think being ignored is an important part of making. Making art is knowing, why should anyone give a shit about this? The idea of identification is a fascinating topic. With whom do we identify? And what processes must go into play for that to happen? It’s kind of an act of love: you’re doing this for an imagined community of people you don’t know, but you imagine that they’re there, and they are there somewhere, and that’s an act of love to someone you don’t know. 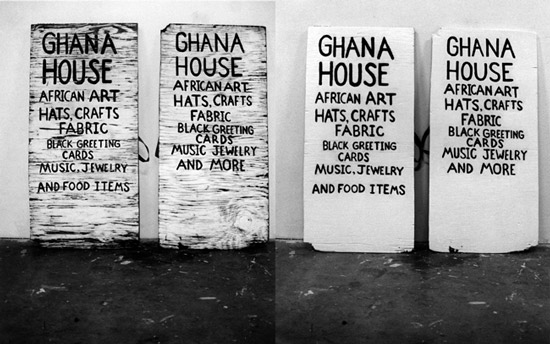 An outdoor sign is stolen, sanded, repainted, and returned to the store before it reopens the following day, 2005

LMF: Is making a living as an artist possible?

GM: The more time you spend with a project, what’s important rises to the top. For me what is valuable is a good jpeg that I can show to talk about my work, or apply with. So in terms of making a living and making money, in some ways you’re making your name. 75% of my work is just a jpeg. It has been lucrative in some senses and not so helpful in others. The work is so seemingly scattered that it means that critics, writers, curators, whoever is interested in me, has to do more work. Most people wouldn’t think of me for a drawing show, for example. I like to problematize everything, especially my relationship to the world immediately around me. So, like watering the crack in the pavement: that’s the path I took to work through a very wealthy neighborhood in DC. It was really local, just right below my feet. My projects begin like that. It comes from a very immediate place. 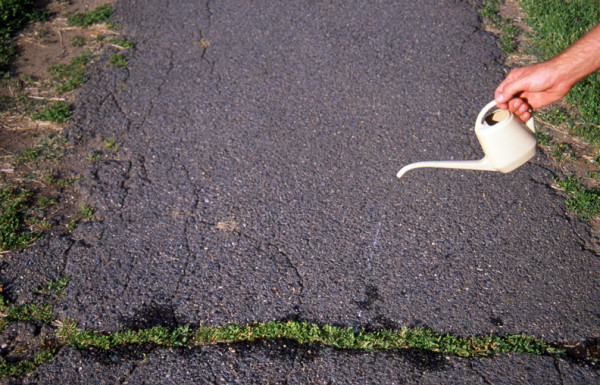 Cracks in the pavement are watered with Miracle-Gro (Rose Park), 2005

LMF: How is teaching part of your practice?

GM: I’m not teaching, I’m learning. Collective learning and collective production is generous from all people who are interested. Interacting with artists and students through teaching is something I enjoy. But also congregation is a really important thing; it’s important to be able to get together with people and talk. I want Alabama Song (http://alabamasonghouston.com/) to be a free space of collective learning with open-sourced programming. I’ve always had this belief in making a scene instead of playing by the expectations of one already in place.

Gabriel Martinez received his MFA from Columbia University in 2009. He has been a CORE Fellow at the Museum of Fine Arts Houston, was an artist-in-residence at Project Row Houses, participated in the Whitney Independent Study Program in New York City, and attended the School of Sculpture and Painting in 2010. He is an Interdisciplinary Art professor at the University of Houston and runs the Alabama Song art space in Houston.

A Coin to a Cat: An Itinerant Drawing...

Brilliant artist, saw his work in D.C. and NYC, must visit Alabama Song!

Many good points but some of the language is dismissive and relies on humor too much. Disarming a reader or viewer through humor has worked in the past but it is a strategy that calls out for also being evasive in some circumstances. Irony seems to be dictating the artists focus and that is unfortunate. Our society seems to be corrupt in irony and cynical actions; tv, films, literature, politics and art. It is transgressive and no different than the artwork that is being shown here. Not all of the work is this way but there seems to be a need to be ‘friendly” and happy in order to be socially accepted. A dumbing down of the artist when it isn’t necessary. It’s great that he makes his points but then he doesn’t back them up with solid reasons but cuts off his thoughts with irony.