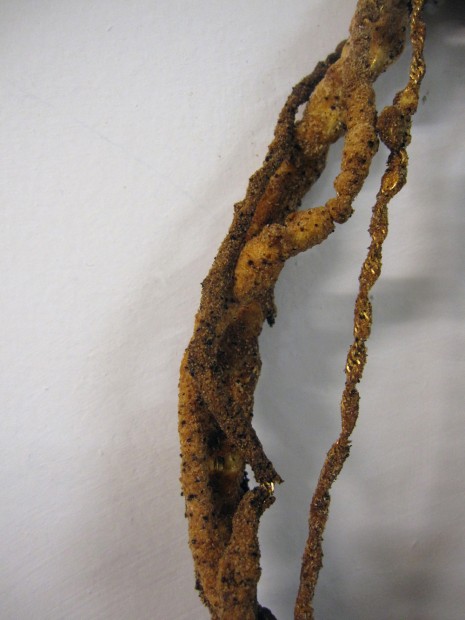 Gold is on people’s minds a lot lately—more than usual, what with inflation worries, “End the Fed” protests and calls to return to a gold standard. People fear their dollar bills may soon be worth less than the paper they are printed on. As overhyped as these concerns may or may not be, food prices are indeed rising globally. Wealth is fine, conventional wisdom tells us, but you can’t eat gold. It is this sentiment, in this context, that Ryder Richards pushes back against.

“Anything can be made better by deep-frying it,” he writes in his artist statement. Richards’s piece, Fried Gold: Best Idea Ever, is the highlight of Co-Modify, on view at Victoria’s Nave Museum through January 21. The piece consists of four battered and deep fried, gold-plated necklaces hung on an otherwise bare gallery wall. What better symbol of vapid, self-destructive consumer gluttony in a year when deep fried butter was the biggest hit at the Texas State Fair?  The fact that the necklaces are not even solid gold, but gold-plated, drives the point home even further—the “gold” is really just a base alloy with a surface-level gilding—its depth measured in micrometers. Even the fried batter coating is thicker than the layer of gold.

If Damien Hirst’s diamond-encrusted platinum cast of a human skull, For the Love of God, lampoons the absurdity of what the “art world” has become, then Richards’s piece might be viewed as its more budget-conscious counterpoint—bringing the viewer to the same conclusion via the dollar store rather than the auction house. 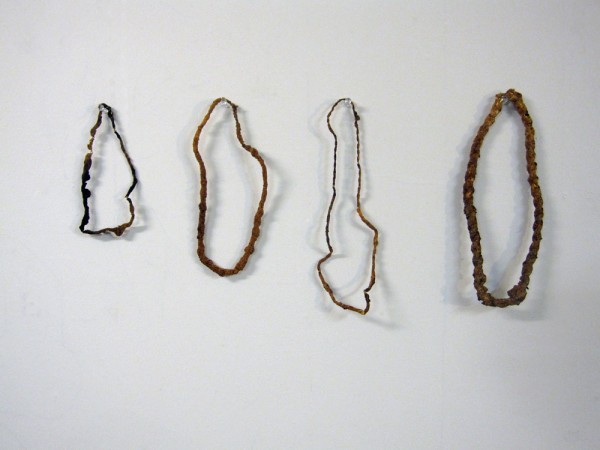 Traditionally, Walter Benjamin reminds us in his seminal essay “The Work of Art in the Age of Mechanical Reproduction” that what we now call “art objects” were valued for their magical properties, for their ritual uses. Statues were revered as idols; cave paintings warded off evil spirits or served as harbingers of successful hunting expeditions. Benjamin calls this the “cult value” of works of art.  He contrasts this “cult value” against the later development in art history/appreciation, the “exhibition value of the piece.”

The Co-Modify show, curated by Shreepad Joglekar, claims to “[respond] to the social condition in which all value is monetary and reality itself becomes a product.”  With the exception of Richards’s piece, however, the works in this exhibition generally fail to engage with the idea that art, too, has become commodified, a product valued either as a monetary investment or as an inert, pretty, decorative thing.

The necessary first step, it would seem, in challenging the idea of “art as product” would be to bring the Art down off its pedestal, to smash the “fourth wall” (in the language of theater), to erase the standard “ten inches rule” which requires gallery visitors maintain a minimum distance of ten inches from the object on view. 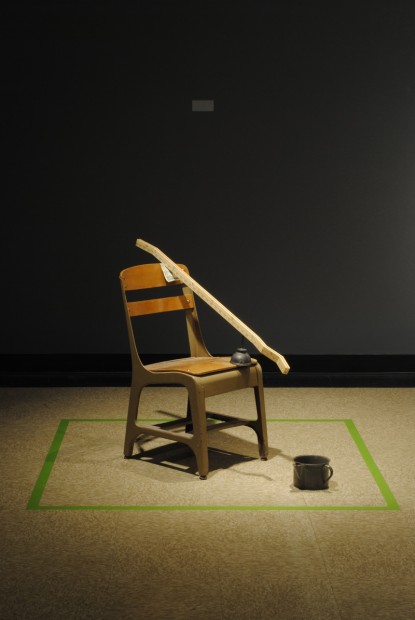 Ian F. Thomas’s pair of sculptures Redistribution, Mis-en-Scene and Putting on the Dog start to do that by inviting viewers to slide pennies—money, quite literally—down wooden ramps and through a plastic vortex. Not only do these pieces begin to bring Art down off its rarified pedestal, away from its status as an inert object, they subvert the idea of commodification by subverting the very idea of money. Pennies become toys in the presence of these pieces, and the audience goes from passive viewing to active participation. 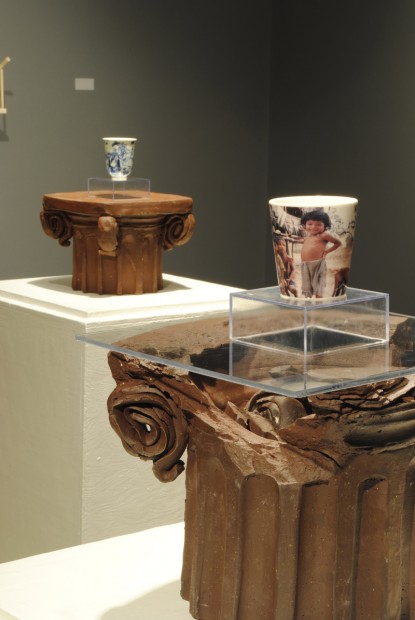 Nearby, Dryden Wells’s Now and Now, a sculpture in two parts, literally questions the elevation of “art on pedestal” by placing mass produced ceramic mugs on Plexiglas boxes above a mirror so that the mirror reflects the barcodes on the underside to remind viewers that these are mass-produced objects, which then rest on broken Ionic columns (i.e. pedestals) painted an ugly brown, which, finally sit atop plain white, standard issue art gallery display pedestals. One mug looks like it could be an antique—bone-colored porcelain with traditional scenes of  the Chinese royal court in blue paint—but the stamps on the bottom show it is the product of an assembly line. The other looks like a Walgreens photo mug—seemingly personalized with the reproduction of a snapshot from its owner’s travels—but the logo on the underside reveals that it was made by Nescafé. 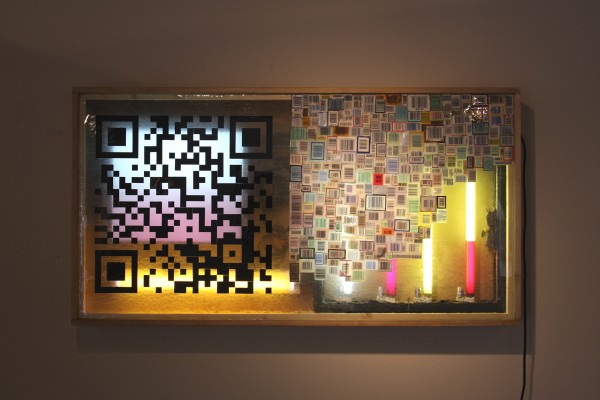 Jonathan Whitfill’s Proof of Purchase, a light box with back-lit, old-school barcodes juxtaposed with the newer “quick response”-style bar code, looks pretty but fails to say anything new about bar codes. It has been at least 30 years since punk rockers the world over tattooed the first bar codes onto the backs of their necks, and since then, Chuck Close-style pixilated barcode (QR code) paintings have almost become clichéd. In his artist statement, Whitfill waxes nostalgic for “traditional” bar codes, as the new-fangled QR technology simply does not captivate him. Perhaps if he had worked bar codes into the title card of his piece, or if the piece allowed viewers to scan his QR bar code with their cell phones, he could have added a conceptual element to the piece, but as is it just leaves the viewer wanting more. 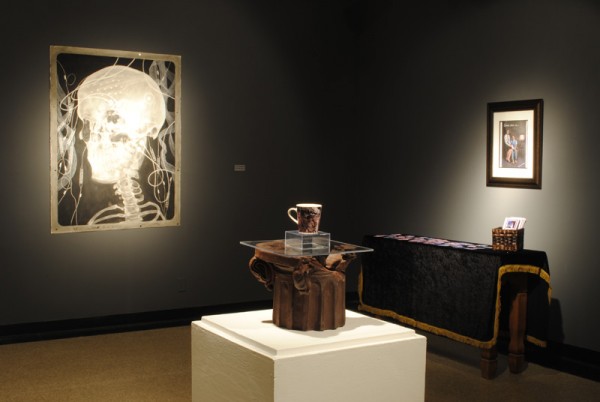 Sue Ann Rische’s Once and Future (mixed media drawing), is a beautiful meditation on the commodification of our bodies through health care. The 3’ x 6’ drawing resembles an x-ray image of a human head and neck with diodes attached.

The show contains the work of 11 artists, all part of the Culture Laboratory Collective. While the show fails to come together to make one, unified, cohesive statement about “reality as a product” and makes no discernible attempt to broach the idea of “art as product,” this viewer still found it worth the drive to Victoria from Houston.  Should you choose to make the trek yourself, be sure to stop by the art car installation at the nearby five points intersection, where you will find a giant spider/piano hybrid with a teapot in a glass dome made by Mel Chin.

[Correction: Jonathan Whitfill’s QR code does indeed point viewers back to his website.]