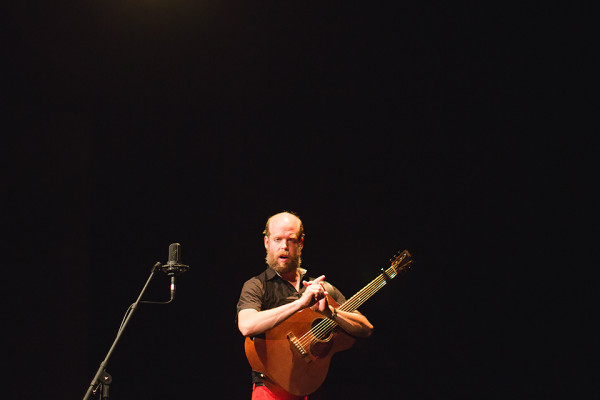 Translation must in large measure turn its attention away from trying to communicate something, away from meaning; the original is essential to translation only insofar as it has already relieved the translator and his work of the burden and organization of what is communicated.

I first heard Bonnie “Prince” Billy, né Palace Brothers, in 1994, in a dorm room at Herron School of Art in Indianapolis. I grew up in southern Indiana, about 2 hours west of Will Oldham‘s hometown of Louisville, so I thought of Palace as a local band. In the two decades since, BPB has provided the constant soundtrack to my late-youth-becoming-adulthood. iTunes tells me I have – gulp – 475 tracks of his music, out of 4312 tracks total in my library. That’s over 10%. It’s not easy for me to be objective about BPB; in fact, I’m not really going to try.

When my wife and I first met and started dating, mixtapes were still a thing. I made her one – a 90’s era love letter, I suppose – and put some Oldham tunes on there as a litmus test. That was sure to weed out any incompatible sensibilities. What happened was we’re still together 17 years later and she’s a bigger fan than me. We listen to it together, or separately; we discuss the songs and the method; we don’t care about following music industry news, so all we have to go on are the recordings. The records are alternately defiant, searching, demonstrative, inward, unsure, failing, proud, stubborn, and more. (We don’t, in an important sense, care about BPB as an actual person. The music belongs to us, and he can’t tell us what it means.) Of those 475 tracks, there’s a decent chunk I never listen to because I think they’re awful. That makes me like him more. Fail again, fail better.

Ok, enough with the sentimental paean. I want to write a little about BPB’s concert in Marfa, held at the Crowley Theater on July 12, an event hosted by Ballroom Marfa. But there’s another stop to make first.

Writer and translator Kareem James Abu-Zeid was a Lannan Foundation Resident in Marfa this summer. Earlier on July 12, in the underlit space of the Marfa Book Company Annex, he read his translations of poetry from the Arab world, along with a few of his own unpublished poems. A black room with dimmed lights – how was Abu-Zeid even able to see the text in front of him? – reinforced what was by any measure a dark selection of texts.

Because he is an extremely well informed scholar, he presented a brief historical context for each of the authors. And because recent literature from the Arab world is so unknown amongst American audiences (or to me, at least), these historical sketches had to be brief and painted with broad strokes. What’s more, Abu-Zeid was describing a political and cultural territory that most of us only know through the distorting mechanisms of “breaking news” – inevitably such news involves body counts, names of weapons, and disputed borders that we might have trouble finding on a map, to say nothing of our ability to account for why that border is in dispute at all.

What I really want to emphasize, from my perch as a listener, was my ignorance. Ignorance of the politics of the region; of contemporary poetry; of the problems that pertain specifically to translating this material; of the challenge in presenting it to an audience in West Texas. What I observed was that the language Abu-Zeid used in his translations – in particular for the works that were most directly addressing the military conflicts in the region – was very direct and simple. It was not language that was, on its own, poetic, in that classic sense of ornate and allusive. My assumption is that the original Arab was similarly direct, and Abu-Zeid’s role as a translator was to preserve that character in each poem’s new English form. When Abu-Zeid concluded with three poems of his own, the language opened up considerably to musicality and evocation. One piece even included a repeated stanza that functioned like the chorus of a song.

Reflecting on this evening of Arab poetry, I began to think about Walter Benjamin’s 1923 essay “The Translator’s Task”. Benjamin has a lot to say in this dense text, but the idea relevant for me concerns the independence of the translation from the original text. I’d rather leave Benjaminian exegesis to a Comp Lit PhD candidate, but I keep circling this question of how to approach what Abu-Zeid read in the absence of any lived understanding whatsoever of the historical dynamics of the region. The darkness of that annex room symbolically shifts from “grim content” to darkness as not-knowing, as the absence of reference. I’m left then with poems arriving from nowhere, or as Benjamin would put it, arriving as pure language. Benjamin says this is the true task of the translator, to discover the language for a work that joins it to pure language, freed from the intended object. And there we were, in a black space, awash in language, and nothing but.

In this pure language — which no longer signifies or expresses anything but rather, as the expressionless and creative word that is the intended object of every language — all communication, all meaning, and all intention arrive at a level where they are destined to be extinguished. -WB

I’ve seen Bonnie “Prince” Billy a few times over the years, but always with a backing band. For as solemn as the records can be, the bands rock out on stage. At the Crowley, BPB was solo, standing with an acoustic guitar for most of the evening, except for a few tunes when he was joined by the excellent Matt Sweeney, and then when he closed with Sweeney and Dave Ferguson all on stage. An exceptional feature of the Crowley Theater is that quiet really equals quiet. Please don’t breathe quiet. Since BPB’s songs are frequently full of quiet, this made the intimacy of the show all the more affecting.

Seeing the older shows, and hearing lots of live recordings, prepared me for the fact that BPB is always re-working his songs, often drastically. The musical support is subject to the most obvious changes. The lyrics are typically delivered as written. Because his lyrics are so considered and compact, when he does change or add a word, it has impact. But most remarkable is the elasticity of his phrasing, so that the exact lyric comes through with an entirely unexpected resonance. A song I’ve heard a hundred times suddenly sounds fresh, and strange, and urgent. By feeling new, the song also feels inhabited, it feels like it is in the present.

I’m reminded of an old timey music joke told by Ron Thomason. He once asked the aged ballad singer Cas Wallin to explain the difference between “Must Jesus Bear the Cross Alone” and “Amazing Grace”, since they seemed to have identical melodies. Wallin paused a moment and answered, “The words.”

I looked at the nytimes.com homepage the other day, and it was a damn mess. Russian-backed rebels shooting down a Malaysian passenger jet, Israel invading Gaza, and immigrant children crossing the US border into a domestic politics shitstorm. But I had a solution, of sorts. Click the browser closed.

Abu-Zeid took a question from the audience after his reading, in which he was asked how he avoids getting completely inundated by the tidal wave of troubling news coming from the Arab world. He answered that it is a challenge but he doesn’t engage much in social media and the like. Doing his work takes precedence over following the latest developments. It’s a tricky balance, because the writing coming from the region is embedded in those developments. And yet the writings of Darwish, Mikhail, and Jaber are not journalism. They are not even testimony. A burden exists for these writers, that their texts must, in some way, leave all that mess behind.

Now you might object – isn’t leaving that “mess” behind tantamount to leaving their own selves behind, to discarding their own subjectivity? Yes! What other choice is there in the pursuit of art? Would we really read someone’s diary because we cared what time he got out of bed? Or do we read it to find a place for ourselves, a place given shape by someone who took the risk of confronting situations where we lack the opportunity, or nerve? That is, to last, the poet’s subjectivity must be vacated from the space of his text. The translator’s burden doubles down: inhabit that space, make it his own, make it empty again, make it ready for the next tenant.

It is in this sense – fill, vacate, fill again, vacate again – that I regard Bonnie “Prince” Billy as translating his own songs. The word we usually get in this situation is interpret rather than translate. But interpret suggests a lasting connection to the original intention, with a twist maybe; translate suggests a new, freestanding thing. I can’t help but feel, because of my long commitment to the music and texts of BPB’s work, that my own subjectivity is shaped by it. He has long had the ability to write things that were wholly specific and yet I claimed them as my own, things I wouldn’t have had the clarity or courage to put voice to.

I’m sorry, if I were a better writer I could have come to the point sooner. It’s the words.

It sounds improper to say that BPB’s performance was so effective because it proceeds from the premise that the lyrics have no meaning. It sounds improper…and feels right. BPB stands there singing, engaged in a bewildering array of facial ticks and bodily convulsions, like he’s in a trance. We’ve all seen the movies: the person in a trance speaks against his will, and when he comes to he doesn’t know what he’s said. For the speaker it was just words, no syntax, no intentionality, no object. Now, I’m not in the least suggesting that BPB doesn’t know what he’s doing. Quite the opposite – he’s a polished and professional performer. What I am saying is that, as an artist, he’s risking failure and incomprehension by repeatedly draining his own works of their signification. As if to say to the audience, “Oh this is how you’ve always understood that lyric? Well let me subvert it completely!”

Our subjectivity, each of us, is bound into our language in myriad criss-crossing and contradictory ways. We can perhaps disentangle some of the knots and be clearer to ourselves and others, but we cannot avoid being utterly embedded. Benjamin concludes his account of the “pure language” that is the translator’s pursuit by noting that the only endpoint to the bottomless depth of language is divine revelation. BPB sings pungently about the corporeal character of his own being, and alongside that is a constant query, an appeal to a God whose presence must be read between the lines. There is a burden in being a subject, in being subjected, and to lose that subjectivity into the space of pure language is a transcendent plunge, four minutes at a time.

Feeding Frenzy (for a Good Cause)