No room for Vader; Mel Chin’s Funk and Wag 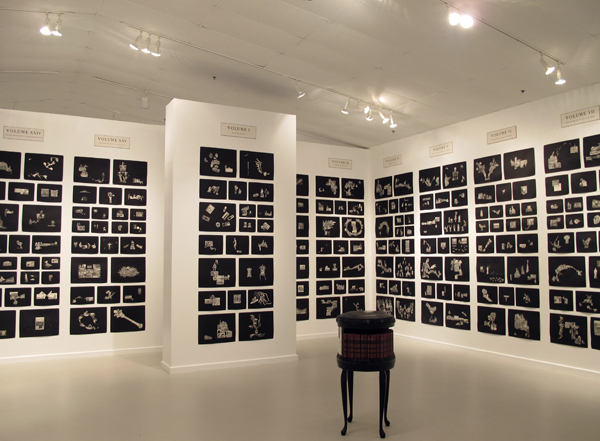 Two months ago, The Station Museum’s Artifactual Realities closed. Unfortunately, I first visited the exhibition a couple weeks before the end and only had a short time to really absorb and enjoy the show’s strongest piece: Mel Chin’s The Funk and Wag From A to Z. If you missed it, Chin’s website gives you a decent sense of the work. Today, I still miss the experience and I’m still trying to sort out why it was such an arresting installation, one with which I crave further encounters. 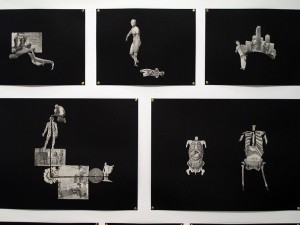 Chin cut out the images from a set of the Universal Standard Encyclopedia and rearranged them into potent narrative clusters that run the gamut from chuckles to heartbreak. Hundreds of collages, and here quantity becomes as important as quality: this sucker is not just from the encyclopedia, it is encyclopedic. It overwhelms and overreaches in its statements, it cannot give you the totality of human knowledge, but its attempts are admirable and its limits are instructive. It creates bright points in the vast ink of history that a reader may reconfigure into innumerable constellations.

I found The Funk and Wag heartening. Quality work should always be celebrated, but I also feel the need to talk about the way its presence managed to escape the Blisterpack Effect of so much contemporary art without feeling the least bit reactionary or timid. The BE is any visual strategy that marks the work as worthy or collectible, but seems unnecessary in the articulation of a work’s messages or functions. 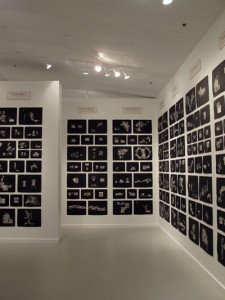 Here’s an example of BE that I keep encountering in contemporary photography. 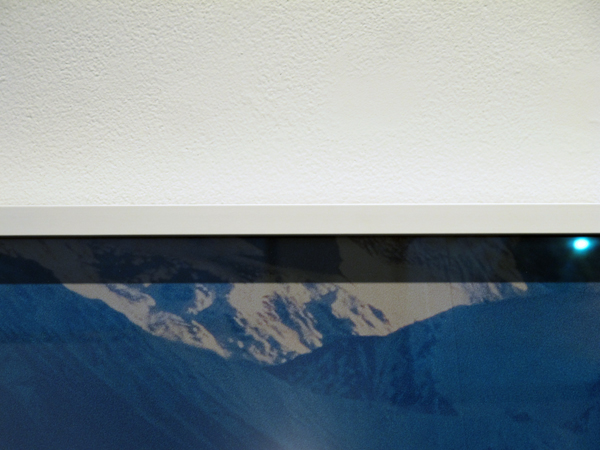 My Dread Line. The occlusion is usually minute but the implications are substantial enough to cast a rather large shadow upon my mood.  This line is money, it’s hierarchies, it’s experience taking a backseat to ownership, it’s Danny DeVito spitting out Mamet-speak.

Obviously, artists have to protect their product, safeguard the work’s value. Unfortunately, the Blisterpack Effect is not inert.  The BE forms an aesthetic layer that sits on top of the work and does not participate in its primary meanings and sensations. The layer marks the work as an item worthy of collection and preservation; it is faery sheen.  The BE, without necessarily negating those meanings and sensations, has the potential to turn any art space into The Cloud City. 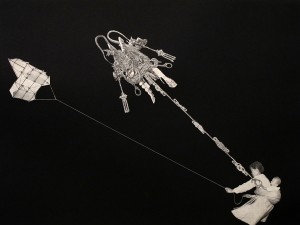 The Cloud City, where Han Solo is captured by the Empire, is the site where nerds of a certain age first felt the full power of the BE. Darth Vader and the Empire are not interested in erasing Solo, or even in refuting him; the effort would validate the rebellion as a threat and as a remedy to the evils of Palpatine.  Instead, Han is encased in Carbonite. The Empire does not erase him; it confines him, and transforms him into a possession. Han’s vitality is not so much dealt with as it is suspended. This idea was powerful enough to break out of George Lucas’ fiction and into our private rites. You too could own Han trapped in Carbonite. Your play was no longer circumscribed to rebel actions, you could be The Empire, you could own the rebellion. 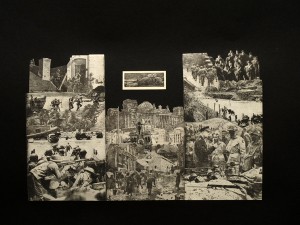 The Funk and Wag shoots first; it will not be contained.  Its first success is to become the room. Obviously, these white walls predate the work but they no longer feel like a platform. Standing in the midst of it, eyes jumping from image to image, cluster to cluster, I was not scanning information but rather I felt as if I was riding an engine.  The room was no longer an exhibition space, for these walls were now a structural necessity for The Funk And The Wag and so they were enveloped in the engineer’s dreaming.  It was reminiscent of Richard Serra turning galleries into sculptural spaces using only drawings. If only for the duration of the show, the room did not belong to The Station Museum, but only to Chin and his Funk. 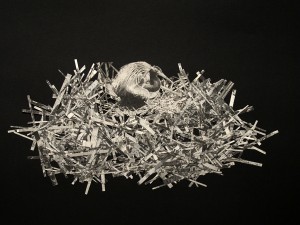 The Funk and Wag makes beautiful use of history. First, by referencing Punk’s granddad, Dada, and then turning that stylistic reference into something unexpected. It does so by forcing those Dadaist echoes into the encyclopedia’s alphabetical structure. The structure mitigates Dada’s more reactionary leanings and the style infects the rigid structure. We are left with something that calls to mind the Celestial Emporium of Benevolent Knowledge in the way it addresses the multifarious ways knowledge happens. This double action works on the micro level as well with the illustrations from the encyclopedia clearly aiming for the authority of textbook facts being forced into Chin’s oneiric tableaux. There is a delicious push and pull between private meanings and public declarations, between the individual and the collective, between cognitive certainty and affective possibility, between music and lyrics.  It is a very seductive piece. 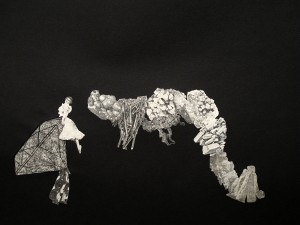 The Funk and Wag is smart about materials because they don’t just support ideas, they are ideas.  The illustrations provenance and style allow all sorts of cultural and personal echoes. If you grew up in a house with a musty encyclopedia that predates your existence or at least your ability to read, they don’t just point at past experiences, they actualize a mutation of those experiences. The glue is archival and the backing paper is imported and so the teenage sneer of a reactionary anti-aesthetic is avoided.  And yet, those same materials avoid monumentality, exclusiveness and Danny DeVito.  They are quality but none come close to invoking the Blisterpack. 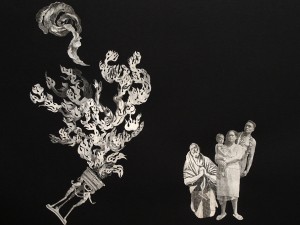 I wish this was a reference, that it had a permanent home in Houston. I would look forward to visiting it periodically over the months and years.  I think it would be a sturdy machine for producing unexpected meanings out of life’s inevitable accumulation of experiences. 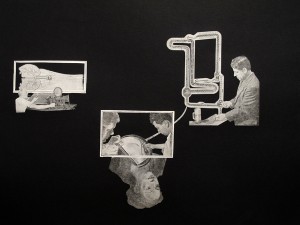 We are so fortunate to have seen so much work by Mel Chin this summer in Houston. Hope he continues to exhibit here. Great talent and really nice guy.