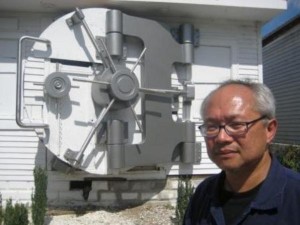 Native Houstonian Mel Chin’s 40-year retrospective of sculpture, video and installations at the New Orleans Museum of Art (NOMA) opened on Thursday with a panel discussion and on Friday with the opening reception party. Organized by NOMA Curator of Modern and Contemporary Art Miranda Lash (an honorary Houstonian for her tenure as curatorial assistant at the Menil Collection), the exhibition is already getting a lot of attention, enthusiasm and press. It’s not just New Orleans art lovers who are enjoying the show; there seems to be a refreshing mutual admiration between the artist and curator, as recorded by Gambit (bestofneworleans.com):

Finishing up an interview on the eve of the opening of his first-ever retrospective, Rematch, which includes more than 70 works of a lifetime of art, the artist looked dapper and pleased, crediting the museum’s curator of contemporary art, Miranda Lash, for the show’s exquisite use of space. “It’s her show,” he said smiling. 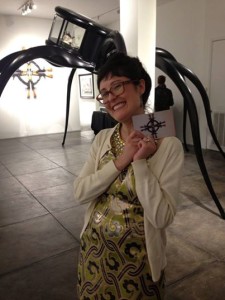 Miranda Lash in front of Chin’s Cabinet of Craving, 2012, at a concurrent show at Jonathan Ferarra Gallery. Photo: Jim Mulvihill

Congratulations to Mel and Miranda!