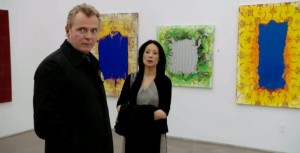 Thanks to the keen eyes of some TV crime drama watchers at GalleristNY, someone noticed that the paintings in last night’s episode of the CBS show Elementary were those of Houston’s homegrown Mark Flood. The plot apparently sets the gallery, which is actually the Zach Feuer gallery (where Flood’s solo show last year was simply called “ARTSTAR”) as a money-laundering front for all sorts of shenanigans discovered by the updated Sherlock Holmes main character.

This is not Flood’s first experience inserting art into a TV series. In the late 1990s, he was a member of the GALA committee, a collaborative formed by artist Mel Chin, which placed artwork and props into the set of the popular Melrose Place.