Review: “Movement: The Legacy of Kineticism” at the Dallas Museum of Art

One of my most memorable experiences at the Dallas Museum of Art (DMA) was taking my 8th grade art students to see the 2008 exhibition Take Your Time: Olafur Eliasson. Filled with immersive light installations, the show was transformative for my class, who had always thought of art in more traditional terms. So, when the DMA announced Movement: The Legacy of Kineticism, featuring a piece by Eliasson along with other light-based installations and works rooted in kineticism, it was at the top of my list of exhibitions to see in the fall. While some aspects of the show’s layout were underwhelming, overall the depth of the exhibition was impressive, bringing together works from across a century and across continents. 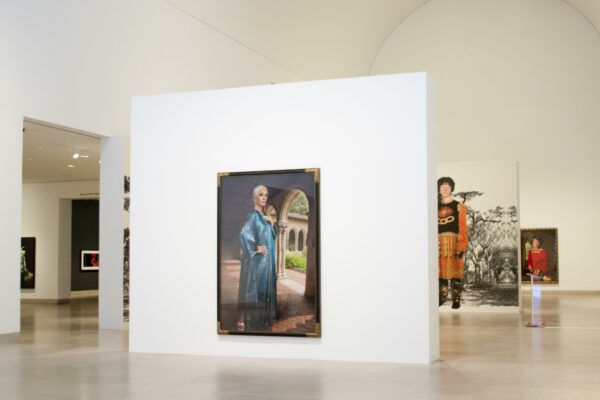 Movement is on view in the DMA’s Barrel Vault galleries, a space which was originally home to Claes Oldenburg’s Stake Hitch. Since the removal of that site-specific piece, the space, along with four adjacent square Quad galleries, has most often been used to host temporary installations of contemporary art. Over the years, the large, open Barrel Vault has been transformed to respond to the work on view. In 2013, temporary walls were built in the center of the space to hold large-scale photographs in Cindy Sherman’s retrospective. In 2019, for the Dior exhibition, stair-stepped platforms lined the sides of the gallery, and the back wall featured about a dozen lit arched windows showcasing couture dresses. However, considering the DMA’s precedent of impressive presentations in the space, even when taking into account Movement’s showstopping entrance piece, the larger Barrel Vault section of the exhibition falls flat. 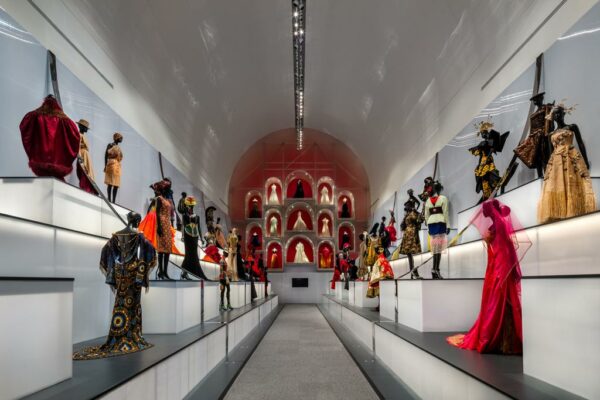 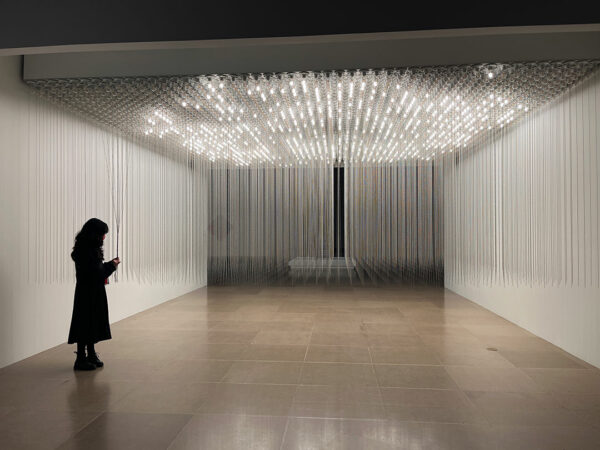 The first work viewers encounter, Vaga Lume, which is Portuguese for “firefly,” is an interactive installation made up of a grid of thousands of simple light fixtures, each with a single light bulb and a nearly ceiling-to-floor-length metal ball pull chain. Visitors are invited to not only walk through the installation, but to gently pull the chains to turn off or on the lights as they move through the piece. Wandering through the chains is reminiscent of wading through calm waters — each step forces a small sway in the otherwise still environment. And while each participant’s decision to activate the lights varies, the action can leave a trace of a person’s movement even after they are gone. 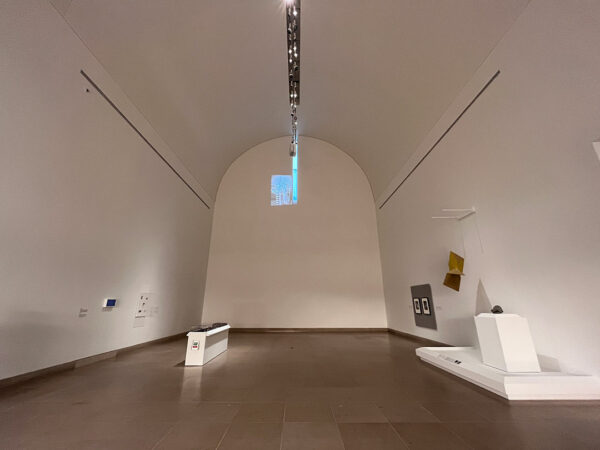 Installation photo of “Movement: The Legacy of Kineticism” in the Dallas Museum of Art’s Barrel Vault.

Emerging from Vaga Lume and looking across the Barrel Vault to a sparse arrangement of works and an oddly placed vertical video high up on an otherwise empty white wall is an unexpected visual disappointment. The left side of the space holds small-scale jewelry pieces presented in a floor case and a mounted wall case, which has a small video to its left. The right half of the gallery displays larger, but still mid-sized works, including photos by Carlotta M. Corpron and two abstract sculptures. Though these pieces add to the scope and depth of the exhibition, which otherwise heavily focuses on painting and installation, they are dwarfed by the vast empty space around them. The area could be stronger with the inclusion of additional photographs, sculptures presented in the center of the gallery, or the video work, by Trisha Donnelly, projected larger against the back wall. The Quad galleries, on the other hand, are where the exhibition truly shines.

An introductory section in the Gayle and Paul Stoffel Gallery, titled Before Kineticism: Utopia and Utility in the Avant-Garde, provides historical context from the 1910s through the 1960s, and highlights significant Latin American works alongside better-known European pieces. I was pleasantly surprised by the presentation of a painting by Piet Mondrian, which is flanked by works by Uruguayan artists Rhod Rothfuss and Marco Maggi, as I have not often seen Mondrian’s art in conversation with South American artists working in similar styles. The gallery also includes a hands-on activity and a small reading nook, though again, the design of the space could have been elevated by including a splash of color to bring energy to and offset this area from the rest of the white-walled gallery. 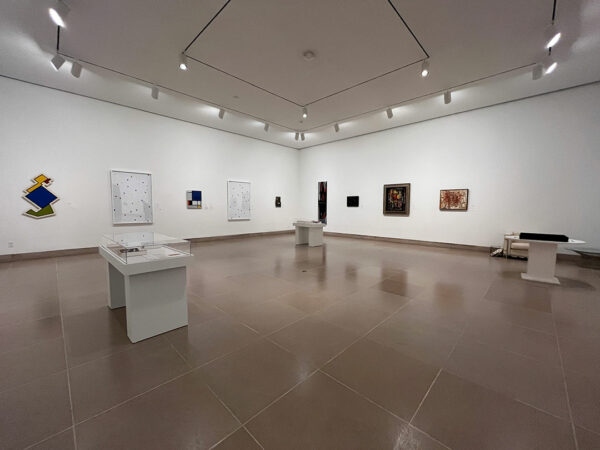 “Before Kineticism” part of the “Movement: The Legacy of Kineticism” exhibition at the Dallas Museum of Art. 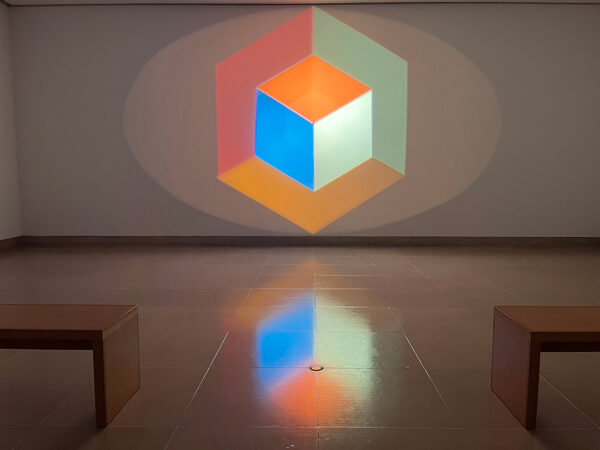 The remaining three Quad galleries each hold a meditative full-room installation — Olafur Eliasson’s The outside of in, Tomás Saraceno’s Sounding the Air, and Ricci Albenda’s Panning Annex (Albert). In the Nancy and Tim Hanley Gallery, Eliasson’s 2008 light projection uses 24 analog spotlights, rather than the expected single-channel video projector, to create a slow methodical presentation of colors and shapes. The lights build and deconstruct over the course of 12 minutes, and in the process create new colors and shapes through overlapping projections and imagined afterimages created by the viewer’s mind. This captivating piece is undoubtedly one of the strongest works in the exhibition. 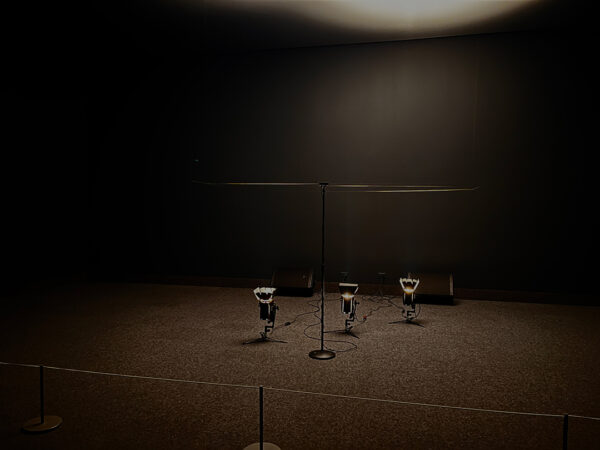 Saraceno’s Sounding the Air, previously on view in Sound as Sculpture at the Rachofsky Warehouse, is presented in a darkened gallery with three ground-mounted spotlights pointing toward the ceiling. Viewers are unable to get close to the installation, so without reading the text panel some may miss that the lights illuminate suspended strings of spider silk. The heat from the lights causes the silk to undulate, and these movements are picked up by a receiver and translated into sounds. Just as the works by Soares and Eliasson are partially activated by the viewer’s presence, Saraceno’s delicate silk threads fluctuate with the breath and presence of an audience. 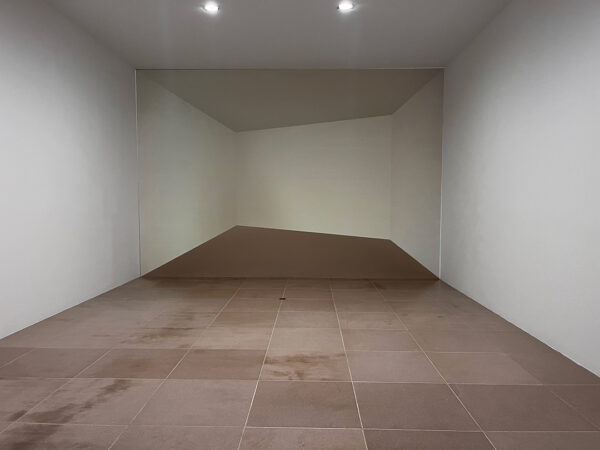 Albenda’s Panning Annex (Albert) is a minimal video projection on the back wall of the gallery, and at times appears to be an extension of the space. The video is a 360-degree panning loop that rotates the projected walls and floor, creating an illusion of distorted space. The effect is an ever-changing sense of (un)comfort and (in)stability. One moment the room feels stable, and with the blink of an eye the space becomes unsettling, and at times dizzying. Created in 2007, this piece is a continuation of Albenda’s play with space and perception. His earlier Portal to Another Dimension series of fiberglass sculptures, when presented on white gallery walls, create the illusion that the wall is dented or bulging. Unlike the other immersive works in this show that are changed by audience participation, Albenda’s projection operates on its own, filling the space no matter who is there to see it. 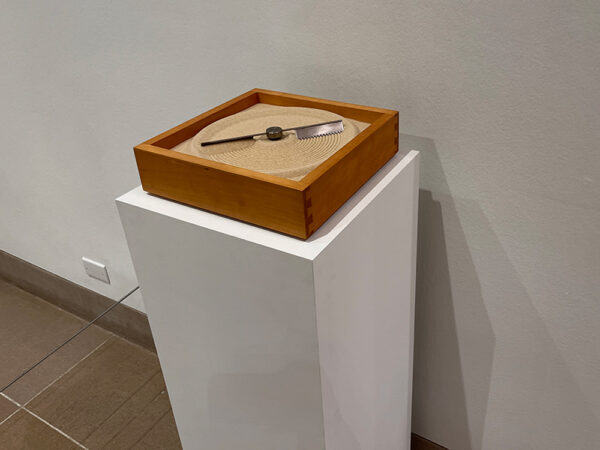 Other works dotting the exhibition include one of my favorites from the Rachofsky Collection, Mona Hatoum’s + and –. Though the placement of Hatoum’s small-scale mechanized sculpture (just outside of the Cindy and Howard Rachofsky Gallery that holds Albenda’s Panning Annex (Albert)) feels awkwardly tacked on, it does create a subtle conversation between the two works, which each feature a continuous 360-degree rotation. Hatoum’s work is a small, square wooden box containing a thin layer of light sand and a metal arm which spins inside the square, creating a circle. Half of the arm has comb-like tines that rake and displace the sand as it spins, and the other half is flat, smoothing out the sand as it comes into contact with it. In my past viewings of this piece, I have always considered it a conversation about the infinite, futility, and equilibrium. Juxtaposed with Albenda’s video projection, Hatoum’s sculpture also reveals tinges of destabilization and restabilization.

While the presentation of the exhibition feels empty and awkward in places, a product of the Barrel Vault’s inherent architecture, which is built to elevate monumental works, the individual pieces in Movement more than make up for it. The works themselves are compelling, and it was refreshing to see a thematic show that so deeply embraced cross-continental dialogue. While museums and galleries in general have been working towards presenting a more diverse scope of artists, encyclopedic institutions like the DMA are uniquely positioned to make lasting global connections that, for posterity, will broaden the art historical canon. In addition to exposing visitors to artists they may not otherwise be familiar with, these pairings provide new context for even the most experienced museumgoer — a significant takeaway from an institution that itself writes histories.

Movement: The Legacy of Kineticism is on view at the Dallas Museum of Art through July 16, 2023.

Great review! I really enjoyed reading about the “Movement: The Legacy of Kineticism” exhibit at the Dallas Museum of Art. It sounds like a fascinating and thought-provoking collection of works that explores the theme of movement in a variety of mediums. The description of the “robotic sculptures that appear to be in a state of perpetual motion” particularly caught my attention and I would love to see them in person. Thank you for sharing your insights on this exhibition.