Yesterday, the artist Claes Oldenburg, who was known for his larger-than-life depictions of everyday objects, died at the age of 93. 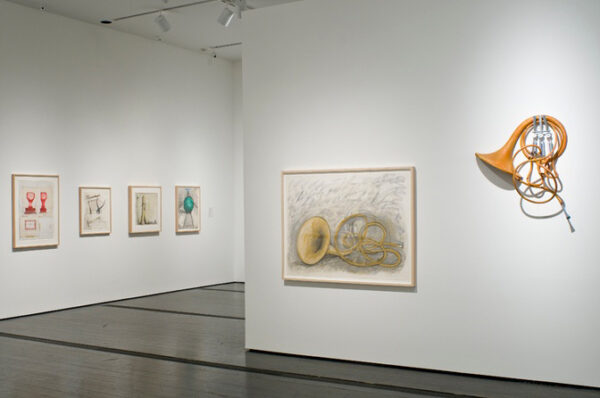 Oldenburg began participating in performance art happenings in New York in the 1950s. Then, in 1961, he opened The Store, which is perhaps still his most famous project (it also served as an inspiration for many other artists.) A year later, elements from The Store traveled to Dallas, where the artist staged a happening at the Dallas Museum for Contemporary Arts.

Texas, with its abundance of space and its love for kitsch, would seem to have been a perfect canvas for Oldenburg. The state’s museums have moderate holdings of his work — many drawings and prints, along with a few sculptures. Houston is home to one of his early large-scale public works, Geometric Mouse, Scale X. 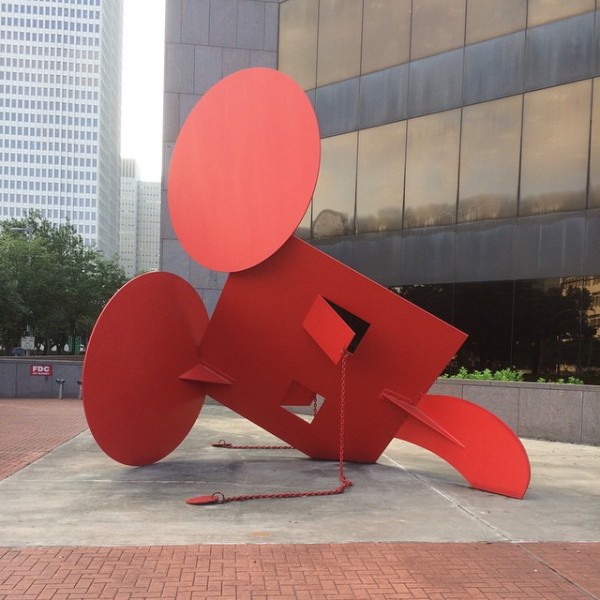 Images of a mouse were longtime elements in Oldenburg’s work, initially appearing in 1963. 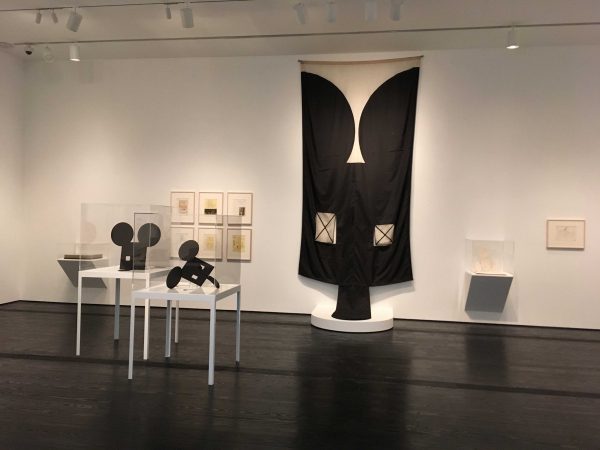 Installation image from “Collection Close-Up: Claes Oldenburg and the Geometric Mouse” at the Menil Collection, 2018.

One large-scale piece that Texas hasn’t seen recently is Stake Hitch, which was commissioned in 1981 by the Dallas Museum of Art and installed in the museum’s newly opened Barrel Vault Galleries in 1984. 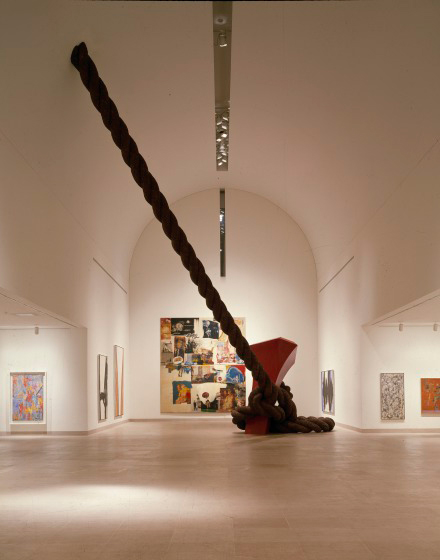 The work, which clocks in at 5,500 pounds, was deinstalled in 2002. On their website, Oldenburg and van Bruggen write of the project:

The challenge, as we saw it, was to reach the upper area of the vault and link it to the rest of the room. We proposed a sculpture in the form of a “stake”, sunk in the floor, to which a rope was tied that extended, in a long, taut curve into the ceiling of the vault. The imagined destination of the rope beyond the Museum added to the scale of the work and gave it an outdoor character. The part of the sculpture sunk into the floor remained mysterious as well: the bottom of the “stake” was executed in full detail but since the part occupied the Museum’s receiving area, it was not available for public viewing. The sculpture in effect became a part of the architecture, a fact recognized both by Barnes and the director of the Museum, Harry Parker.

They continued, telling the story of the piece’s removal:

In June 2001, a new Director of the Museum, John Lane announced his plan to remove the Stake Hitch, which he considered an obstacle to “an active program of temporary exhibitions.” We refused alternative sites for the sculpture, Coosje stating “The Stake Hitch was made for one site only and has no value elsewhere.” Unfortunately a 1990 federal law making it difficult to remove site-specific works relates only to projects done after that date.

Despite its status as an icon of the Museum and one of the “Top Ten Treasures” in the permanent collection prominently featured in the guide to the Museum, and its identification as an icon of Dallas, the sculpture was removed on August 22. The Sol LeWitt mural remains in place and Museum officials have promised that the Stake Hitch would be re-installed for a year during the decade after its removal. At this moment in time, six years later, no plans have been announced for its re-installation. 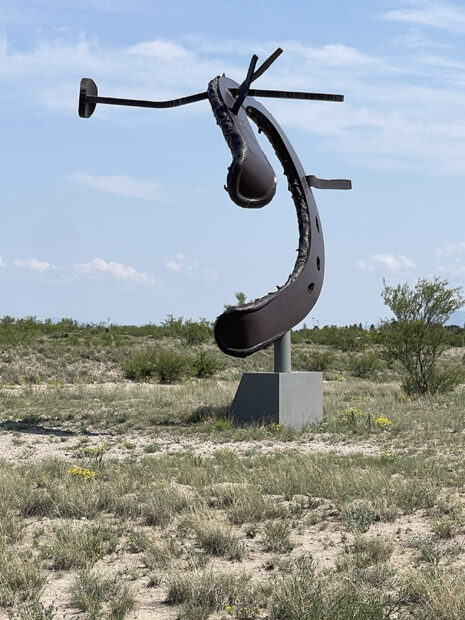 Monument to the Last Horse honors Louie, the last horse of the First U. S. Cavalry, which used to call the Chinati Foundation’s site, Fort D. A. Russell, home. On its way to Marfa, Oldenburg and van Bruggen’s monument summered “in front of Mies van der Rohe’s Seagram Building on Park Avenue, in New York City.” 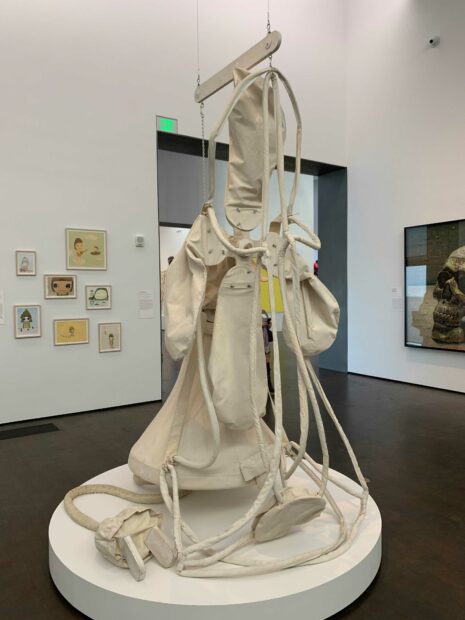 Longtime Houston museum goers will recognize the above piece, which, before the opening of the museum’s new Kinder Building, sat for years either in storage or in a high-ceilinged gallery alongside ab-ex paintings. The sculpture has long been a favorite of mine. It appears to have yellowed over time (it was made in 1967 and almost immediately purchased for the museum by John and Dominique de Menil), but it’s still, in concept and in function, one of Oldenburg’s funniest sculptures. The joke is simple: a fan works because of its rigidity; no rigidity equals an ineffectual, comedic flopping mess. When the work has its fabric cord and plug splayed out across the floor, the punch line is even better. 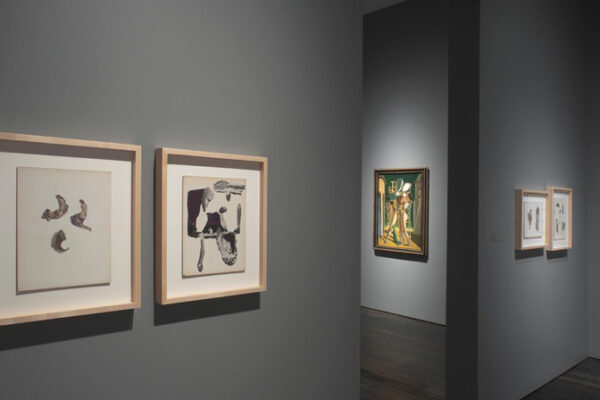 I referenced Oldenburg in an article I wrote about Wayne Thiebaud, following his death last year (please excuse my self-quoting): “The fact that [Thiebaud] was alive (and still working) in itself was remarkable. His generation of artists is that of myth and legend; they’re so iconic, so revered, so entrenched in their own history, that you might think they died long ago. Jasper Johns (born in 1930) is still kicking it, as is Claes Oldenburg (born in 1929). We’ve lost a few of these legends in recent years…and every time we do, the shock isn’t so much that we’ve lost a great, but that they were still around in the first place.”

Oldenburg’s most important creative partner and spouse, Coosje van Bruggen, died in 2009 at the age of 66.

We’re fortunate that we got so much time with Oldenburg. And we’re lucky that such a great number of museums, cities, municipalities, and other entities trusted him and van Bruggen to impart their vision on public spaces. I think we’re all better for it.

At the time that the DMA announced that it was going to remove STAKE HITCH from the barrel vault, I wrote a very angry letter to Jack Lane, objecting to its removal. I knew then, as I still know, that it meant that it would never be returned to its place of prominence in the museum. This is only one of the reasons that I have forever left that museum. Misguided ideas and plain old fashioned stupid thinking.

Thanks for this pitch perfect Oldenburg in Texas eulogic piece.

The Meadows Museum is also blessed with an Oldenburg sculpture on its plaza, “Geometric Mouse, Scale A.” https://meadowsmuseumdallas.org/collections/pages/objects-1/info/?query=sort_Artist%20has%20words%20%22oldenburg%22&sort=9

Jack Lane hated the Stake Hitch and thought were a bunch if hicks. He once called me “provincial”. I was told by another director it is now in poor shape in storage.

I have a double truck photo I the Design District photo book with a piece called “Stakeless In Dallas”. My little protest.

The Stake was fun. I guess we can’t have that!

I miss Stake Hitch and feel strongly it should be restored. Over twenty years ago my son was on a school visit to the DMA and the class was taken to the lower floor and allowed to see the lower point of the stake — it was an important experience for him. //. Judd specifically set up Chinati to protect against removals of this kind. I recently visited Monument to the Last Horse for the nth time — really a monument to iron, nails, and defeat of the Comanche, who had no horseshoes. It is in a place sheltered from whim.

I ran into Oldenburg at his retrospective at the Guggenheim in Fall of 1995 I think. He was standing by one of his huge hamburger pieces. I told him my son really liked his work as did I, and I bought for my son the book of his complete works which my 5 year old son studied diligently. Oldenburg replied, very deadpanly, while holding his hand about 4 feet off the floor: “I make my art for people about this tall.”

I too miss the STAKE HITCH and think it should be restored to the DMA. It is meant for the barrell vault and I always enjoyed bringing my college students to DOMA and having it as one of our discussion points. Sadly gone and for no clearly good reason. They could have taken the ccreative path to work around it, but instead choose the throw it out path that plagues the art world.

Yes, The stake is in storage. Hope it returns…someday?