Olafur Eliasson at the DMA 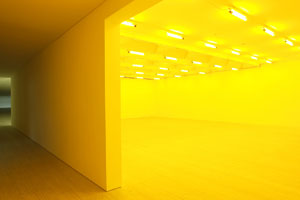 Olafur Eliasson, Room for one colour, 1997...(Image details below)

In a move that offers welcome relief from standard American museum practice, there are no didactic labels cluttering the walls of the Olafur Eliasson show at the Dallas Museum of Art. Apparently this is because of the artist’s deeply held belief in the radical primacy of individual experience. His project’s philosophical underpinnings lead to a concern for undirected attention to what one actually sees (and in some cases smells, hears and feels) when experiencing his artworks. Don’t tell the audience what it is; set up a situation that invites an experience and let events unfold.

It’s clear Eliasson knows a great deal about perception. The survey presents a number of explorations into looking and (didactic labels or no) offers a series of “teachable moments” on the topic of the act of seeing and the interpenetration of one’s consciousness and external events. From the show’s title to the structure of the individual works, I was reminded of Henri Bergson’s philosophical concept of durée, an unfolding metaphysical continuity which always contains differences within it.

In Room for one colour (1997) the artist illuminates a gallery with powerful, so-called “monofrequency” lights – i.e., they emit only one wavelength of the visible spectrum, a harsh yellow. The experience is startling and somewhat consciousness-altering. White surfaces appear yellow. Everything else is gray. Skin, clothing, eyes, hair, shoes, everything washes out, turns to a shadow of what one knows it to be. The space of the room appears oddly altered because of the severely limited color. Perspective still holds true for the lines of the gallery’s structure, of course, but in the absence of color, the conscious experience of depth is limited. 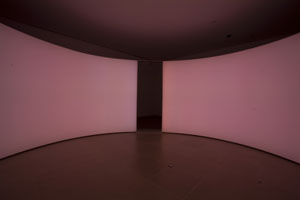 Attention to the phenomenology of color informs a number of the works. In a nearby gallery Eliasson offers 360° room for all colours (2002), a large cylindrical structure in which the colors of the ambient light shift at 30-second intervals, which is about the adjustment period of the average person’s optical apparatus in a color-saturated environment. It’s something of an exploration of our organic abilities to emulate the white balance function of a digital camera.

Outside of inside (2008), an Eliasson installation making its debut in Dallas, continues this theme. Consisting of an array of theatrical lights timed to display a sequence of colored hexagons on the opposite wall, the piece also capitalizes on the viewer’s visual physiology to conjure complementary color afterimages and suggest vaguely three-dimensional atmospheric forms.

Eliasson’s frequent use of theater spotlights in the show throws an old aesthetic dispute into sharp relief and establishes a pedigree. In a 1967 “Artforum” essay, “Art and Objecthood,” Greenbergian apologist Michael Fried condemned much of the (then) emerging Minimalist movement as essentially a “new genre of theater” – which, being neither painting nor sculpture, constituted a categorical error in aesthetic thinking. Minimalism’s theatricality substituted “stage presence” for the self-conscious, rigorous modernism of, e.g., David Smith, and so replaced sculptural quality with bogus ideology. “Art degenerates [!] as it approaches the condition of theater,” Fried wrote then. And now, 40 years later, along comes a major touring exhibition by an internationally acclaimed artist who makes numerous works out of theatrical equipment. The winner in Fried’s tussle with Minimalism is indisputable.

Indeed, it is difficult to imagine work like Eliasson’s even being conceived outside a historical line of development that included Donald Judd, Dan Flavin and the “Light and Space” artists like Robert Irwin and James Turrell. Eliasson’s debt to Turrell in particular is hard to overstate. 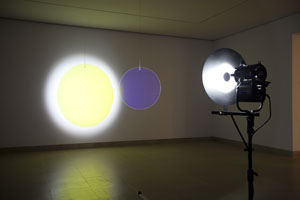 Yellow versus purple, 2003...(Image details below)

The existence of a show like Take Your Time itself proves the cultural viability of an aesthetic far removed from issues of Greenbergian quality. It is a show about personal, individual experience and, in the words of the (didactic) exhibition brochure, “seeing yourself seeing.” There is a satisfying irony in all this when you consider the old, high modernist demand that an art form like sculpture achieve a degree of self-consciousness in its formal expressions. Here, Eliasson demands that sort of self-consciousness from his audience.

At the back of the exhibition, Beauty (1993) comprises a mostly dark room outfitted with a set of water misters and a single spotlight that produces a ragged rainbow in the mist. The piece is surely a conservator’s nightmare. All that moisture in a museum can’t be a good thing. Given the context – a museum exhibition by an artist at pains to show me myself seeing – I just about have to notice that my position relative to the light and the mist is integral to the play of refracted colors before me.

The poetry of the piece comes across naturally but different viewers bring different expectations to an artwork. The times I toured the exhibition, the place was alive with patrons holding tickets for the next time slot for admission to the Tut blockbuster over on the other side of the museum. I wonder how many of us responded to Eliasson’s work in the same way.

That’s Eliasson’s point, of course. It’s all about a plurality of viewpoints and parallel narratives. Judging by the ubiquitous smiles and appreciative comments, most of my fellow patrons really liked the show. The works are engaging, even friendly. Whether much of the general public actually see themselves seeing is another matter.

If any labels had been used, the labels themselves would become the work, and too often this is the case. More should be done to limit their impact on the viewer’s experience in all shows. Thank you, Michael, for your insight, and your well written article.

Hearing Eliasson talk about his work on KERA did nothing to make me appreciate his work. Coming from a culture where you have no peers in the business makes it especially tough to find your own voice as an artist. But I do agree with your point about museum labels, or “cards” as they say in the UK. And you most certainly wrote a good article.