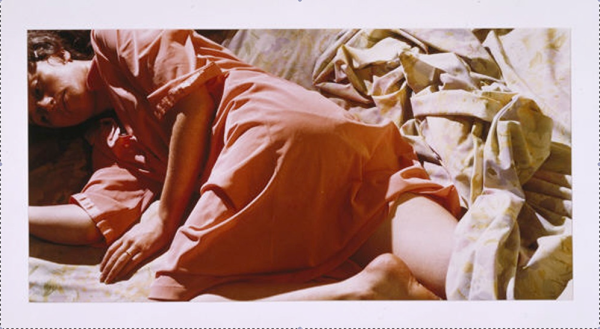 A few nights before I saw the Cindy Sherman retrospective at the Dallas Museum of Art, I dreamed about Cindy. Picture a big warehouse building like Warhol’s New York Factory with lots of fabulous, hip, young-looking male and female Cindy want-a-bes, all dressed in black skinny jeans. Some were draped over a red coach (just like the one Billy Name garbage-picked for Warhol). Some were making art and some just wanted to be near Cindy.  “Oooh Cindy, over here, over here.”  I felt kind of old and out of place. I thought Cindy would be aloof, a demanding primadonna. But as I spoke with her, I found that she was nice and down to earth; she wasn’t interested in all of the celebrity worship.

I am having this dream, because of my internal angst about having to write an insightful, witty, and totally fresh look at Sherman’s work (as per my editor’s directive). According to my editor, what could possibly be said about Sherman’s work that hasn’t already gone into print? Using my best psychobabble voice, I tell myself that this dream represents my deep seated fear about the yearning to be liked. It stems from childhood abandonment issues. What if I pan Sherman’s work and she doesn’t like me? What if I really screw up this review and my editor pans me?

Seeing all of Sherman’s work in one place is quite impressive. Christina Rees told me the other day that it “f…ing” blew her mind.” She also said that Sherman might be as or more important than Bruce Nauman. For sure Sherman is a pivotal artist not only in photographic history, but also within the larger history of contemporary art. She’s one of the few photographers who came to prominence in the 1980’s, who is still relevant today. Whether you love or hate her work, you have to respect her tenacity, dedication and her ability to re-invent herself and her work again and again over the past thirty years.

I admit that I am more than a bit conflicted about some of her work, especially some of the recent series.  I’ve always been partial to the Untitled Film Still series and the Untitled  (Art History Portraits). I haven’t seen the Film Stills in their entirety since MOMA purchased the collection in 1995 and mounted an exhibition in 1997. Seeing them again 16 years later was like visiting an old friend—one who you haven’t kept in touch with, yet when you are together, it is as if time had not passed. Given the monumental scale of most contemporary photography, the Film Stills seemed miniscule in comparison. Yet, this is part of their draw. The work does not rely on scale to lure the viewer. If anything, their intimate size made me want to spend more time looking carefully at each image. 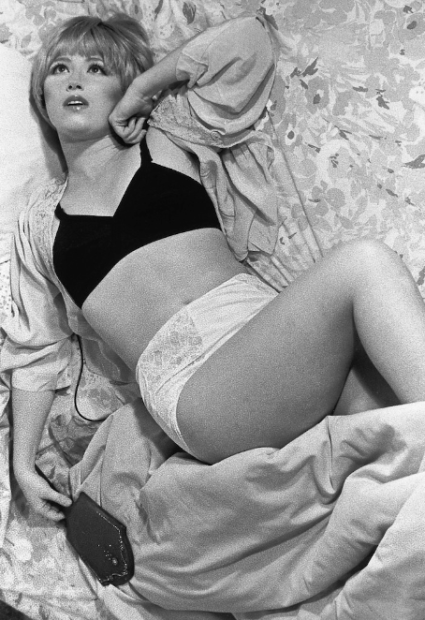 Prior to my visit, I wondered if the Film Stills would still seem relevant today within the context of gender stereotypes. Or would they scream 1980’s POMO like the work of Barbara Kruger and Richard Prince? In Untitled Film Still #6 (1977), the underwear looks dated, but the pose is one that we still see in magazines and films. Although today’s rendition would include a Victoria Secret black push-up bra with a matching lacy thong. Instead of a hand mirror, the model would be holding her IPhone, snapping a pic to post on FB. 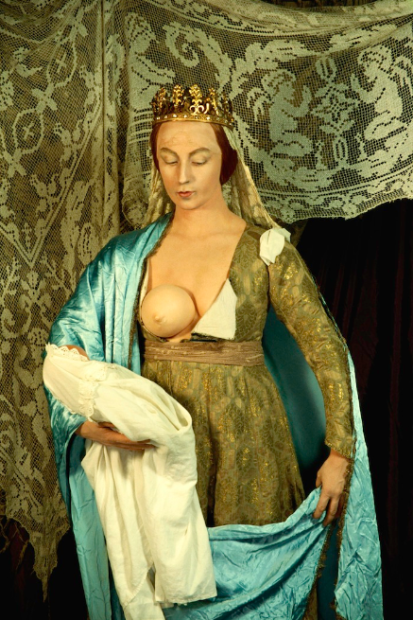 Like her Untitled Film Stills, Sherman’s Untitled (Art History Portraits) still make me smile with their subversive humor. How can one keep a straight face while looking at Untitled #216 (1989), the bare, balloon-shaped, breasted Madonna with plastic child? One of the qualities that I love the most about this work is the elaborate detail in both the costume and set design. Many other photographers have made work inspired by art history, but Sherman was the first to own this genre. Also unlike many of the other photographers (Morimora comes to mind) who try to recreate a specific painting, Sherman’s are more of an inventive composite, rather than a direct replication. 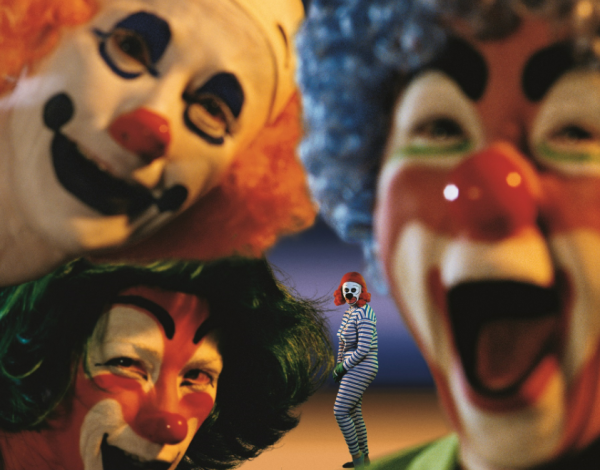 Sherman’s two series that I’m most reticent about are the clown portraits and the society matrons. I can hear my grandmother’s voice in my head saying, “If you can’t say anything nice, then don’t say anything at all.” So I’m abashed to say that I really dislike the clown photographs. It’s not that I hate clowns or have an inherent fear of them. The color photographs screech BAD PHOTOSHOP DESIGN to me. Technically they are fine. But from a design perspective, the swirling rainbow colored backgrounds and composited images distract from the subject’s face. It’s what I imagine a really bad acid trip must be like—one in which you can’t escape. 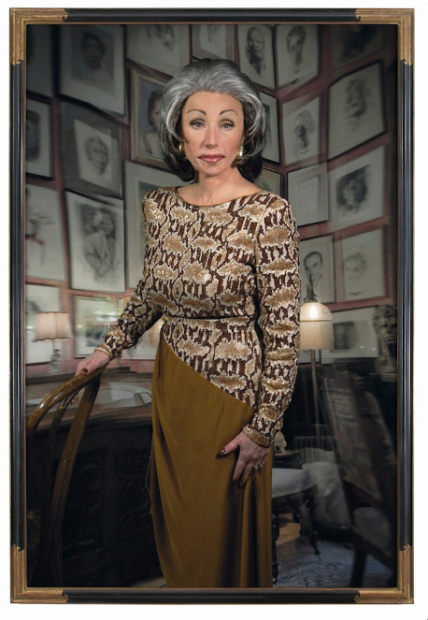 In a more recent series, Sherman created exaggerated caricatures of New York society matrons. Vulgar and garish, the photographs resemble her clown portraits. Whereas the clowns exude a scary undertone, the society matrons seem pathetic. They make me sad and uncomfortable. Sherman rides a fine line here between cultural critique and parody. I can’t decide if she’s crossed the line or if that even matters.  My friend who attended the New York MOMA opening reception said it was interesting to see the real Upper Eastside society matrons in attendance and noted they were not offended in the least by the work. Apparently the parody was lost on them. 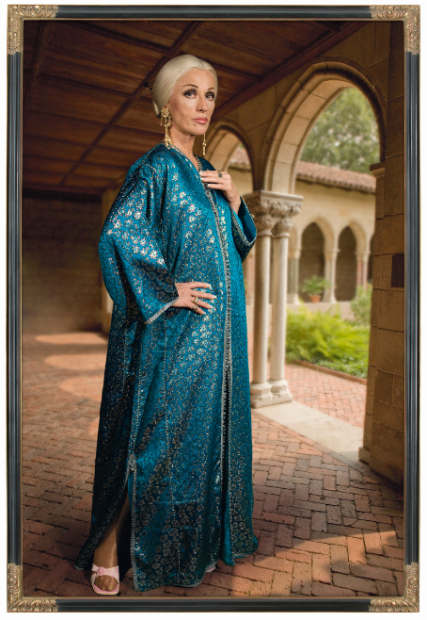 In listening to Sherman speak about the work on Art 21; she stated that she chose the scale, because she had not previously produced anything that large before. She said that male artists make monumental prints, so why shouldn’t she. Although I think that is a lame reason to make a big print, the scale works. Society dismisses older women, even older women with money. Sherman does not allow us to look away. We are confronted with plastic surgery at its worst–a new species of women with immovable faces, who resemble a cross between a really bad drag queen and a psycho-killer clown.

Although I did not discuss all of her work on exhibit, I would be remiss to not mention the two wall murals in the center main gallery. The women in the murals do not belong to the world around them. Their large-scale colored bodies seem in limbo, standing just outside of the black and white fairy tale forest. Although Sherman is in costume, her transformation occurs from digital alterations to her face, rather than make-up or prosthetics. The irony is that the characters seemed less exaggerated and more authentic. The murals remind me of Sherman’s earliest cut out animations from graduate school. These gems are also on display at the DMA. The mural work feels fresh and not yet completely resolved.  Which I hope means that there will be more of this work to follow.

I’m with Christina Rees. This show was incredible.

I also think Sherman’s work resonates more with women than men. (I realize the artist would probably hate that statement.)

@Rainey–it was interesting that my male students weren’t uncomfortable at all with the society matrons. in fact, most of them appreciated the incredible high-res detail in the large prints. both males and females were equally freaked by the clowns and fairy tale series. but that of course is sherman’s goal. she’s been smart to avoid speaking about her work. she always denies the feminist interpretation, but that just keeps folks talking about the images.