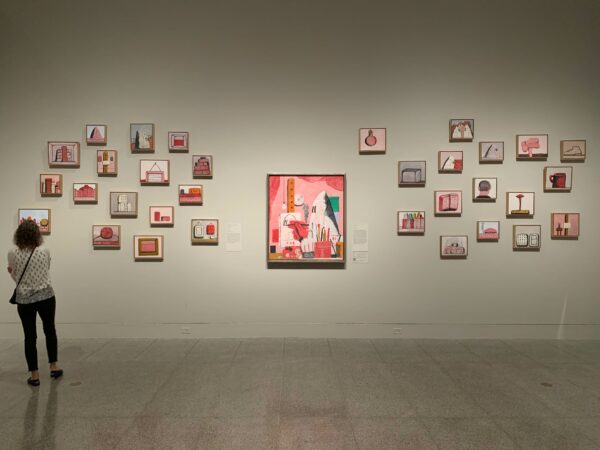 The most perceptive character in a play is the fool, because the man who wishes to seem simple cannot possibly be a simpleton.
-Miguel de Cervantes Saavedra from Don Quixote 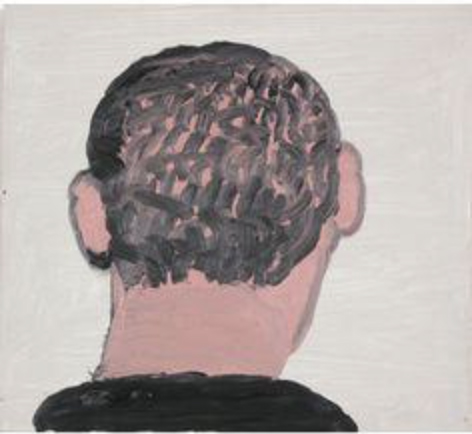 The work of Philip Guston, beloved by so many artists I personally know, myself included, can be a tough sell to the public at large. There are manifold reasons for this and all of them are pretty interesting. Somehow, more than any other painter of the twentieth century, Guston pokes and prods all the right and relevant nerves, in a unique and poignant way. His trajectory, on its face, is that of the wandering hero — his battles sought out in the spirit of creative integrity. I think it’s deeper, though, this ability to expose in the audience something they didn’t realize was latent in themselves. His paintings can unnerve the viewer and initiate them into a new way of looking at art and themselves.

Now, a magnificent retrospective of the artist’s career at the Museum of Fine Arts Houston, is carefully curated with the help of Guston’s daughter, Musa Mayer, and the love and admiration for the work comes through. Now tells the story of one man’s journey into his own labyrinth of personal demons, cultural pariahs, and existential turmoil. If it is catharsis Guston deals in, it may be an acquired taste, but one that’s savory beyond description for those acolytes of his shambolic universe. 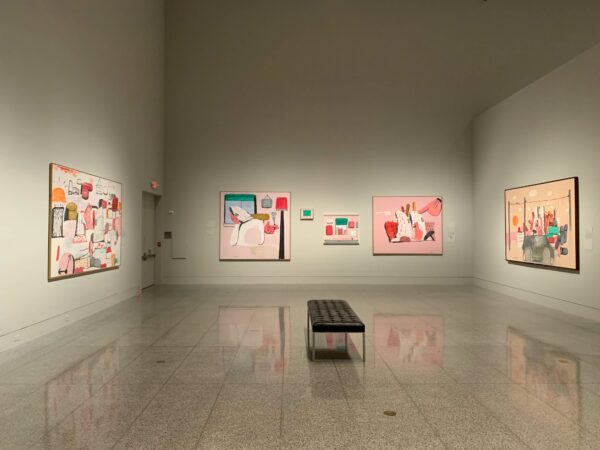 Conventional wisdom has it that Philip Guston is an important figure in the history of modern art due to his capricious nature coupled with his courage to put, with abandon, all his eggs in his very clunky and oddly shaped basket. He is categorized as a painter practicing during the halcyon days of abstract expressionism à la Greenberg, soaring with eagles like de Kooning. Prior to this, Guston was an accomplished and, more importantly, self-taught artist working in a social realist style mixed with hues of Surrealism. After suffering a personal tragedy (the suicide of his father when he was just eleven), Guston excelled at creating urban scenes of youth, contorting with fluid abandon and ripe with personal and political conscience. 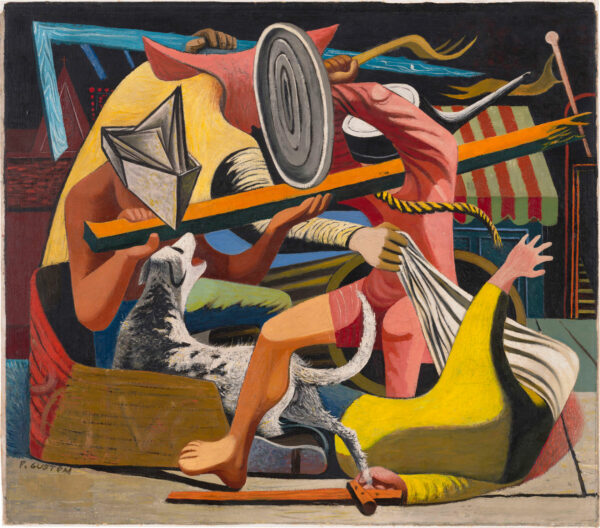 Some of the work from this period on display in the exhibition recalls various masters — I see Ensor and Di Chirico especially, all conveyed with a mood more heartfelt than memetic. It is as though one can sense the internal drive for Guston didn’t merely lie in the desire to become a great painter, although by this time, he certainly was. The work gives insight, rather, into his motivations, understood and parlayed into the language of social realism/figurativism as being a smart fit. He knew that specific visual language was a tool he needed for that particular content. In other words, you can tell he wasn’t looking for a style — he was looking for clarity of expression. The modernist notion of the avant-garde as being paramount to value is not present in Guston’s work at this time. 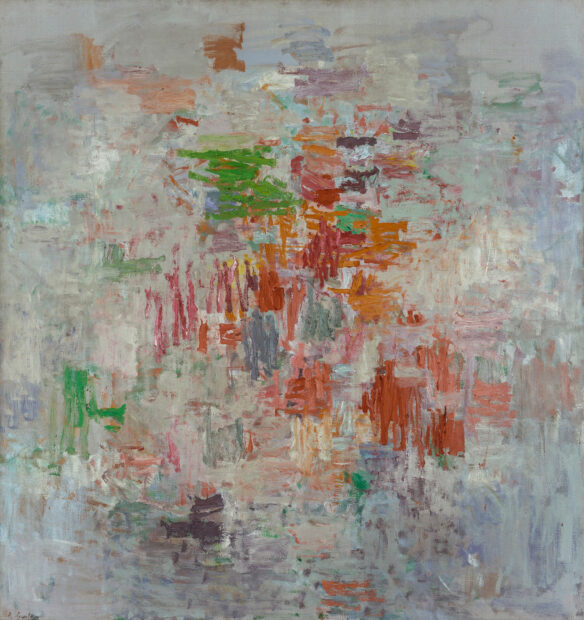 This period evolved into many different phases dealing with various guises of abstraction and depiction, until Guston arrived at his demarcation from any figurative representation or figure/ground relationship at all. Many canvases did not survive the cutting room floor, but several examples of his ‘abstract impressionism’ phase are on display in the show. They are fluid in flesh tones and moments of rhythmic mark-making, all set in impasto lushness. The borders of the paintings are usually left raw, creating a sense of amorphous intervention. You can immediately recognize these paintings; it is evident that this artist had arrived at a unique and relevant voice, and he was celebrated as such at this time in his life. This particular avenue of painting also fit lock and key with the day’s modernist edict of non-objective abstraction as the pinnacle of taste.

Then comes the infamous 1970 Marlborough Gallery exhibition. Seemingly at his zenith, and with one show, Guston became the cat that dragged something untoward into the kitchen. Suddenly and without notice, the artist presents a body of work that retains the painterly sumptuousness of his nonobjective surfaces from just a few years earlier, work that inspired Life magazine to celebrate the artist, yet also digs up the figurative language of his past in a manner that decrees more jester than reverence. All of sudden, here are clunky lines and muted viscera all schlepped up on the canvas, seemingly with no more reverence than a stubbed out cigarette. This new work challenged the art world establishment where it hurt. It must have been shocking to see in person; I would give a lot to have been a fly on the wall during that opening. I wonder how I would have reacted. I’m pretty sure I would have hated them, like all the other critical voices, unable to see the forest for the trees.

But this is only the narrative as it’s been spun. It lets us feel like we understand his career in some sort of chronological fashion, which allows us to take the later work seriously and also lets us claim to marvel at how beautiful it is. That’s off course, and the artist knew it from the get go. Yes, Guston retained a sensibility in his use of paint and color, hard won during his long and searching tenure as an artist, but it would be ridiculous to maintain that his goal was to create beautiful paintings in his later phase. 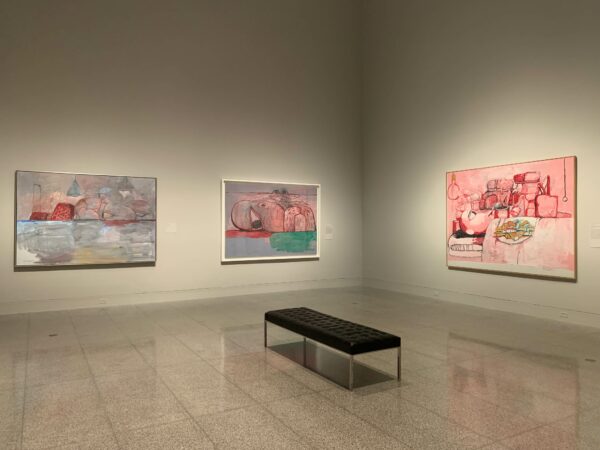 On a very basic level, Guston’s later work can be described as “outsider art.” The term was coined in 1972, but the art brut movement has roots with the French painter Jean Dubuffet from the 1940s. Yet, there is at least a very un-naive and intentional placement of visual obstacles, signs, and symbols that in and of themselves can be viewed as ominous, nefarious even, and the manner in which they’re delivered is full of import. This is the key, as I understand it, to unlocking what is going on in Guston’s transformation as a practitioner of high-art to a “stumblebum,” as he was derisively referred to at the time. If you deny the stumblebumness of Guston, as can so often happen when art professionals speak of this work, if you stand in front of one of those clunkers from his later years and try to describe it in terms anything like sublime, you are sorely missing the point. 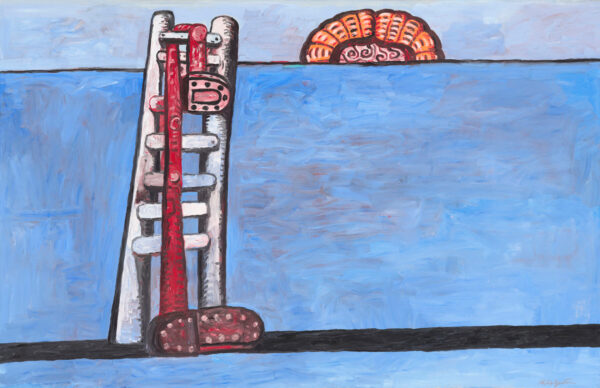 Plenty of contemporary artists work in styles that are meant to challenge our notions of beauty. It is commonplace now. Not so much then. While this is important, what’s more crucial is the fact that Guston chose to use loaded symbols in a naïve manner because he was gunning for results only specific juxtaposition could yield. It is at that junction that the work exceeds where so many others fail. By way of contrast, let’s imagine the work of Cy Twombly, whose paintings can be exceedingly cryptic and whose paint application can be described as scribbly, child-like, whatever. Birds of a feather? I think not. It is inconceivable that a whisky bottle, or a boot, or any whiff of banality at all could show up on Twombly’s surface — he never leaves the realm of the cerebral, no matter how loose or immediate his mark-making. Guston, by allowing for the inclusion of the banality into the language of his paintings, avoids this pitfall. To achieve this, he had to leave the realm of high modernism. He knew the best place he had to mine was his own life, rife with turmoil, both generational and personal. So much has been written about his Jewish heritage, his ancestors’ fleeing pogroms, his father’s suicide, his penchant for personal vices. I would argue all of this is always present in all of his work, from the early figurative murals to his nonobjective phase, but most clearly in his later years.

What I get from Guston is a clear voice describing humanity itself. We are creatures that have evolved into a head space that is capable of reason and introspection, with absolutely no idea of why we are what we are. If modern art was once heralded as a surrogate for anachronistic religion, Guston’s trajectory through that ruse was about as cutting edge as can be imagined. Clear away the poppycock and we are left with an existence too often defined in terms of conflict. Klansmen (or any other boogeymen) are stand-ins for all of us, as Guston knows. In The Studio, from 1968, the artist paints himself as a Klansman, sitting in front of an easel, painting a Klansman. This is his way of suggesting, “Hey, this is you, too. These paintings are your life, too.” I never once felt even close to that looking at Twombly. 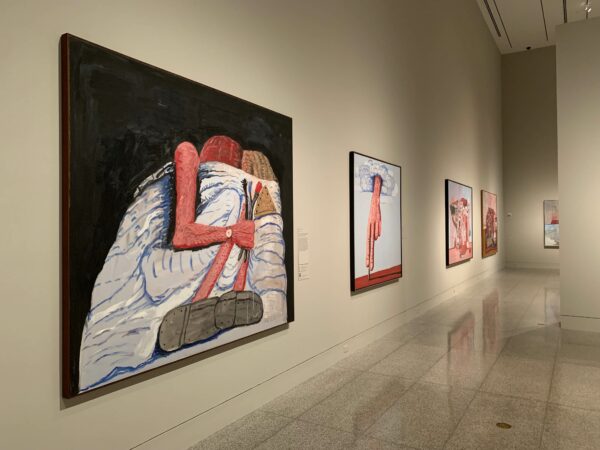 As mentioned above, Guston’s trade is catharsis. I think other artists know this instinctively when they look at his work. It is hard to make a good painting, and it’s even harder to know what the hell to paint in the first place. Somehow Guston figured out both and touched a nerve that continues to vibrate. Now displays beautifully just how powerful his strategy turned out to be. So much of what I like to think of as Guston’s mature work is, indeed, not beautiful, but it sure isn’t ugly either. It’s a mirror held up so that America of the twentieth century could get a good gander at all its blemishes. It’s a personal love letter from the artist that says, “I went looking for real value in my art and this is what I found,” full stop. In that, it is priceless.

Philip Guston Now is on view at the Museum of Fine Arts, Houston until Jan 16th, 2023.

It has been almost 20 years since I saw Philip Guston Retrospective at the Modern Museum of Fort Worth. I admit it was a challenge for someone fresh out of art history grad school. The exhibition was curated by Michael Auping to trace the arc of Guston’s career from untrained outsider to the darling of Abstract Expressionism to the final revelation of Guston’s controversial, lavishly painted internal demons. The recent waffling by major museums to exhibit his late work reveals how raw and relevant Guston’s was and is. My initial confused reaction has taught me how deep below the surface art can connect to the reality of who and what we are as humans.

I knew nothing of him. I was “blown away”!
The scope and depth of his perception and interpretations makes him a Must-See, in my opinion.
..someone I wish I knew personally..

I tackled the Boston show that left more questions than answers https://martinmugar.blogspot.com/2023/01/guston-at-mfa-boston.html