“The Obama Portraits Tour” at the The Museum of Fine Arts, Houston

by Melissa L. Mednicov May 27, 2022
FacebookTwitterEmail 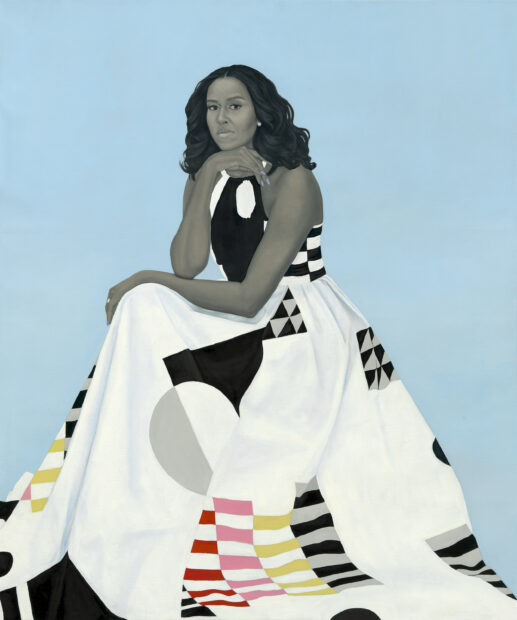 The Obama Portraits Tour at The Museum of Fine Arts, Houston features two portraits: Kehinde Wiley’s Barack Obama (2018) and Amy Sherald’s Michelle LeVaughn Robinson Obama (2018). The works commemorate President Barack Obama and First Lady Michelle Obama, the first Black President and First Lady of the United States, and were commissioned by the National Portrait Gallery* to mark the Presidency of Barack Obama. The Obamas selected their portraitists, two figurative painters, who are now the two most widely recognized Black figurative painters today — both within and beyond art spaces — due to this commission.

The portraits are among the most celebrated portraits of a President and First Lady, and, I believe, the most well-known portraits in contemporary memory. As the press materials and exhibition organizers repeat in the exhibition video, the organizers view the tour as a way to bring the portraits to those who can’t make it to Washington, D.C. What is (somewhat) unsaid in those videos is the hunger to see these portraits, and to spend time with these figures since they left the White House. Both artists use the trademarks of their artistic practice to depict the Obamas, and the portraits contain multitudes of familiarity. Anyone who knows Wiley or Sherald’s work would immediately recognize their paintings; and there’s no mistaking the presence of each subject.

Perhaps I lucked out in my timing, but I was able to have some long stretches alone in the mezzanine with the portraits. The works themselves are gorgeous, and each artist made a portrait that exemplifies and utilizes the hallmarks of their artistic practice. Kehinde Wiley’s Barack Obama, like most Wiley works, features an intricate and meaningful background and foregrounds a Black, powerful figure. Typical in Wiley’s work is a Black revision of canonical art history, a discipline long rooted in white displays of power.

Here, Wiley shows modern power in Obama’s gaze, the strength and casualness of his pose, and the details such as the Federal Revival chair (the show’s organizers cite the chair as “a symbol of American democracy,” which they link to the United States’ independence and “President Obama’s milestone achievement as the first African American president”). The background of flora notes Obama’s formative places: African blue lilies for his Kenyan father and family, white jasmine roots his birth and childhood in Hawai’i, and chrysanthemums mark the official flower of Chicago, the birthplace of Obama’s political career. Wiley’s use of symbols is decoded nearby in the gallery space.

The foliage overtakes the background and, in a few details, almost bursts forth beyond the figure. A bright light shines onto Obama, particularly illuminating his face and hands. A great painterly detail, more visible in person than in photo reproduction, is how light bounces in the work. The foliage creates a green reflective light on his shiny (and fashionable) shoes and the creases of his jacket. He leans forward, as if he sees you and is perhaps listening to you. 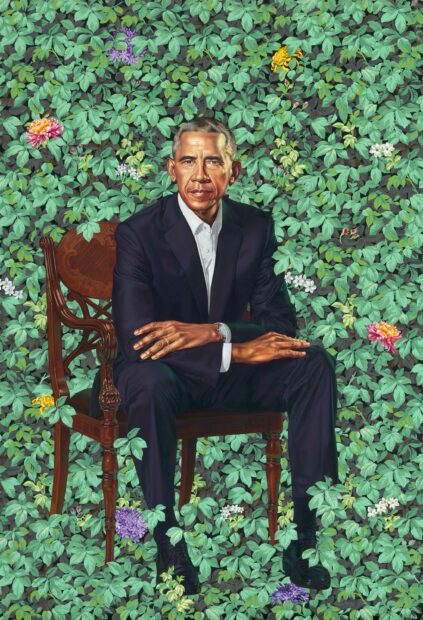 Amy Sherald’s Michelle LeVaughn Robinson Obama is equally iconic. Michelle Obama acts as a stabilizing compositional force in a pyramidal formation. Her dress references her attention to fashion and how she often uses fashion to convey meaning. For instance, the MFAH cites Gee’s Bend quilts as one reference point for the abstract pattern (and artist Piet Mondrian is another). Typical of Sherald, the painting features cool tones and greyscale for skin tones. Similar to her husband’s portrait, Michelle Obama conveys elegance and strength through her straightforward gaze. She looks out to the viewer, thoughtfully trying to see and understand us. Against a stunning light blue background, Michelle Obama holds our gaze.

The portraits command their gallery at the MFAH; two large paintings with space to linger, look, and wait in front of them. There are no other works in the exhibition — the space is crafted to focus your attention on the two works. Near the museum exit are two facsimiles from the portraits for photo opportunities (hashtags are encouraged): Wiley’s background and Sherald’s detail of First Lady Obama’s dress pattern. People enjoyed their time posing in front of the photo wall, a way of picturing themselves in the works.

The time I spent with the portraits was one of the more extraordinary moments I’ve spent watching others in an art space. I am not sure I have ever seen people so happy in an exhibit before (and I’m an art historian!). People of every age (starting with a few months-old babies) and from a diverse presenting range of backgrounds — everyone was excited to be in the museum with these paintings. A newborn baby was held by their parents in the gap between the portraits for a family photograph; the child will remember this experience only through documentation (and obviously was not born when President Obama was in the White House).

There were many photographs being taken; everyone wanted a picture of themselves in front of each portrait. However, peoples’ engagement was different than similar encounters I’ve witnessed of instantly recognizable and crowd-gathering artworks (Mona Lisa, Starry Night, Frida Kahlo’s self-portraits). With these, viewers tend to look through their screens while capturing the work with a camera, which becomes an intercessor between them and the paintings. They take their quick photo, maybe a selfie too, then move on. At the MFAH, however, what I saw were photographs, selfies, and such, but most people also stayed, lingering, and looking at each portrait. Many people were also intently reading the didactic information and watching the video (more than the usual handful at most exhibitions).

Both Wiley and Sherald work from photographs of their subjects. Their photograph originates each portrait, and the viewers’ photographs at the MFAH (the selfie, the museum family snapshot) somehow completes one experiential cycle of the work. Most viewers will only ever know either Obama through photographs or interviews; now they have their own encounter, their own photograph of being “with” the Obamas.

In the exhibition space, there was a clear excitement to see these portraits, beyond any art historical interest. I can only conjecture about the evident joy I saw in the gallery — a joy likely wrapped in longing and/or nostalgia, a return to a time before now. Additionally present, among the pride and celebration of the first Black President and First Lady of the United States of America, was a country with a historical and contemporary record of racial violence and injustice. The museum visitors I saw wanted to be within the portraits and with the portraits, spending time in their presence and looking closely at them.

This was a wonderful review. I wish I was in Houston so I could experience the portraits!

I was there yesterday and the author is 100% correct. People were both reverent and just really happy to bask in their presence. It is well worth a visit to experience that shared experience alone, but the paintings are spectacular.