Vital film document, Come Back, Africa screens at the MFAH.

“This film was made secretly in order to portray the true conditions of life in South Africa today. There are no professional actors in this drama of the fate of a man and his country.” So begins Lionel Rogosin’s fascinating 1959 film, Come Back, Africa. A new, restored film print makes its way to Houston, showing at the Museum of Fine Arts Houston, March 3, 4, & 9.

After his Oscar-nominated first film, On The Bowery, American filmmaker Lionel Rogosin spent a year in South Africa making a film that would open eyes around the world to both the teeming culture and intolerable conditions of that country under the rule of apartheid. Whenever the authorities noticed him, he told them he was making a travelogue to promote tourism or a musical film about the “happy natives.” In fact, under constant danger, he was observing the political system of oppression, documenting everyday life, and working with anti-apartheid Africans to fashion a story true to the black South African’s experience. 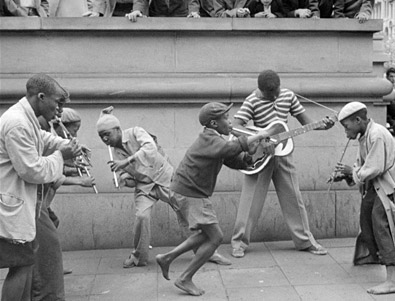 With great black and white photography and a soundtrack mixing the flutes of street musicians with the clangs of industry, Come Back, Africa is a captivating experience and an invaluable time capsule taking the viewer to the bustling streets of Johannesburg, down into the gold mines near the city, and to the black township of Sophiatown (which was being evacuated and torn down by the government even at the time of filming.) The story­ is about a young man, Zachariah (played by Zachariah Mgabi, a day laborer that Rogosin met waiting for a bus) who is mistreated by his bosses, hassled by the law, and troubled by the violent nature of life in the impoverished black community. 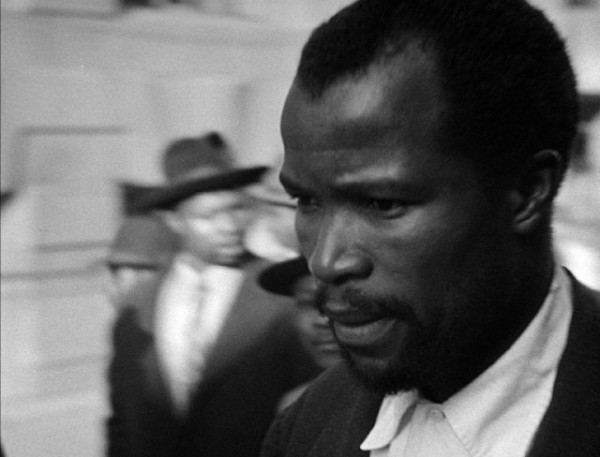 Come Back, Africa is not strictly a documentary by conventional standards, but it serves as an important film document of that place, time, and situation. I love this kind of hybrid film, although they’re often a little confusing to audiences and critics. (Charlie Ahearn’s 1983 film Wild Style about the burgeoning hip hop culture in New York comes to mind as an example.) A film that combines documentary-style location shooting with a fictional story performed by authentic yet unskilled actors is tough to judge within the usual confines of either documentary or narrative film. Or rather, it’s tough not to judge. But at their best– and this film is the shining example­– they can convey an authenticity that few straight documentaries or slick narratives are able to achieve. 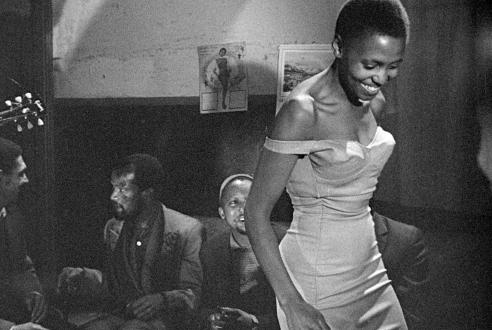 It’s worth pointing out the presence of an amazing, young, and then unknown singer in the film. Miriam Makeba’s appearance in Come Back, Africa made an impression on international audiences and it began her rapid rise to world fame. She attended the premiere at the Venice Film Festival, where the film won the Italian Critics’ Award. Soon Makeba had signed with RCA Records and in the years to come, she had great success with such songs as “Pata Pata” and “The Click Song”, she met and performed for John F. Kennedy, she testified against apartheid before the United Nations (for which her South African citizenship was revoked), and she became the first African to win a Grammy. Although exiled from her home country for most of her life, Makeba remained dedicated to bringing its music and the plight of its black population to the world, earning the title, “Mama Africa.” I should be clear that the film does not star Makeba. Her appearance is brief. But her intimate musical performances are really outstanding and frame an important part of the film. And it’s this film that widened the reach of the singer and activist’s voice.

The chance to see Come Back, Africa on celluloid is a rare one, and I really urge you to go. I’ve included the trailer for the film below, as well as a couple of other interesting bits here for some context.

A brief clip of Hendrik Verwoerd, Prime Minister of South Africa 1958-66, and architect of the apartheid system of racial separation and repression. He explains…

Singer Miriam Makeba’s version of “Beware Verwoerd (Naants’ Indod’Emnyama)”, one of the first South African freedom songs, masking a powerful message in gentle music. (Here are the Black People. Beware, Verwoerd!) The composer of this song, Vuyisile Mini, was arrested and hanged by the South African government in 1964.

I super love this movie (Although I haven’t seen it yet)! I grew up listening to Mariam Makeba and her one time husband Hugh Masekela. His son went to school with my older brother. All this to say that I’m glad this movie exists and I might just make a trip down to H-town to go check it out. The Verite mannerism of it (again, jusf from the preview) recalls Louis Malle and Pontecorvo’s Battle of Algiers. Flippin’ sweet!
-Blay

Blay- Yes, Louis Malle’s films of that period and Battle of Algiers aren’t bad comparisons for the photographic style. Come see it! And also, if you haven’t, you might want to check out a documentary called Amandla about the role of music in the struggle against apartheid- both Makeba and Masekela are in it. That’s on dvd and I think available on Netflix.

Thanks for the recommendation. I just saw the preview and will check it out.