The Museum of Fine Arts, Houston Acquires a Rediscovered Painting by Diego Rivera

The Museum of Fine Arts, Houston (MFAH) recently announced its acquisition of a painting by Mexican muralist Diego Rivera. La Bordadora (The Embroiderer) was acquired by a New Orleans businessman shortly after it was completed in 1928, and has remained in their private collection since that time. 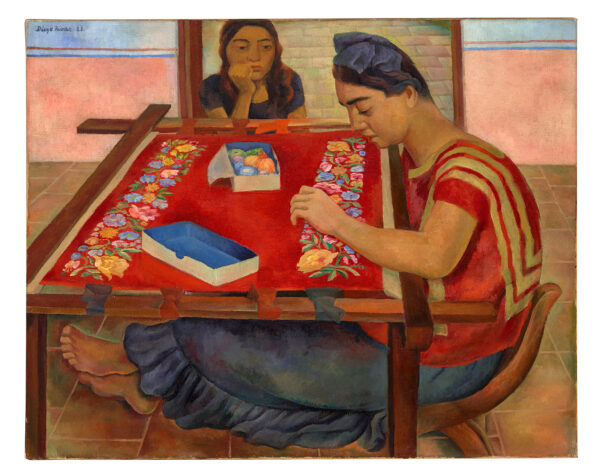 The painting likely stems from Mr. Rivera’s 1923 trip to the Tehuantepec region near Oaxaca, Mexico. During this time the artist became enamored with the region’s Indigenous culture and created drawings and paintings that featured the people and traditions of the area.

In the press release announcing the acquisition, Gary Tinterow, the Director, Margaret Alkek Williams Chair, of the MFAH commented, “La Bordadora relates thematically and stylistically to a beautiful Rivera cartoon already in the MFAH collection, from his iconic mural cycle at the Ministry of Education in Mexico City. Both La Bordadora and the ministry murals herald a fundamental theme of Rivera’s life’s work, to capture the dignity of the everyday.”

He continued, “With this acquisition, we will be able to build on the foundations of our extraordinary holdings of 20th-century Latin American art to tell the story of modernism from its earliest chapters.”

In 2001, the MFAH established a department dedicated to Latin American Art and an associated research institute, the International Center for the Arts of the Americas (ICAA). The department’s focus has been to grow the collection of modern and contemporary art made by artists working in Latin America, and by Latino artists working in the United States. The MFAH originally began acquiring works made by Latino artists as early as the 1930s. Currently, the museum has more than 2,000 works of Latin American art.

Prior to this acquisition, the MFAH’s collection numbered eight works by Mr. Rivera, including four drawings, three lithographs, and a photograph. As the first painting by the artist to enter the museum’s collection, La Bordadora provides a fuller representation of the variety of mediums Mr. Rivera explored in his artistic practice.

The painting, which the museum acquired directly for $4 million from a Christie’s auction held earlier this month, is now the third-highest selling work by Rivera at auction. Though a photograph of the painting was published in Art Vivant (a Paris journal) in 1930, its location was unknown until recently. The work has not previously been displayed publicly, but the MFAH plans to exhibit the work in the coming months. It will only be on view for a short time in Houston, however, as it is scheduled to be included in the exhibition Diego Rivera’s America at the San Francisco Museum of Modern Art in July 2022.