Life Out Of Balance, Writ Large – Koyaanisqatsi Tonight at the MFAH

I want to call attention to one film in the Cinema Arts Fest that, while nestled quietly and rather buzzless in the schedule between exciting premieres, audiovisual performances, and parties, is a truly amazing work of grand cinematic spectacle, and one of the festival’s rare opportunities. 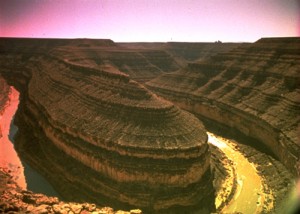 The 1982 film Koyaanisqatsi, showing tonight at 7:30 the Museum of Fine Arts Houston, is a stunning portrait of our planet. With no specific story, characters or dialogue, it’s an epic and completely arresting visual concert, and a meditation on humankind and its larger natural home. Not since Carl Sagan and his pals assembled the Voyager messages for potential cosmic neighbors had we recorded our own existence in such a wide scope. And not since the city symphony films of Walter Ruttmann and Dziga Vertov in the 1920s had the documentary film form been so invigorated by photographic and structural experimentation.

Cinematographer Ron Fricke beautifully captures a variety of natural and man-made wonders on various scales and in various locations, and continually explores and manipulates time and rhythm through time-lapse and slow motion techniques. The musical score by Phillip Glass drives the film- intermittently (and at times simultaneously) hypnotizing and awakening. 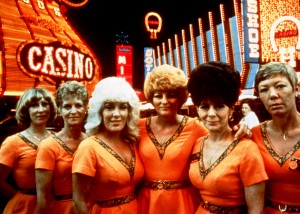 The film’s title- the Hopi term for “life out of balance”- and its frequent juxtaposition of nature and human industry nudge a message of mankind’s damage to its planet and the need for our change in behavior. But I, like most who share my love of the film, see it less as the Inconvenient Truth of its time and more simply as a window into the complex movements, harmonies and tensions that make up this big, ol’ world. A really cool window.

The film’s director, Godfrey Reggio, will be in attendance for this special screening. His story is an interesting one- he was a monk, an educator, and a community organizer before setting out to direct this and other films. It will be neat to hear him talk a bit about the project he began 30 years ago and to see a clip from his new collaboration with Philip Glass before the film. But I’m not recommending this screening because he will be there. I am recommending it because they’ll be showing a gorgeous, brand spanking new 35mm print of the film on the big screen. This is not only the best possible way to see this film, but tonight may be your one and only chance to ever see the film in the best possible way- big and beautiful.

I’m seeing now that Joe Leydon also posted about the film over on Culture Map. Good! His original ’82 review for the Houston Post also encouraged to “just go with the flow.”

I, too, remembered the film as worth seeing on the big screen and brought my kids. Thirty years later, it’s a satisfying collection of fairly expectable filmic devices (who doesn’t want to see a buildings dynamited in slow motion?) Things sped up and slowed down, tracking shots from helicopters,and multiple exposures are all neat tricks, like a really amibitious student project. It’s Glass’s score that make parts of it transcendent.

And people smoked a lot in the late 70’s.