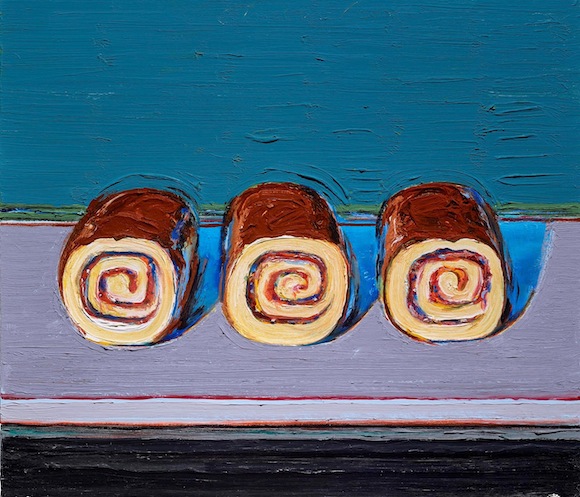 Two Centuries of American Still-Life Painting: The Frank and Michelle Hevrdejs Collection opened this weekend at the Museum of Fine Arts, Houston (MFAH) and a couple of evenings before, the museum hosted a patron’s dinner to celebrate the exhibition. It was at this event when life trustee Frank Hevrdejs announced that he has pledged the entire contents of the show to the MFAH, reports the Houston Chronicle.

The majority of the works on view have never before been seen by the public. The exhibition features 67 paintings by 60 artists dating from the early 19th century to the present, including Georgia O’Keeffe, James Peale, John F. Peto, Wayne Thiebaud (above), Max Weber, and Andrew Wyeth.

The Chronicle quotes MFAH director Gary Tinterow as following the announcement by saying, “You’ve spoiled us by serving dessert before dinner.”

I viewed the exhibit today, since I’m in Houston. It’s a large and very impressive exhibit. The late 19th century American and modern/contemporary paintings are especially strong. It’s a great gift for the MFA-H.