Dispatches from Spain, Part Two: How Cuenca, Spain is Like Marfa, Texas

Ed Note: In fall 2021, Michelle Kraft taught art history for a semester in Spain to a group of university students from Texas. In this series of three articles, “Dispatches from Spain,” she reflects upon her time there. Read Part One here. 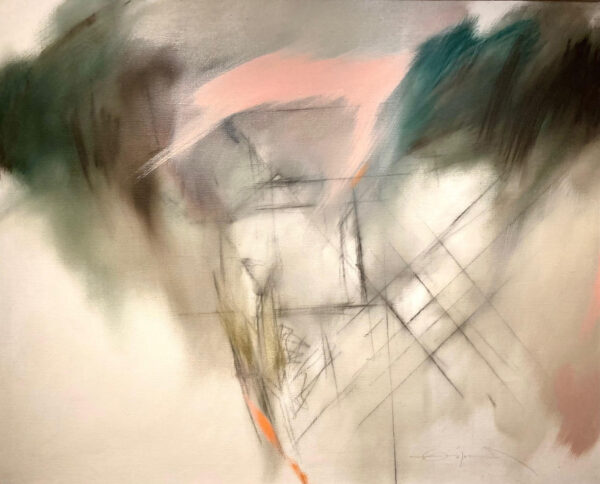 When one journeys to Cuenca, Spain, it is most likely by fast-train — the Madrid to Valencia line — which deposits the traveler, in a scant hour, at Fernando Zóbel station. Zóbel, the important Spanish Filipino painter, is to Cuenca what Donald Judd is to Marfa: both artists are the padre-fundador of an important contemporary art museum in an out-of-the-way town that’s probably still scratching its head, wondering how it curried such favor.

Whereas Marfa claims less than two-thousand inhabitants and was founded in 1880 as a railroad water stop, Cuenca is a small city of fewer than fifty-five thousand, established by the Moors in the early eighth century, and there were Roman settlements in the area before that. Traveling from Madrid to Cuenca, one crosses the central Meseta Plateau, with vast treeless stretches of dry grass; Marfa’s location, in the Chihuahuan Desert, offers a similar panorama on approach. The ancient city center of Cuenca, though, lies upon a precipice flanked by two dramatic gorges — one for each the Júcar and Huécar Rivers. Marfa, itself flat, is ringed by the distant Davis, Chisos, and Chinati Mountain ranges. For Cuenca and Marfa alike, it is geography — each has a distinctive placeness — which served as the kernel to propagate an art center.

Cuenca’s dramatic topography, in the fifteenth century, led to a unique form of domestic architecture: the casas colgadas, or “hanging houses.” Once common along the eastern cliffs of the old center, only a few of these casas remain. In 1961, the city, under the direction of municipal architect Francisco León Meler, commenced the final stages of restoration to some of these historic hanging houses. At the same time, the painter Fernando Zóbel, having amassed his own sizable collection of contemporary art, was seeking an appropriate location to house it. He learned of Cuenca’s casas colgadas from a friend he’d met at the 1962 Venice Biennale, Gustavo Torner. Within a year, Zóbel had written to the city council of Cuenca, offering his collection for display in the newly renovated hanging houses; and in 1964, the city agreed to establish the Museo de Arte Abstracto Español. 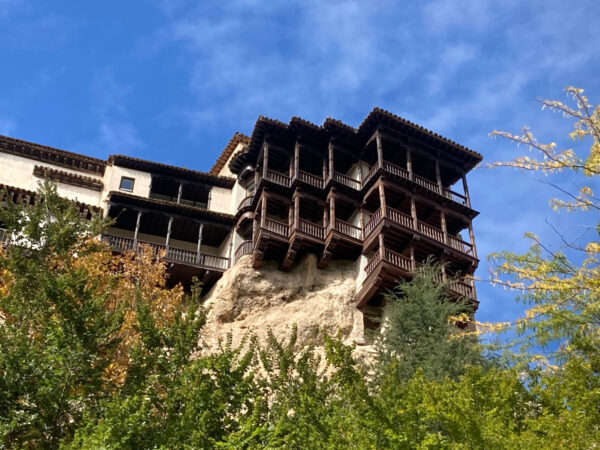 The museum was officially inaugurated on June 30, 1966, with an exhibition of over two hundred fifty abstract mid-century artworks, representing eighty-seven Spanish artists. This permanent collection included paintings by Zóbel himself, as well as works by other Spanish heavy-hitters, like Eduardo Chillida, Antonio Saura, Pablo Serrano, and Antoni Tàpies. In the early 1980s, the museum joined forces with the Fundación Juan March; and Fernando Zóbel endowed his collection to the foundation in 1981, three years before his death. Since then, the Fundación has expanded the museum’s physical space, funded temporary exhibitions, increased the museum’s library and archives, implemented education and outreach initiatives, published works associated with the museum’s artists and exhibitions, and overseen conservation and restoration of holdings. 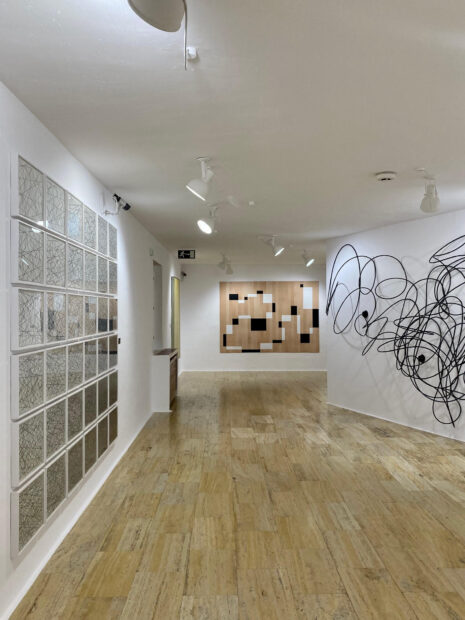 To visit the Museo de Arte Abstracto Español is to enroll in a survey course of late Spanish Modernism. There is a heavy emphasis on Abstract-expressionism and color field painting — Fernando Zóbel was himself influenced by Mark Rothko; the-grid-as-subject-matter abounds. The pristine white galleries are likewise not unexpected for such a museum. Except, that is, for the pleasing incongruity caused by the occasional presence of a wooden beam or two, telling the visitor that this modern art museum is inserted into the hull of an ancient villa. Unlike Donald Judd’s Chinati Foundation, in which the landscape, art, and exhibition spaces were imagined and actualized as a harmonious entity — like triplets born together, fitted to one another as a singular unit — in Cuenca, the art collection preceded the museum in birth. But the two did grow up together. The viewer alternately forgets, and then is reminded, of the museum’s unique hanging-house origins. At times, this reminder comes in the form of a startling-but-satisfying fusion of artwork to gallery to topography, as in the way the tectonic sculptures by Jorge Oteiza and Eduardo Chillida echo the geological weirdness of the opposing gorge. Here, the gallery’s relative emptiness is a gentler version of the vertigo-inducing abyss outside the windows. The result is a heightened appreciation of both the artwork and the landscape over which this casa-museum is hanging: the three — art, exhibition space, and geography — coalesce. 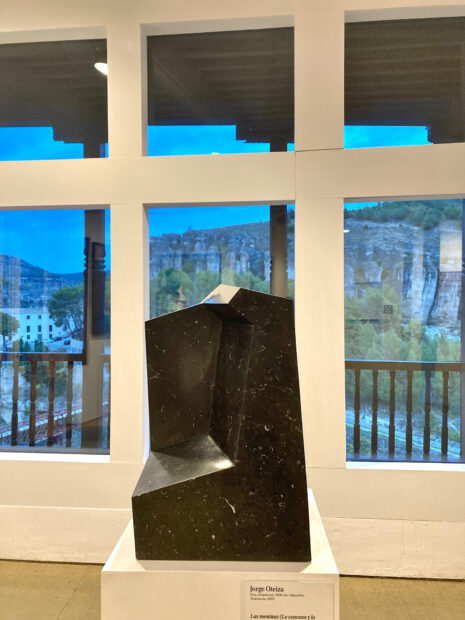 As in Marfa, following Judd’s establishing the Chinati Foundation, Zóbel’s vision of big-art-in-a-small-city caught on: other modern and contemporary exhibition spaces soon followed. The Fundación Antonio Pérez, housed in a former seventeenth-century Carmelite convent, is also dedicated to late Spanish Modernism and contemporary art. Pérez, a poet and artist whose oeuvre includes the objeto encontrado — or found object — had accumulated, since boyhood, an eccentric collection of ephemera, ranging from signage to bed springs to African sculptures. Peres used some of these objetos to create works like his several tributes to Velazquez’s Las Meninas, crafted from materials like aluminum cans and candy wrappers; his mash-ups of license plates that could serve as companion pieces for John Chamberlain’s crushed cars; and his Homage to Claes Oldenburg, made from oozy piles of colorful electrical cable. 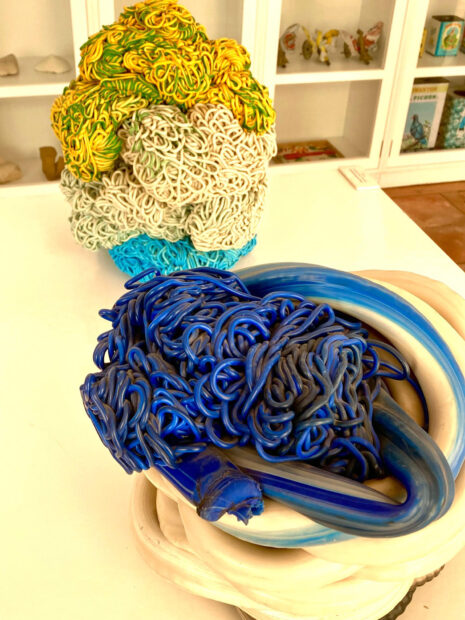 Some of these found objects, though, have been amassed simply for the apparent joy brought about by mere possession. These unmanipulated objetos encontrados are decontextualized by their removal from any reference to original function, reminiscent of Picasso’s own found-object constructions or his appropriation of African masks for Cubist paintings. Thus, Pérez’s objetos encontrados are scattered amongst the museum’s paintings, sculptures, and installations, in a meeting of high/low material culture. All are (re)presented on the same plane, there is no hierarchy of display to differentiate between them. Recontextualized thus, the found objects are, as the museum puts it, “in continual dialogue with the rest of the works of the permanent collection.” It is a permanent collection that includes works by Isabel Munoz, Equipo Crónica, Olga Sinclair, Andy Warhol, Lucebert, and Pérez’s own close friends Antonio Saura and Manolo Millares, among others. 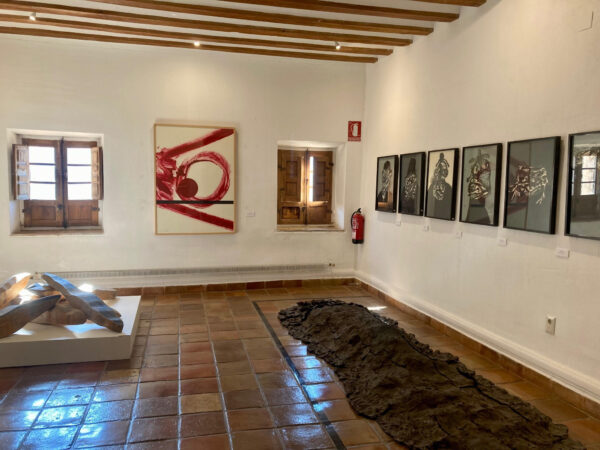 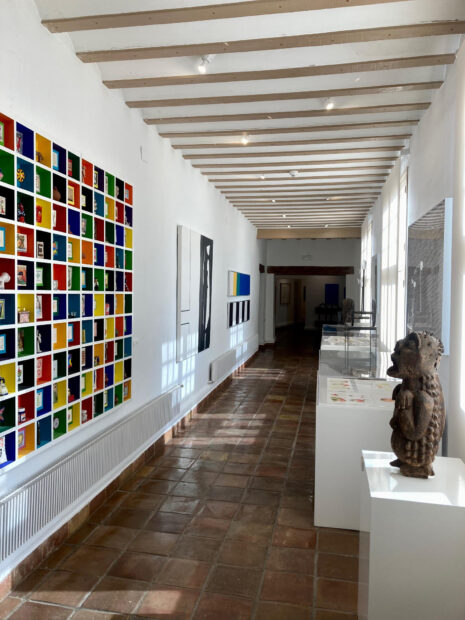 Just downhill from the Fundación Antonio Pérez is the Colección Roberto Polo. Opened in December 2020, the Cuenca location is in the former Medieval church of Santa Cruz. It is one of two spaces (the other is in Toledo) which houses the Cuban-American financier’s personal collection of art, on long-term loan to the regional government of Castilla-La Mancha. This agreeably bite-sized museum packs a punch, with works by “classic” artists, like Delacroix, Degas, and Rossetti; and Modernists like Gerrit Rietveld, Theo van Doesburg, and Picasso. But among these are also works by contemporary European artists, including René Stoeltie, Maria Roosen, Karel Dierickx, and Wladimir Moszowski.

Like Marfa, Cuenca’s status as an international art mecca was seeded by a singular artistic personality and vision — in fact, Cuenca predates Marfa in this regard. In both places, the vision has flourished, spreading beyond a sole site and into the town’s very fabric. In both places, the role of art has not been without controversy. In a place like Spain, where the Guggenheim Bilbao has loomed large, some have tried — without success — to clone such a feat for their own municipalities. Such defeat can result in sour grapes: When the Roberto Polo Collection opened, some felt that Cuenca already enjoyed an advantaged position as visitor-magnet. What good would one more art museum do there? Meanwhile, in Marfa, long-standing residents are being squeezed out by increasing real estate prices and property tax valuations brought on by an influx of art-and-culture-seeking retirees and vacation-home owners from bigger cities.

What is paradoxical is that with Marfa and Cuenca both, it is difficult to imagine how they should have become the international art centers that they are; it is likewise impossible to imagine them as not that. For both locations, the town, the very landscape, and the art are interwoven; this is perhaps just as it should be. As Donald Judd once wrote, “A bad location doesn’t ruin a good work, but it tends to reduce understanding to information; you know it’s good, but you can’t stand standing there long enough to find out why.”