Dispatches from Spain, Part One: Ávila: Art History in a “Strange, tragic place”

Ed Note: In fall 2021, Michelle Kraft taught art history for a semester in Spain to a group of university students from Texas. In this series of three articles, “Dispatches from Spain,”  she reflects upon her time there.

At the west end of the Plazuela de Pedro Dávila, within the old walled city of Ávila, Spain, a plaque marks the 16th century building where Orson Welles lived while filming Chimes at Midnight (1965). Even before that — he traveled to Ávila in his younger years — the location had made an impression on the actor/director/screenwriter. When asked, during a 1960 interview with the Canadian Broadcasting Corporation, where he’d most like to live, he declared without pausing, “I’d like to live in Spain better than anywhere else in the world … Ávila.” Welles then added, “Horrible climate. Too hot in the summer, too cold in the winter.” (He might well have been describing the Panhandle of Texas.) He then concludes his description of Ávila: “Very strange, tragic place. I don’t know why I’ve got a great thing about it.”

Ávila, which is situated about an hour-and-a-half northwest of Madrid, has been my home for a year, albeit spread across four separate semesters, in three-month increments. Among other university duties, I teach an undergraduate course in art history, where the old city itself serves as a classroom. For a survey of art history in Spain, Ávila just about has it all; and much of what it doesn’t, the rest of the country does.

Long before the Roman Empire claimed the Iberian Peninsula, a Celt-Iberian culture, the pastoralist Vettones, settled the region. Their verracos — immense granite statues of bulls and pigs — are scattered throughout Ávila’s walled city and found in archeological sites within the province. The fine metalworks of these Late Bronze-/Iron-Age peoples, as well as their pottery, are housed in the Museo Provincial de Ávila. At the archeological site of Ulaca, in Ávila Province, is the tragic altar where it is believed the Vettones — similar in practice to their Lusitanian allies — offered human sacrifices.

The city of Ávila is best-known for its murallas, or Medieval walls, to which it — in large part — owes its designation as a UNESCO World-Heritage Site. The ramparts’ mile-and-a-half circumference is dotted by eighty-eight towers and includes nine gates. Beginning at the end of the 1000s, construction on the walls continued into the fourteenth century. Some of its stones are grave markers salvaged from what was once a nearby Roman cemetery. Still visible in these blocks are troughs and channels into which the Romans once poured wine and oil, libations to their dead. Mudejar elements — design motifs rooted in the time when Spain was a land of Islam — are also found within the fortification’s brickwork and crenellations. These walls read as a synopsis of the epochs and cultures that have inhabited Spain’s Meseta Central.

Ávila’s storied murallas have also been the site of strange and tragic events. In the town’s Plaza of San Miguel stands a statue of Ximena Blázquez, the mayor’s wife who protected Ávila from Moorish attack in the twelfth century. According to the legend, while the town’s men were out conquering elsewhere, Muslim forces advanced upon Ávila’s walls. Blázquez rallied the town’s women, dressed as men, to the ramparts with torches. When the invaders saw that the city was indeed heavily protected by what they believed were soldiers, they abandoned their plan, and the area altogether. In the Middle Ages, too, the Puerta de la Malaventura, or Gate of Misfortune, on the southwestern side of the walls, was the exit through which sixty ill-fated knights were marched out as hostages. They were ultimately boiled in oil by Alfonso the Battler. This Gate of Misfortune is likewise believed to be the one through which the city’s Jewish population was expelled, later, during Spain’s Reconquest. 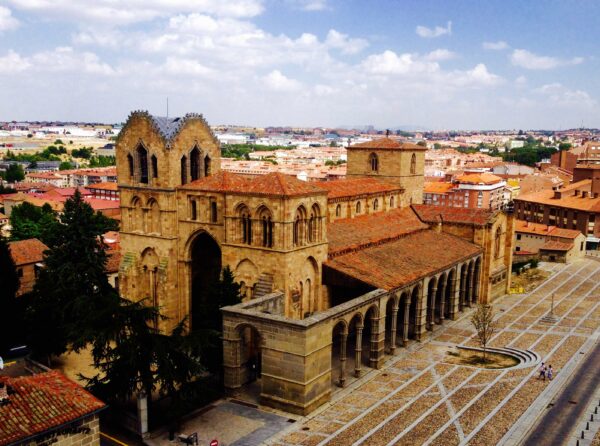 Ávila, too, is a city of churches, mostly Romanesque, though there is a fine Baroque example dedicated to the hometown saint, Teresa. As a Medieval (and present-day) pilgrimage stop, one of the most imposing of these churches is the Basilica of San Vicente. This example of Romanesque architecture — one of Spain’s finest — stands just outside the walls, upon the site of the erstwhile Roman cemetery. The basilica is dedicated to the siblings Vicente, Sabina, and Cristeta, martyred for their Christian beliefs during the reign of Rome’s Emperor Diocletian. The edifice marks the spot where, according to lore, the young saints were crushed to death beneath a great rock. Near the altar of the basilica sits an immense Medieval wood cenotaph, styled as a sepulcher; its carved relief panels, painted in jewel-like polychrome, tell the story of the martyred youths. 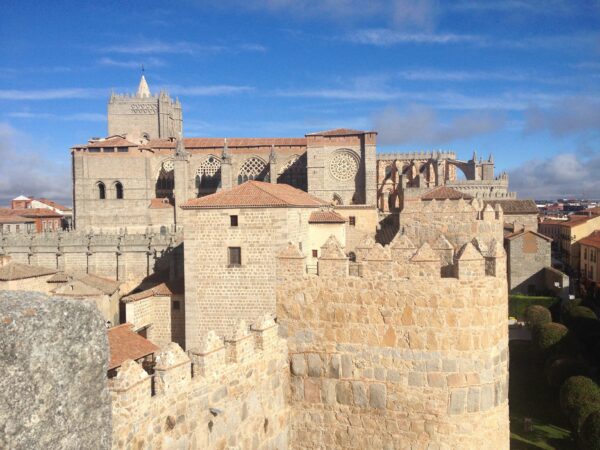 Avila Cathedral as seen from the walls

Not far from San Vicente is Ávila’s cathedral, San Salvador, which sits not just within the walled city but literally inside the walls themselves: its rounded apse juts through the fortifications, appearing like a fancier version of the neighboring turrets. The Ávila Cathedral is the earliest in Spain to incorporate Gothic elements from neighboring France. (The final example of Gothic architecture, before it yielded to the Renaissance, is also nearby, in the town of Segovia.) Begun in the twelfth century in the Romanesque style under Master Fruchel, the cathedral’s construction continued after his death in the French Gothic style. Among the church’s most striking features is its use of “Blood Stone” — so called for its high iron-oxide content, resulting in a rosy hue — for the apse masonry. The cathedral also displays a fine, enormous retablo painted by Italian- and Flemish-influenced Pedro Berruguete, as well as excellent carved reliefs by Vasco de la Zarza. Its museum holds works by El Greco, Ribera, and Luis de Morales. Also, entombed within the cathedral is Adolfo Suárez, Spain’s first democratically-elected premier (after the death of the dictator Francisco Franco), a native of Ávila.

Aside from the rich content that the site of Ávila affords, what is most enjoyable about teaching there is watching art history — well, history and the world, really — unfold for nineteen- and twenty-year-old students. Rather than studying art history from a textbook, we are in it, walking through it together. Facts that had once been mere abstractions suddenly snap into concrete focus as students recognize that they are in the places, seeing the things, and moving in the spaces where events actually took place — events that they had heretofore known only in a classroom. The “realness” of it now changes everything as they begin to see themselves as global citizens, invested in the currents of history, culture, religion, and politics.

And they take what they know with them, they generalize what they have learned to other places, and they are excited to share their newfound knowledge. They messaged me during their free weekend travels with video from inside Mallorca’s cathedral, images of the Sagrada Familia, their impressions of the expansiveness of Rome’s Pantheon. This fall, one student’s father came to Ávila to visit her, and she took him to see the cathedral, providing him a guided tour. “I told him how the rounded arches were Romanesque, but the pointed ones were Gothic, built later,” she related to me after her dad had returned to Madrid. Then she added, “He asked me, ‘How do you know all of this?’” Her smile, as she told me this, was shy, conspiratorial, but also something else: self-assured. She owned what she had learned; and knowledge is to be shared with others, after all.

It is perhaps because of our circumstance as a “school” of fish-out-of-water that I am allowed these glimpses of student-thought; in Spain, anyway, it occurs with greater frequency than it does on-campus, back at home in Texas. Our learning in Ávila is relational, it extends beyond the classroom and into the world-at-large. By the time we leave at the end of the semester, we, too — like Orson Welles — have “got a great thing about” Ávila. Unlike him, though, we know perfectly well why.

This exceptional essay gets to the heart of why the humanities are transformational in education. Students become “global citizens invested in the currents of history.” And those are the citizens who become leaders of their communities, their states and their country—because they saw that art and architecture are manifestations of human activity making a difference in the world.

Thank you so much, Judith–as you can guess, I wholeheartedly agree. It is through the transformative experiences of travel–and all that that entails, including becoming comfortable with being uncomfortable, and witnessing the expansive contribution of the arts and humanities WITHIN a long historical framework–that I’ve most often witnessed students’ compartmentalized learning coalesce. It’s a huge ground-shift to be uprooted and planted elsewhere for a time–connections are made. I appreciate your comments!