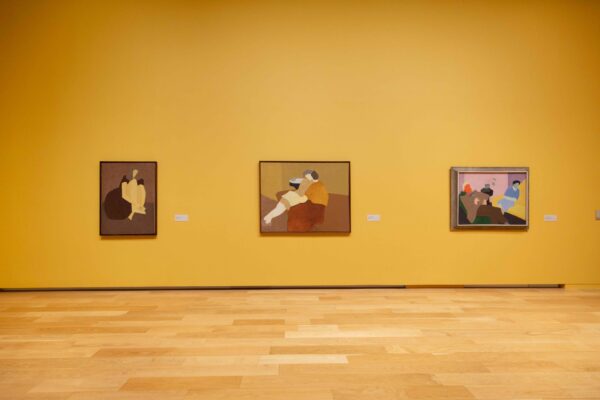 I was surprised to see the announcement about the Milton Avery exhibition at the Modern Art Museum of Fort Worth. While the museum has a commitment to collecting and showing work from the 1940s to the present, most of its major retrospectives over the past years have focused on contemporary artists. Coinciding with the museum’s fifty-year overview of Milton’s work is an exhibition of Sally Michel Avery and March Avery at the Jody Klotz Fine Art Gallery in Abilene. While much has been written about Milton’s work, I was unfamiliar with that of his wife and daughter. In researching their work, I became aware of what has been termed the “Avery style”. 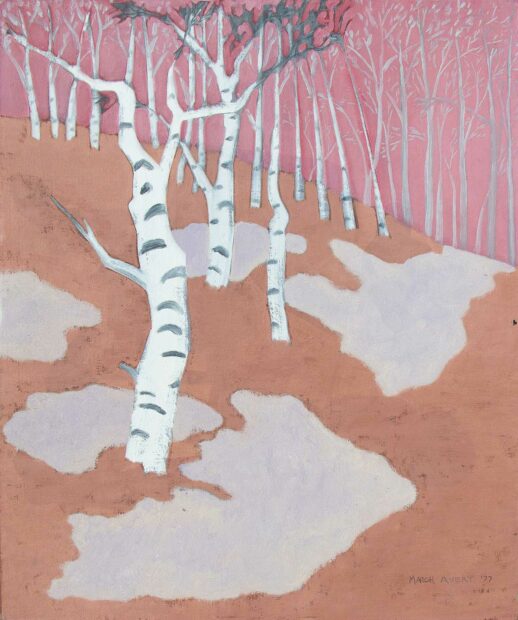 It’s important to note that for forty years, Milton and Sally shared a studio in the small living room of their Manhattan apartment. From the time they married in 1926, Sally supported them with commercial illustration jobs so that Milton could paint full time. During the summers, the family — including their daughter March, who was born in 1932, spent the summers traveling and painting together. Milton was a very prolific artist, sometimes finishing a painting a day. Sally’s work flourished during the summertime months. It was after Milton’s death in 1965 that Sally began to promote and exhibit her own work.

The signature formal elements of the Avery style include innovative use of color, simplified forms, and a flattened pictorial plane in the compositions. Technically, their process included working from sketches made on site, as well as a thinning of oil paint to create broad areas of color on the canvas. The thin paint also allowed for layered translucency in their works. 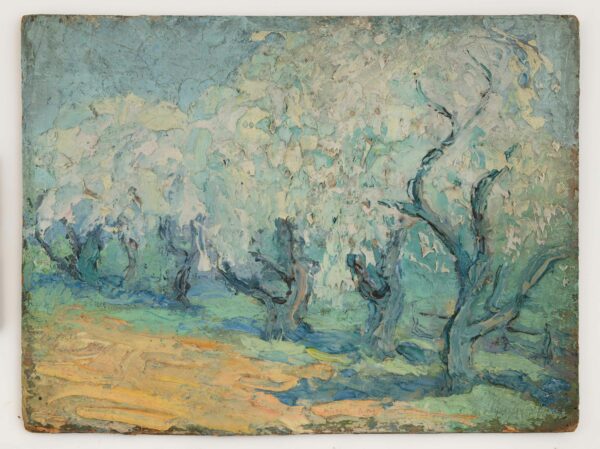 Milton’s early work shows the influence of European and American Impressionism. The painting Blossoming (1918) features a heavy application of paint with large, textured brush strokes, and a pastel palette. It wasn’t until a couple of decades later that he came into his own confident style. What made him unique was his refusal to conform to the “ism” of the times; while his younger male peers embraced Abstract Expressionism, he stayed true to his style. And still, as he explored his own style, his color palette continued to shift throughout the years. 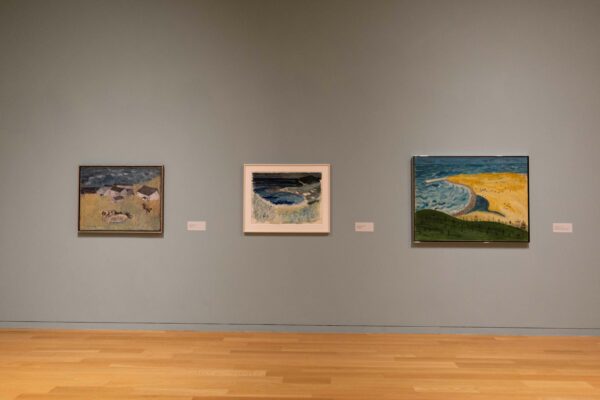 An example of Milton’s evolution from sketch to final painting is on display with Fox River Village (1938) and Little Fox River (1942). Drawn from a hilltop/aerial view, the sketch from 1938 has muted blue and green tones, depicting a stormy day at the beach. In the final oil painting, the viewpoint has shifted to a more dynamic composition: simple lines delineate the trees in the foreground and the movement of the waves, and the entire picture is executed in a vivid teal, green, and yellow palette. 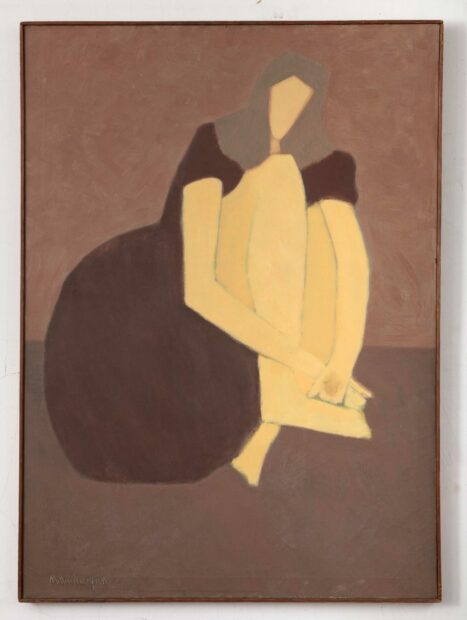 The 1940s and 1950s showed a shift of color, form, and compositional depth in Milton’s work. In Husband and Wife (1945) and March in Brown (1954), the pictorial plane is flattened and comprised of simplified, figurative forms filled with blocks of color. His non-traditional use of color serves to provide the essence of the moment, rather than the depiction of the subject. In Husband and Wife, Milton’s orange face and Sally’s green face together evoke a tense domestic situation. In March in Brown, the female figure’s body language is restrained, yet she remains a large presence within the frame. 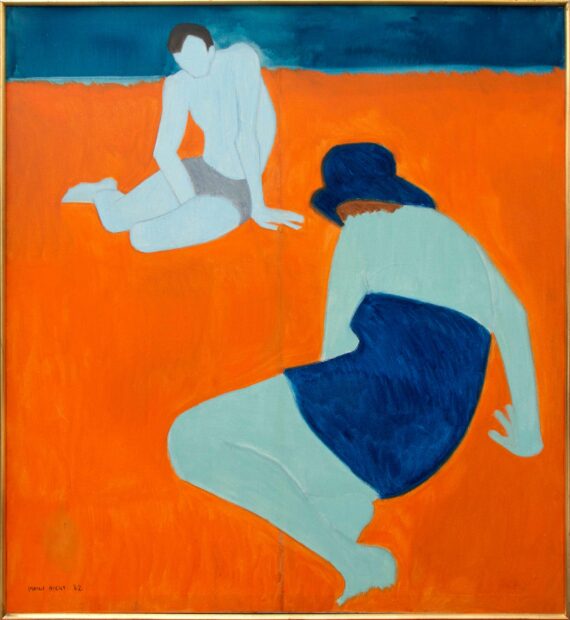 Two later works by Sally and March employ similar uses of color and composition. March’s work, Orange Sand (1962), features two figures seated on the sand facing each other. The background (the sand) is bright orange, while the figures are painted in outline using shades of blue and green. Although the figures are in close proximity to one another, there is an emotional distance between them, which is in part expressed through their wary, tentative body language. Sally’s Untitled Ibex, (1970) is a painting of three ibex against a bright orange background. Sally painted the ibex with blocks of color — purple and yellow, respectively, and added the most detail to their horns. The flattened pictorial plane is also on display here. 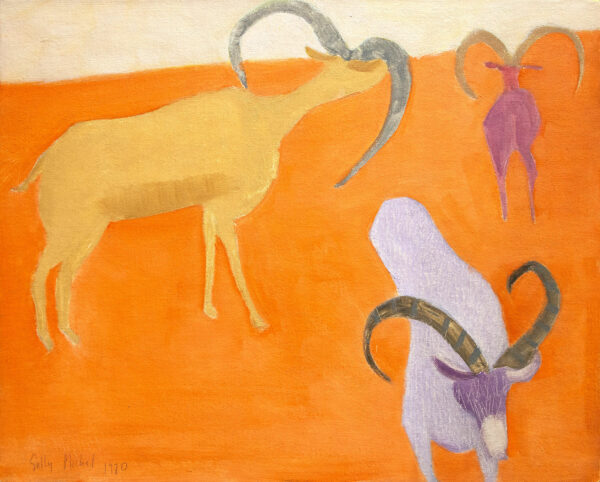 A poetic and lyrical work of Sally’s is Five Birches (1977). Created twelve years after Milton’s death, this painting shows the confident evolution of Sally’s style. Using the signature Avery flattened spatial plane, the color palette is singular, with a cotton candy pink landscape. The middle ground contains layered swatches of green, yellow and orange, with scratched textural lines. Simple, organic lines form the birch trees. March painted the same subject in her work Spring Birches (1977). Her style is also uniquely her own; although she uses the same cotton candy pink background, there is more depth and detail in the branches. It is reminiscent of a whimsical forest from a childhood story. 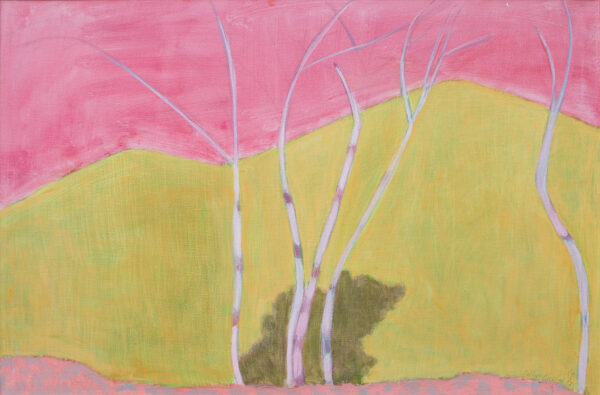 Much has been written about Milton Avery’s influence on Abstract Expressionism and his friendships with Mark Rothko, Barnett Newman and Adolph Gottlieb. While Milton remained true to his compositional style, I found it interesting that some of his last works moved completely into the abstract realm. Perhaps this is due to Rothko spending a few summers with the Avery family towards the end of Milton’s life, and their influence on one another. Boathouse by the Sea (1959) shows Milton’s departure from a recognizable subject into pure color experimentation. Although the work is oil on canvas, the paint is applied in thin washes, revealing the canvas underneath. 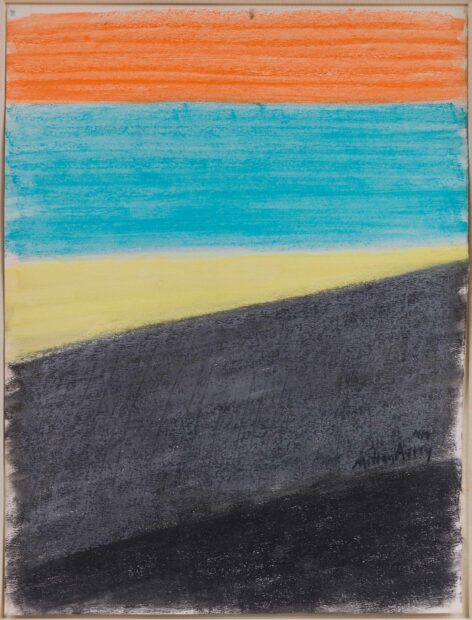 While most critics credit Milton with the Avery style, it is evident from their work that Milton, Sally, and March influenced one another. They were each other’s models, fans and critics. While Milton was said to be a quiet and reserved man, the family communicated through their art, and art was the primary focus of their lives.

The Modern’s Milton Avery exhibit offers much to explore. There are so many interesting works, and my favorites were not available for reproduction. The beautifully printed catalog has an excellent essay by curator Edith Devaney of the Royal Academy of Arts in London. The Jody Klotz exhibition is worth a trip to Abilene. The show’s catalog is available on the gallery website, but it’s difficult to get a sense of scale without viewing the works in person.

Milton Avery is on view at The Modern Art Museum of Fort Worth through January 30, 2022. Avery: A Family Legacy is on view at Jody Klotz Fine Art in Abilene through Winter 2022.

The Modern Art Museum of Fort Worth Grows...