Fleshing Out the Canon: “Women Painting Women” at the Modern Art Museum of Fort Worth 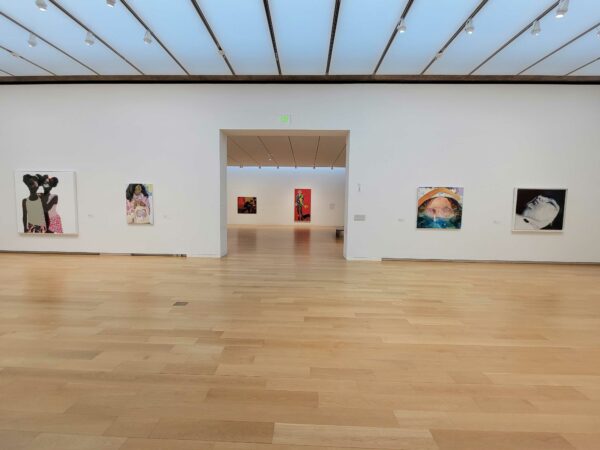 Installation view of “Women Painting Women,” on view at the Modern Art Museum of Fort Worth

Fifty years ago, Linda Nochlin asked a deceptively simple question: Why have there been no great women artists? While the question is straightforward, the answer is quite complex. A variety of barriers prevented women artists from being heralded in the canon of art history. In the ensuing decades since Nochlin’s revolutionary essay, museums and scholars endeavored to flesh out a fuller picture of art history that acknowledges that talents of women, particularly in the years following the #MeToo Movement. Yet, there remains a great gender imbalance in the painting collections of major institutions.

Women Painting Women, on view at the Modern Art Museum of Fort Worth, celebrates the artistic investigations of women who feature women in paint.  Many women artists have found great acclaim in the areas of photography and performance art, but painting, a medium that has historically reigned supreme in the artistic hierarchy, remains a realm where women have yet to receive full recognition. This exhibition initiates a new conversation about the achievements of women painters from the 1960s to the present day.

Women Painting Women is organized around five categories: Color as Portrait, Selfhood, Nature Personified, The Body, and An Open Gaze. While these themes provide a starting point for viewing the works, curator Andrea Karnes acknowledges that such broad themes result in artworks that defy the boxes in which they’re put. With artists from around the globe, of multiple generations, and working across seven decades, the overlapping interests and contrasting perspectives provide a rich examination of womanhood in art. 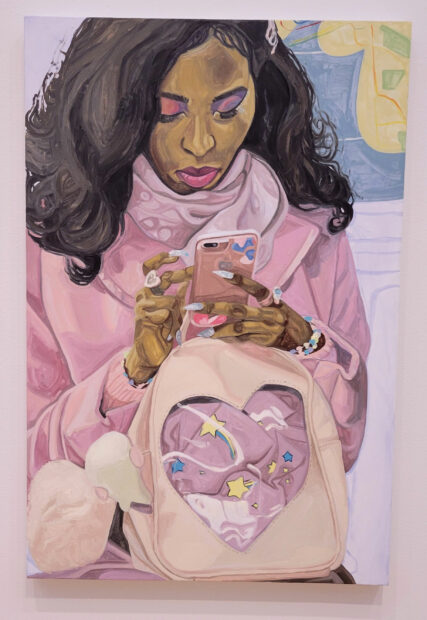 Jordan Casteel, the youngest artist in this show, represents a new generation’s entry into the conversation. Pretty in Pink is a tightly cropped portrait of a young Black woman riding public transit. While the viewer’s proximity to the woman, due to the tight composition, suggests intimacy, the woman’s lack of direct engagement with the viewers maintains her distance. Her eyes stare downward towards the phone in her hand and her loosely curled hair falls over the right side of her face, providing a slight shield. Her layers of clothing — a scarf and closed jacket, in addition to the backpack resting on her lap — further close the woman off to visual consumption. Her body is not on display; instead, we are permitted a passing glimpse of her daily life.

The painting’s title, Pretty in Pink, refers to the woman’s outfit, including accessories, all coordinating in a soft pink. In the United States, pink is strongly associated with the feminine, so Casteel’s depiction of a Black woman in this hyper-feminine color provides a striking counter to the history of the representation of Black women. With stereotypical representations swinging from masculine to excessively sexualized, Black women have long fought to be viewed as fully individualized people. The respectability politics of the late 19th and early 20th centuries sought to correct these racist tropes, however, these efforts again limited women to the containers of idealized middle class heteronormative femininity set by Black men.

Many artists depicting provocative representations of Black life have asserted the right of Black men and women to exist outside of the ideal. However, Casteel’s painting of this woman operates in a subtle middle ground. One of the most striking elements of the work is the woman’s long, sharply pointed nails positioned at the center of the composition, encircling her phone. While this manicure is now a common style, it is important to acknowledge the long history of nail art in African American communities. Highly ornate and exaggeratedly-long nails were a tool for self-expression for many Black women during the twentieth century. Yet, these styles were often associated with lower-class, urban Blackness because of their lack of conformity to traditional Anglo-Protestant beauty standards. Casteel’s portrait elevates a young, urban Black woman self-stylized in a sweetly feminine and modest manner, who is occupying a space associated with the lower and middle classes. The class binary is dismantled, allowing this woman to be viewed as an individual rather than a class or racial type. 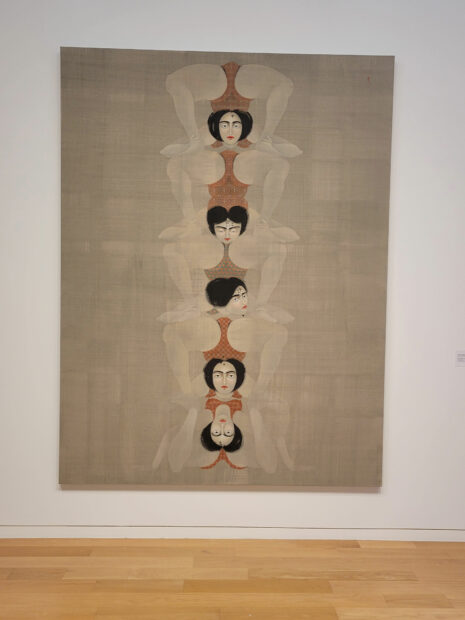 A push and pull tension with labels and the limits placed around acceptable expressions of womanhood is much of what drives this exhibition. Many of the included works examine and attempt to redefine the terms in which women’s bodies are viewed and discussed. As much as this exhibition is about how women artists see women, it is also a direct confrontation of how women have been viewed and portrayed by male artists historically.

Hayv Kahraman’s The Tower engages directly with the Orientalist genre of art popularized by artists depicting people from North Africa and the Middle East during European colonization. One of the more troubling aspects of this genre was the depiction of women, who were routinely sexualized and objectified for male consumption. The women composing Kahraman’s tower retain a strong element of sensuality, wearing form-fitting leotards that leave much of their bodies exposed during their acrobatic contortions. Their private areas form a strong vertical down the center of the composition, offering a stack of female bodies to the viewer. Dark pubic hair, escaping from the cover of the women’s leotards, only serves to accentuate this area more.

While Kahraman’s painting shows the beauty and sensuality of these women, this is not the focus. The women’s faces have a striking lack of emotion and their stares are quite empty, and overall they read as apathetic participants in an entertaining display of flexibility and strength. I personally found this extremely compelling. Often when employing a feminist lens, we focus on how women and their bodies have been exploited. It is worth considering how women, like these characters, exerted agency when possible and played the system, finding ways to use their sensuality to survive and enhance their standing in a highly inequitable system. Viewers are meant to appreciate how these women were objectified historically, but still maintained a strength that supported generations of women. 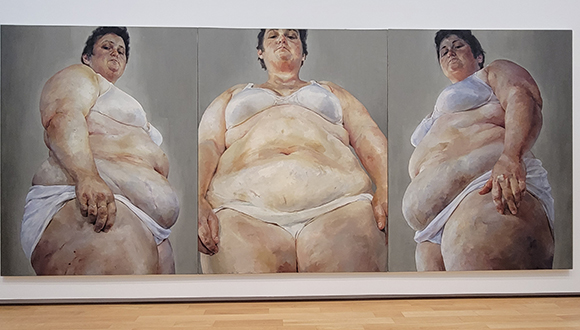 Jenny Saville’s triptych Strategy (North Face, Front Face, South Face) illustrates that unrealistic beauty standards often dominate the conversation when looking at women’s bodies, including white bodies. In this monumental work, Saville provides a frontal and two profile views of a fuller-figured, middle-aged woman’s body. This work critically engages with the bodies found in paintings by Rubens and Titian, whose fleshy figures loom large in the art historical canon. Saville’s painting forces an uncomfortable challenge; how much flesh is too much? What type of flesh is expected to be admired on the walls of a museum? Often implicitly, there is an idealization of mildly curvaceous, young bodies. However, this painting offers a more realistic viewpoint of womanhood. 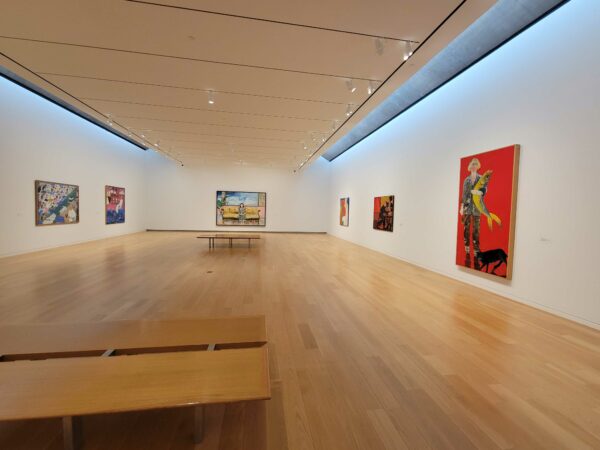 Installation view of “Women Painting Women,” on view at the Modern Art Museum of Fort Worth

Standing in a bra and panty, the figure offers her body for view as if she were examining her form in a mirror. Many women can relate to this stance and often experience it as a moment of harsh self-loathing based on societally programmed expectations. However, there’s a neutrality in the woman’s expression. Even more striking is the viewer’s position to her: viewers stand beneath her, her eyes following as visitors move around her in the gallery. There is great power to her elevation above us all as viewers are invited to take in all of her flesh, which is rolled, dimpled, and in some areas slightly discolored. The painting is a masterful study of a true feminine form. 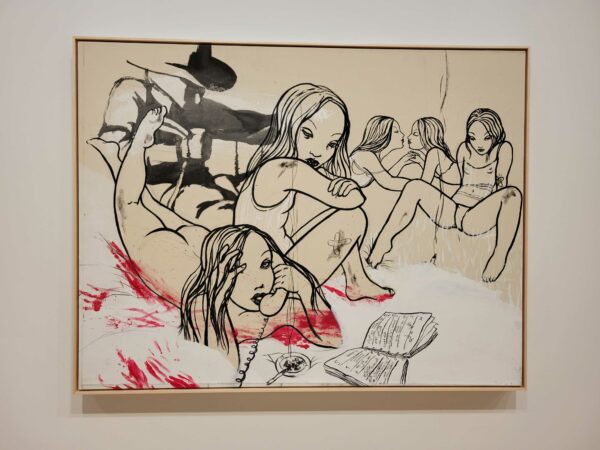 In addition to the diversity of artists on view, Women Painting Women highlights a diversity of styles and techniques. One less traditional work in the show is Rita Ackermann’s Get a Job. This acrylic on canvas painting features four vignettes of a young woman that read like a storyboard. At one moment, she reclines in a slightly suggestive pose with her legs spread open before the viewer in a sheer tank top, seemingly lost in thought as a cigarette burns in front of her. At another moment, she’s engaged in a sensual embrace with a young woman, notably similar to her in appearance. In the foreground are the most captivating and disturbing views: the young woman hunches in a seated position with bandages covering wounds on her arms and legs. A tear begins to form at the corner of her eye as she looks on at another version of herself resting flat on the bed. The prone figure holds a phone to her ear, and we get a peek into her weekly planner, which contains entries ranging from “DO LAUNDRY” to “get a job” to “get Heroin.”

This work, created in 1993, has a grunge feel — very of its time. There’s a strong sense of youthful angst in the form of the young woman trying to navigate life and relationships, including the one to herself. It also has a striking commentary on capitalism and women’s relationship to the economic world. The title, Get a Job, invites viewers to question what type of work this woman is pursuing. How is her body and sexuality commodified? This adds additional weight to the more abstractly rendered figure in the background at left, a masculine form in western dress who appears to be looking on at this woman in her many vignettes. Who is he? What is his role in this scene? The streaks of red paint across the lower left of the canvas hint at the dangers this girl may face as she embarks on the next stage of her life as an adult woman tasked with making her way through the world, financially and emotionally. 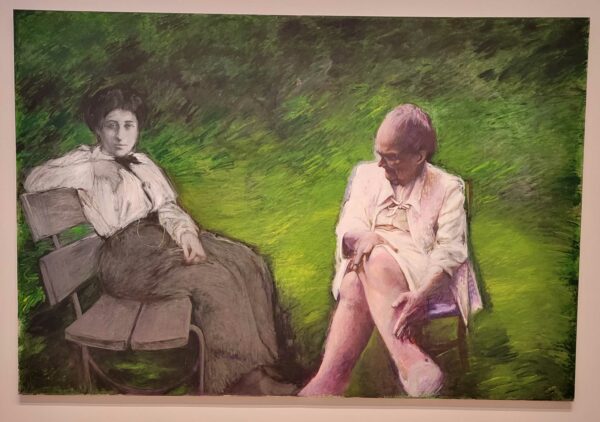 May Stevens’s Forming the Fifth International mirrors what makes this exhibition successful: placing women of different generations, backgrounds, and approaches in conversation. In this acrylic painting, Stevens depicts in grisaille Rosa Luxemburg, a socialist-communist activist murdered, in post-World War I Berlin, because of her political agitation. She is seated at left on a bench in front a green background, suggestive of a lush grassy field. Opposite her in the painting is Stevens’s elderly mother Alice, also seated, rendered fully in color. For the artist, both women embody a sense of feminism, though her mother’s expression of it as a housewife and mother was not as overt as it was in Luxemburg’s activism.

Ultimately, a diversity of approaches and expressions is the key takeaway from Women Painting Women. Each artist presented is capturing the many expressions of womanhood found throughout the world. The show reflects a major step forward in the presentation of women artists — while efforts to amplify the voices of women artists increased during the latter half of the twentieth century, these efforts often centered around the experiences of white, heteronormative, middle-class women. This exhibition extends the frame of a “woman artist” exhibition to include the unique lenses provided by women of color, non-binary women, and women of varying economic circumstances. The works in this show represent the best of the art world, regardless of gender.

Women Painting Women is on view at the Modern Art Museum of Fort Worth through September 25, 2022.