Westward, Faux: B Shawn Cox at the Dougherty Art Center

“Myth is constituted by the loss of the historical quality of things…a conjuring trick has taken place; it has turned reality inside out, it has emptied it of history and has filled it with nature.”
– Roland Barthes, Mythologies

Walking through the doors of Dougherty Art Center’s Julia C. Butridge Gallery, I’m greeted by many welcoming faces. Cowboys and pin-up showgirls span the space’s length, fanning out from either side of the entrance. On the right, black and white photographic prints of showgirls scantily clad in burlesque costumes are superimposed over cowboys in gunslinger stances, their pistols drawn and chaps strapped. On the left, colorful cowboy faces emerge from bold-patterned fabrics on which they’ve been rendered in oil and acrylic paint. Behind the Dougherty’s front desk, B Shawn Cox stands, wearing a big friendly grin, in front of a wall decal exclaiming Westward, Faux!, the name for his exhibition which runs through November 27th. 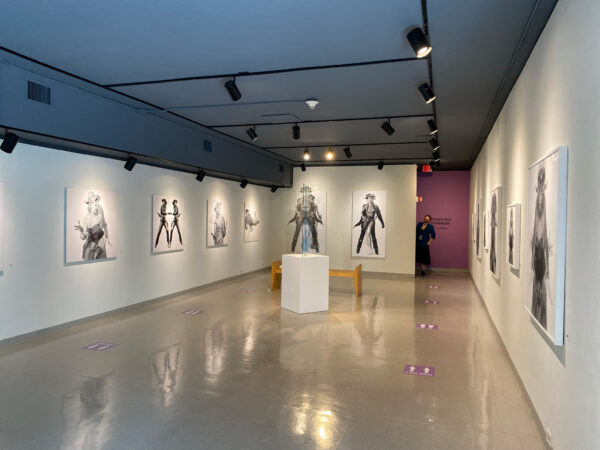 Westward, Faux! is a culmination of Cox’s largest and most recent bodies of work, in which he manipulates appropriated imagery to examine how visual media is used to perpetuate and glamorize the myth of Manifest Destiny. The myth is, of course, that westward expansion was a divine right and a necessary to the young and growing United States; it was used to conveniently conceal the nation’s colonialist agenda which exploited land, resources, and people. According to Cox, his interest in this mythology stems from an essay he wrote in an undergraduate American history class at Texas Tech University.

Walking me through the Dougherty, Cox recalled how his professor read the essay, titled Westward Expansion and the Myth of Manifest Destiny, in front of his class and then asked that its author identify themself. Cox shyly did (unsure whether the piece was read for the sake of praise or condemnation), to which his professor simply said “thank you.” He was pleased that Cox saw through the western guise of heroic cowboys, saloon damsels, and villainized natives — all perceptions that rival the manipulative nature of social mythologies.

In Mythologies (1957), Roland Barthes details how myths function to serve subtexts in politics and history: myths deceive by veiling certain historical facts, and do so by filtering reality. However, he writes, “myth does not deny things, on the contrary, its function is to talk about them; simply, it purifies them, it makes them innocent, it gives them a natural and eternal justification, it gives them a clarity which is not that of an explanation but that of a statement of fact.” In the case of Manifest Destiny, its myth is composed of an alluring narrative that conceals the dark reality of its bloody path. Furthermore, as it has been perpetuated throughout history, iconography, and visual media, its myth is now naturalized as fact. What began as a religious endeavor, buttressed by early paintings of angels guiding Americans’ westward travels (see John Gast’s 1872 painting American Progress), transformed throughout decades of American pop culture into Hollywood’s glamorized archetypes of strapping cowboys and sultry cowgirls. 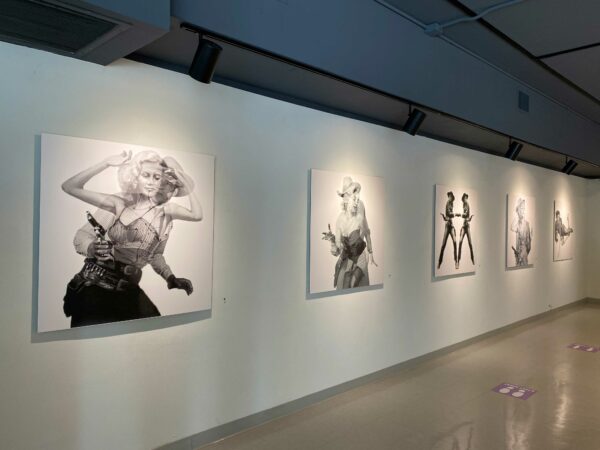 Such imagery is where Cox finds fertile ground for exposing the falsities of the American myth. Growing up in Monahans, Texas, a young Cox watched old western movies and shows like Bonanza with a dubious eye — he knew firsthand that ranching was not all leather and cowboy hats. Such misconceptions about western expansion and life on the plains are perpetuated by sexualized cowboy lore and iconography that plays to heteronormative standards.

At his show, Cox and I grazed around the room, looking at black and white prints made from photographs he sourced from vintage film. He made this body of work, dubbed Duality Portraits and Intersextions, by suggestively superimposing appropriated images of male and female figures, which created a hybrid of the western hero and the burlesque showgirl that toes the provocative. The new “duality” figures have been extracted from their original scenes and placed (or rather, displaced) against isolated white backgrounds void of context, allowing viewers to more closely examine how they glamorize and sexualize the myth of westward expansion.

Cox takes these duality figures a step further by referencing their cinematic past through the use of lenticular printing. The lenticular prints appear to move, kinetically shift, and dance as viewers observe them. This optical movement nods to the material’s dynamic source: cinema’s moving image. In the center of the exhibition sits sculptural pieces that further explore the visual dimensionality of Cox’s duality figures. Printed on intersecting pieces of plexiglass, three sculptural “intersextions” offer viewers different angles of the duality figures. 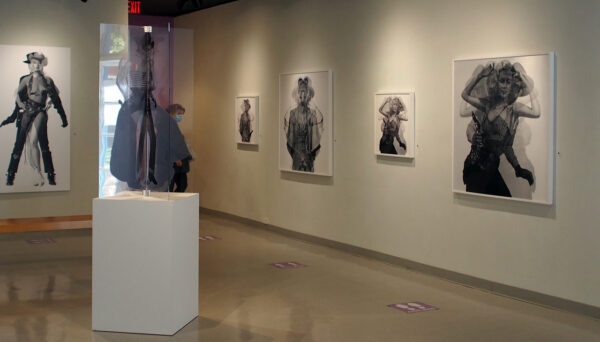 These are sexy: a woman wearing only a pair of spurs to cover her breasts and a leather gun holster as a skirt is superimposed directly between the legs of a cowboy clad in all-black leather. Pistols take on phallic forms. An image of a cowboy on a saddle, the horse removed, has been flipped and duplicated to create a figure eight with a vulvic innuendo. Cox is teasing out and amplifying his figures’ sex appeal to highlight how consumerism has permeated the representation of the western-bound United States. Why did he go this route? Because sex sells. Following Barthes’ explanation of myth, the historical reality of American westward expansion has been emptied and filled with a naturalized fiction of lustful glamour that’s justified through mass consumption.

The proliferation of Cox’s chosen iconography also reinforces gender norms: the powerful, hypermasculine cowboy versus the pretty woman whose physique is displayed for the male gaze. The transparency of Cox’s duality figures and intersextions allows the hybrid figure to take on androgynous qualities as respective features blend. The fluidity in their physicality, as well as their conception in film, reveal their performative nature. Like gender, myth is performative and, as Barthes wrote “is certain to participate in the making of the world.” By exposing the role of iconographies in perpetuating the myth of Manifest Destiny, Cox is subverting their original meanings. 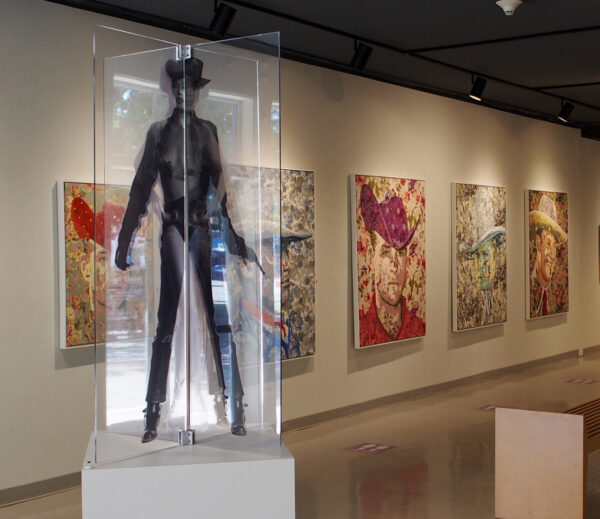 This objective extends to Cox’s work at the opposite end of the gallery, where there are new evolutions of his polka.dot.rodeo paintings, which were initially shown in his sold-out show at The Commerce Gallery in Lockhart, Texas. For them, Cox stretched patterned fabric over the canvases to serve as a background and starting point for each composition, to which he added complementary layers of painted geometric patterns, grids, and adornments, which combine into layers and allude to Cox’s architectural training. The resulting painted portraits of cowboys both camouflage into and emerge from the fabric. Cox again subverts their representations as archetypes of the hypermasculine cowboy by infusing them with floral patterns and brightly saturated pastels — they’re campy, with cheeky titles like Garden of Western D-Lites and Aloha in Texan. 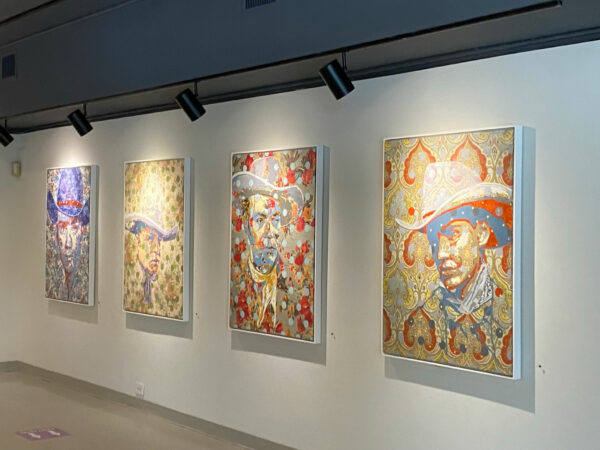 Through his use of material, subject, and style, Cox is commenting on the role of mass production in perpetuating social mythologies; the fabric itself is a mass-produced domestic commodity: the archetype of the cowboy has undergone numerous iterations in the media environment for decades; and his paint-by-number approach recalls mass-produced catalogs used to replicate artwork. The guise of coopting cowboy iconography to conceal westward expansion’s colonial pursuits has been fueled by the ever-increasing pace of capitalism, evidenced by the recent popularity of western aesthetics in fashion trends. At face value, Cox’s paintings could be read as just that — another stylish variation of western sentiment. However, Cox is not creating work to reminisce on old Hollywood westerns or glorify their archetypal representations. Rather, he is replacing their nostalgic endorsements with a critical lens to better understand how the imagery reinforces the mythological subtexts of Manifest Destiny. 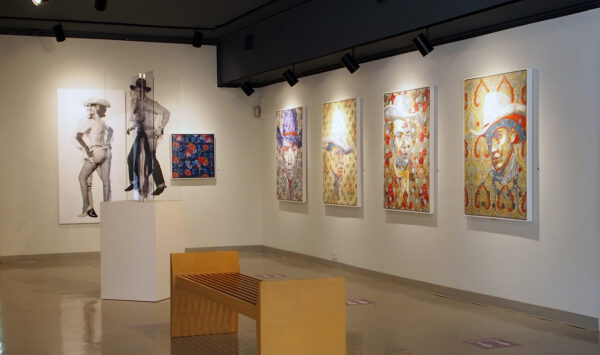 Viewers may recognize actors or celebrities in Cox’s work, but he isn’t creating individualized portraits. Instead, his subject of interest is what the figures collectively represent. Take, for example, John Wayne, the iconic embodiment of the American cowboy. Let’s consider what qualities make him such: he was tall and strong and had a burly gait, and above all, he was white. Noticeably absent from Westward, Faux! are any bodies of color. This was not oversight on Cox’s part, but instead was a tool to help him expose how myths function (according to a lack of historical accuracy), because man’s relationship to myth is, as Barthes claims, “based not on truth but on use: they depoliticize according to their needs.”

The myth of Manifest Destiny has depoliticized its reality through the exclusion of certain facts, such as the massacre of the native people that long occupied western lands. The murderous frontiersmen have been purified into handsome, heroic cowboys with stylish clothes and pretty women on their arms. Mass consumption of this archetype has rendered it factual, and capitalist structures have made it commodifiable. Cox’s work is subversive because he uses the same iconography that perpetuates the myth to expose it as a farce. To understand his intent, look no further than the show’s title itself: Westward, Faux!

B Shawn Cox: Westward, Faux! is on view at the Dougherty Art Center through November 27, 2021.