From the Laredo Center for the Arts:
“Los Dos Laredos is a space from my past. It conjures the border towns of my youth, Laredo and Nuevo Laredo. This place, now so changed, lives on in my memories and in the stories my family chooses to tell. It is a magical place, and a large one with a combined population of 775,481, together the two towns spread over 786.26 square miles. There, people moved freely back and forth across a river, between two cities, between two countries, and between two languages.” 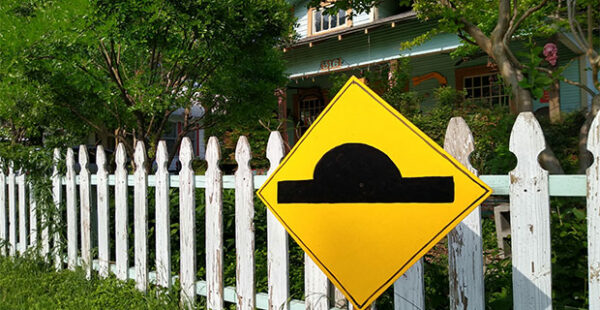 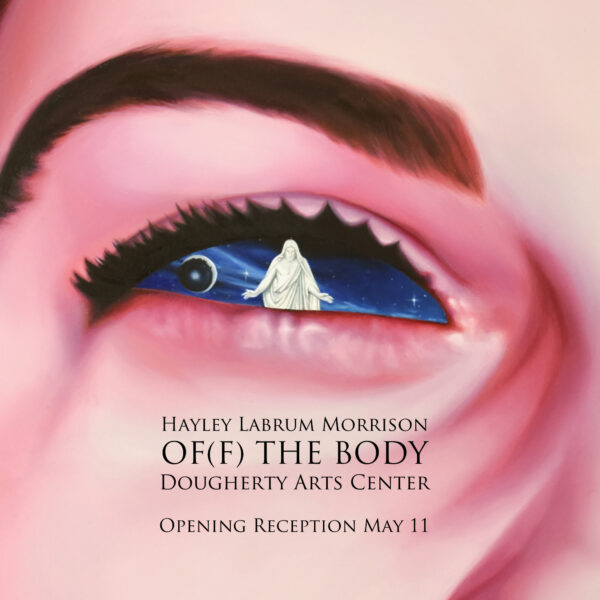 Exhibition graphic for “Hayley Labrum Morrison: Of(f) the Body,” at the Dougherty Arts Center in Austin

From the artist:
“Teachings of purity, modesty, and meekness are central to a young Mormon woman’s spiritual curriculum. Of(f) the Body examines the effects these definitions of worthiness can have on the female spirit, mind, and body.” 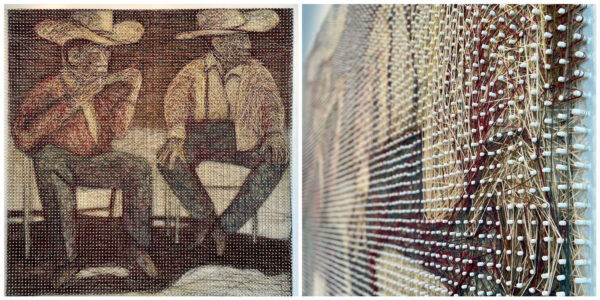 From Hooks-Epstein Galleries:
“Marcos Hernandez Chavez has developed his creative style over time as a result of his constant experimentation and transformation of everyday construction materials such as tar, sand, asphalt, and drywall sheets. In his most recent body of work, Chavez leans into finding new materials to create his pieces and often relies on an expressionist compositional origin for his artwork. His practice has evolved to focus on the use of fibers; he constructs wooden pegboards and weaves various colored strings, layering them until he can no longer entwine the pegs.

In this exhibition, entitled El baile de los que sobran, which translates to ‘The dance of those left over,’ Chavez means to create a more concrete emphasis on the subjects in his work, while showcasing the craft authorship and the human heritage that are inherent in each piece. He further delves into themes of labor, environmental issues, and economic and social disparity.” 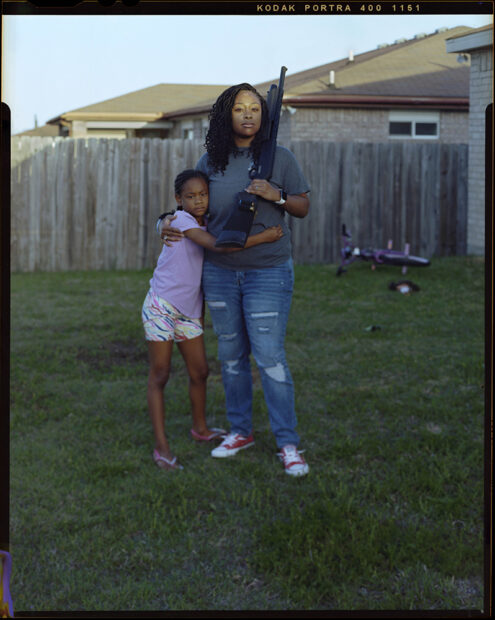 From the San Antonio Center of Photography:
“In America, Black gun owners are often portrayed negatively. Christian K. Lee set out to change that. Growing up in Chicago, Lee routinely saw negative portrayals of Black Americans with guns. Black men across America who owned handguns were associated with gangs and criminals. This phenomenon made it difficult for him to grasp wanting to own a firearm. But at home, Lee saw a positive, responsible side of firearms ownership. His father was an Army veteran and a police officer.

Armed Doesn’t Mean Dangerous aims to promote a more balanced archive of Black Americans with firearms by showing responsible gun owners — those who use these weapons for sport, hobby, and protection. Many of the subjects Lee photographs are middle-class professionals, which he believes are designations that have allowed them to escape much of the stigma attached to Black gun ownership in America. Lee hopes to dismantle outdated stereotypes that deem being Black and armed as dangerous, threatening, and contrary to what it means to be a law-abiding citizen in the United States. He often wonders if people’s perceptions would change if his subjects lived in different ZIP codes or were photographed in attire stereotypically connected with violence.”