Loved to Death, the Dougherty Arts Center May Be Shopping for a New Home 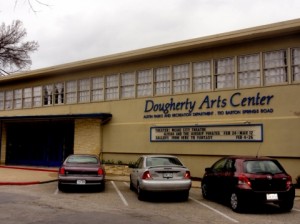 Sarah Coppola in the Austin American Statesman reports that the city’s Dougherty Arts Center, high-traffic home to theater, pottery classes, art exhibitions and everything in between, is in sad shape. The 65-year old building was built on a flood plain, its foundation is growing uneven, and its roof needs work. Worse yet, it was constructed in 1947 as a U.S. Naval and Marine Reserve Center over a “burn pit” landfill, which would have to be remedied as part of any major new construction. According to Marty Stump, a project management supervisor at the Austin parks department, which manages the center, fixing it would likely cost $7 million, nearly as much as the $9 million estimated for an entirely new building on the same spot. The center is too popular and heavily used to just close, so the Austin parks department is shopping for another building to house the Dougherty’s multifarious activities with a hoped-for $2 million in bond money that could be approved by Austin City Council later this summer.