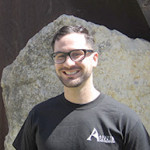 Alberto Mejia II is the new manager of the city of Austin’s Dougherty Arts Center. Mejia arrived in Austin this summer from Seattle, where, as a self-described “engaged idealist” he organized youth arts programs for the EMP Museum, a Seattle nonprofit “dedicated to the ideas and risk-taking that fuel contemporary popular culture” and with enough money from Microsoft co-founder Paul Allen for an outlandish guitar-inspired Frank Gehry building!