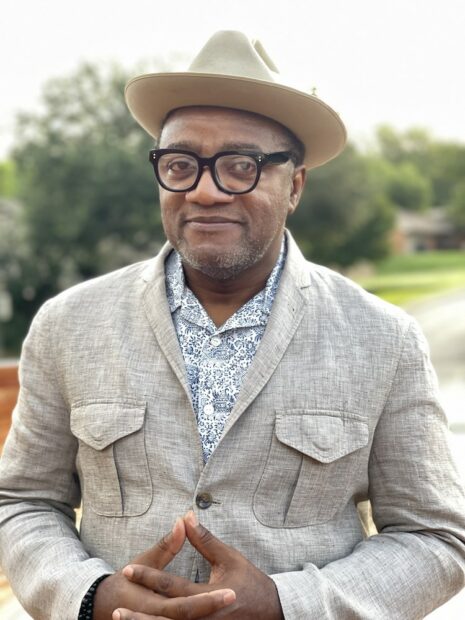 Christopher Blay will start his appointment as the new Chief Curator at HMAAC on Sept. 1

Before joining Glasstire full-time in the summer of 2019 and moving to Houston from Fort Worth that fall, Blay worked as a curator independently and for ten years for the Art Corridor Galleries at Tarrant County College in Fort Worth. While at Tarrant County College, he organized dozens of exhibitions from artists such as Trenton Doyle Hancock, Riley Holloway, Letitia Huckaby, Sedrick Huckaby, Annette Lawrence, Rosie Lee, Vicki Meek, MOOSH, and Niyi Olagunju, among others.

“Christopher Blay was the first, best and most exciting choice to emerge from our selection process,” states Barnes in the announcement. “His skills and varied experiences will find a welcoming home at HMAAC and will enhance our cultural community beyond measure.” And Ragbir states: “We were all impressed with Blay’s extensive curatorial, artistic, writing and educational experience. His understanding of how Texas fits into the larger cultural landscape will help take the HMAAC to the next level.”

Christopher Blay is an artist, writer and curator with a B.F.A. from Texas Christian University in Fort Worth. He has been a contributor to Glasstire since 2016, beginning with a Glasstire artist-in-residency that year under the name of his onetime alter ego, Frank Artsmarter. His contributions to Glasstire prior to his full-time appointment at the publication included reviews, op-eds, and essays. Blay was also an art critic at the Fort Worth Weekly Magazine and an assistant Photo Editor at the Fort Worth Star-Telegram.

Blay’s own artwork incorporates photography, video, sculpture, and performance. He has a solo exhibition opening at Big Medium in Austin this coming fall. In 2013, he received the SMU Meadows museum’s Moss/Chumley Award for his “proven track record as an active community advocate for the visual arts,” and the Nasher Sculpture Center’s Artist Microgrant in 2015. Blay was also the spring 2017 Visiting Artist at the Dallas Museum of Art’s Center for Creative Connections, and was the first curator-in-residence at Fort Worth Contemporary Arts. Blay is a 2018 recipient of the Otis and Velma Davis Dozier Travel Grant from the Dallas Museum of Art, and he was an inaugural Carter Community Artist at the Amon Carter Museum of American Art.

Via HMAAC: “Blay has worked in proximity with artists, community advocates, and museums to create the strong connections that are part of the mission of HMAAC. He has worked with the Lenora Rolla Museum in Fort Worth, and created a two-year-long community project titled The Ark on Noah Street in the old Dallas Freedman town of the Historic Tenth Street District. In Fort Worth’s Evans Avenue neighborhood (another Freedman Town) Blay is near completion of a seven-year-long public art initiative in which he uses an old transit bus to tell the story of the role of buses in the civil rights movement as it relates to the history of the neighborhood.”

States Meek about the search and Blay’s appointment: “The HMAAC Board of Directors took a different path than the status quo when they decided to forego a search firm and instead hire three seasoned African American women arts administrators to conduct the search for their inaugural Chief Curator position. After several months of disseminating the job announcement, the Search Committee was pleased to present the Board with eleven candidates. After a careful examination of their credentials, they put forward two applicants to fill the position. ‘The new position of Chief Curator that Houston Museum of African American Culture created needs a unique blend of curatorial expertise, community engagement know-how and Afrocentric knowledge.’ Christopher brings all of these to the table and much more. His prior curatorial experiences coupled with his strong art criticism background assures that the museum has a person who both knows the world of artists from the African Diaspora as well as the local Houston area. HMAAC is lucky to have someone with so many talents join its wonderful staff!”

States Blay: “I am very humbled to be welcomed into this venerable institute that plays such an important role in the local and national community. My passion is working with artists and their big ideas, and nothing is more fulfilling than playing a small role as curator to bring these big ideas to the public. I am also particularly grateful to my writing family at Glasstire, to whom I am deeply indebted for giving me the privilege to write about art in Texas. Thank you to CEO John Guess and Board President Cindy Miles, and the entire HMAAC Board and staff for welcoming me into the HMAAC family.”

Says HMAAC CEO, John Guess, Jr.: “Christopher Blay is the perfect fit for a community-centered museum like HMAAC with his museum and community sensibilities and accomplishments,” and HMAAC Board President Cindy Miles adds: “There were a number of candidates that we were excited about, but Christopher Blay was in the top tier referred by our independent Search Committee, and we are thrilled to have him join us at this particular junction in the museum’s growth.”

A hearty congrats to Christopher Blay on his appointment!

The mission of HMAAC is to collect, conserve, explore, interpret, and exhibit the material and intellectual culture of Africans and African Americans in Houston, the state of Texas, the southwest and the African Diaspora for current and future generations. In fulfilling its mission, HMAAC seeks to invite and engage visitors of every race and background and to inspire children of all ages through discovery-driven learning. HMAAC is to be a museum for all people. While our focus is the African American experience, our story informs and includes not only people of color, but people of all colors. As a result, the stories and exhibitions that HMAAC will bring to Texas are about the indisputable fact that while our experience is a unique one, it has been impacted by and has impacted numerous races, genders and ethnicities. The museum continues to be a space where a multicultural conversation on race geared toward a common future takes place.

This is wonderful news! Houston is lucky to have you, Christopher!

From an ex-Chief Curator to a new a new one, congratulations Chris. You’ll do a great job.
Michael Auping

Michael, you introduced me to so much great art that it is easy to say you were the most influential curator in my life as an artist and curator. I am not alone in being very grateful for the legacy you left Fort Worth and the art world. Thank you.