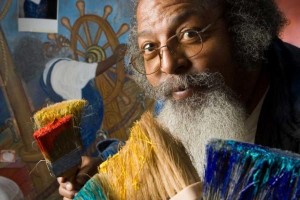 Since iconic Houston artist Bert Long died last year, friends and fans have been busy paying tribute. Last month, there was a celebratory fundraiser to help publish a posthumous book on the artist and now, in conjunction with the exhibition Bert: Back and Beyond on view through March 8, Deborah Colton Gallery will be screening the documentary, Bert, on Wednesday, February 26. Written, produced, and directed by Houston-based arts patron, John Guess Jr., the film follows Long’s life as seen through the eyes big-time admirers in the art community.

For those who couldn’t get past the overflowing crowd at the Menil Collection’s Valentine’s Day screening of the documentary will want to arrive early. There will be a 6:30 pm reception; the film starts at 7 pm, followed by a Q&A with Guess, CEO of the Houston Museum of African American Culture.