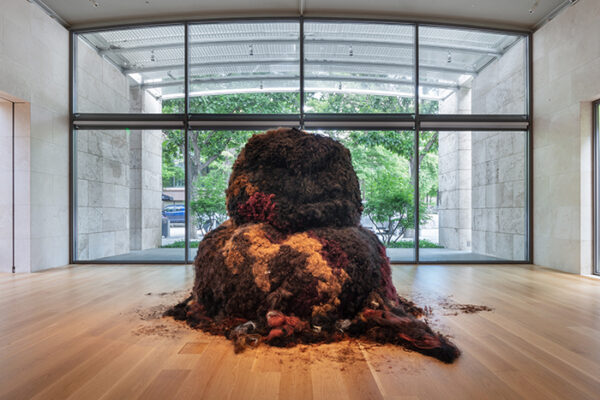 “Daddy, how come I don’t have good hair?” is a quote Chris Rock attributes to his then three-year-old daughter, and it inspired the comedian’s 2009 documentary Good Hair. Rock’s movie delves into the culture of Black hair and begins with a look at what some consider “good” hair (straight, soft, no kinks or stiff curls). Rock then expands the picture to the cultural sanctuaries that Black hair salons and barbershops represent, and on through to the factories and laboratories manufacturing relaxers or “creamy crack” used to correct (straighten) naturally curly black hair. Jer’Lisa Devezin’s Beaucoup Shive / Madam C.J. Walker ain’t got nothin’ on me gets to the root of the history, culture, and politics of Black hair with Beaucoup Shive, her largest sculpture to date, on view through this weekend at Nasher Sculpture Center in Dallas. 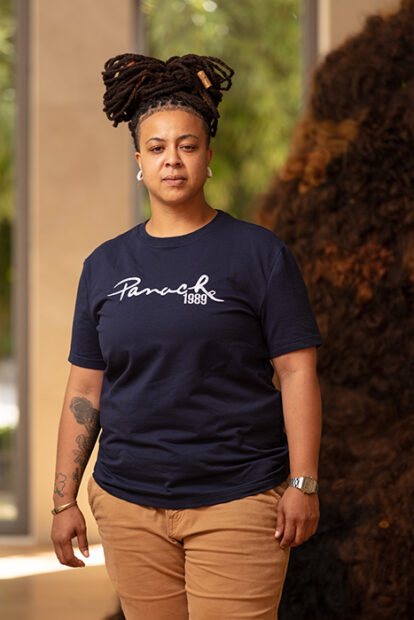 My only opportunity to see the show was on a day that the Nasher was closed. However, my street-view, through-the-window perspective — though not the complete experience the artist intended — did not diminish the power of Beaucoup Shive. What was lost in the absence of a complete sensory experience (the work includes an audio component and the smell of hair) was made up for in the visible textures, grandiosity, and audacity of the work, even when viewed from behind glass. The contradiction of seeing discarded hair from the top of a Black person’s head in the white cube gallery of a museum, considering the historical absence of Black people in this kind of art space, is breathtaking. In a way, being on the outside looking in is an apt metaphor for experiencing issues around Black hair from a Black woman’s perspective. 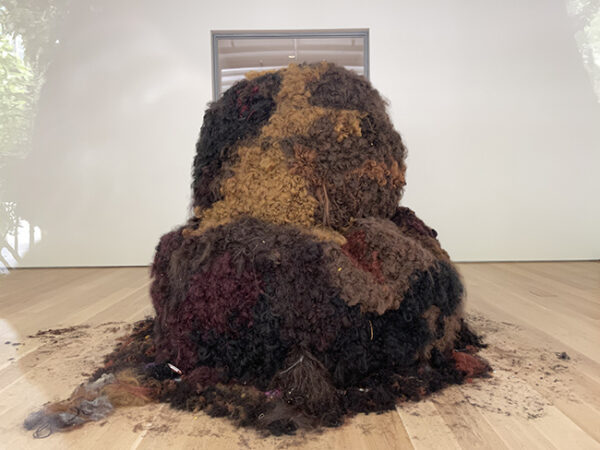 My window view of Beaucoup Shive.

The larger-than-life mound of clumped hair, a mixture of synthetic and natural strands from discarded and found sources, takes on a spiritual and sacred connotation when considered in tandem with the series of performances titled Kept that Devezin has scheduled in the gallery while the exhibition is up. The last performance is Saturday, June 19, during the exhibition’s final weekend. In one video from a Kept performance, the artist walks around the mound, applying hair spray in puffs — the fragrant mists evoke the spiritual. Devezin is Joshua circling the walls of Jericho, and with each spritz, blows a hole in the walls of stereotypes and prejudices that encircle Black women and their hair. 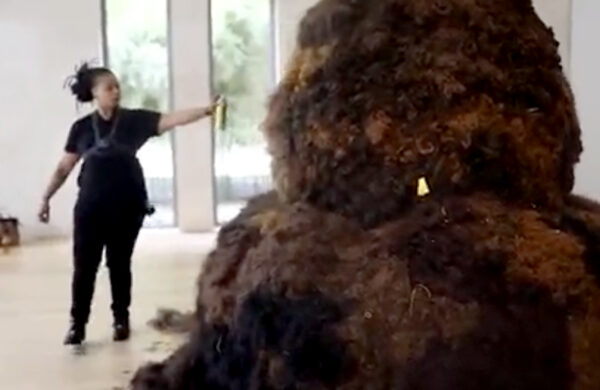 Like many Black men who have experienced it, my connection to the struggle Black women experience around their hair is from a distance, even if that distance was under the same roof. I remember my mom’s hot comb on our stove, heated and applied to my sisters hair as she got them ready for church or school. The aroma of curly hair heated to be straightened, the pulling and parting, and greasing, and plaiting — all of it — becomes a universal experience that makes seeing a sculpture like Beaucoup Shive as recognizable as family. My daughters have come to their own reckoning with their hair, choosing to wear and style it as it naturally grows. 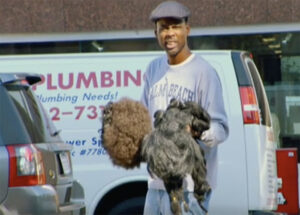 The rich context in which Beaucoup Shive exists extends through artists such as Lorna Simpson, Mark Bradford, Rabea Ballin and others, as well as icons of the Black Power movement such as Angela Davis and Nina Simone, who wore their afros with pride. When politics and social climate make necessary initiatives such as the Crown Act — which was born from discrimination against Black people for existing in their own hair — Beaucoup Shive becomes even more timely.

Born in New Orleans’ Lower Ninth Ward and currently based in Dallas, the 2019 SMU graduate’s work is influenced by the culture of the African diaspora, including Haitian art and Black culture. Her other works include Kiss My Ass, a performance based on the life of Saartjie (Sarah) Baartman (pejoratively referred to as the “Hottentot Venus”), Makin’ Groceries, Four the Hard Way, and a series of sculptures and ceramic works that can be found on Devezin’s website here. The artist is also an inaugural recipient of Talley Dunn Gallery’s Equity in the Arts Fellowship, and her work is part of the Fellowship’s group exhibition at the Dallas gallery through August 7.

“Beaucoup Shive / Madam C.J. Walker ain’t got nothin’ on me” is on view at the Nasher Sculpture Center through Sunday, June 20. There is a performance on Saturday, June 19. For more information, please go here.