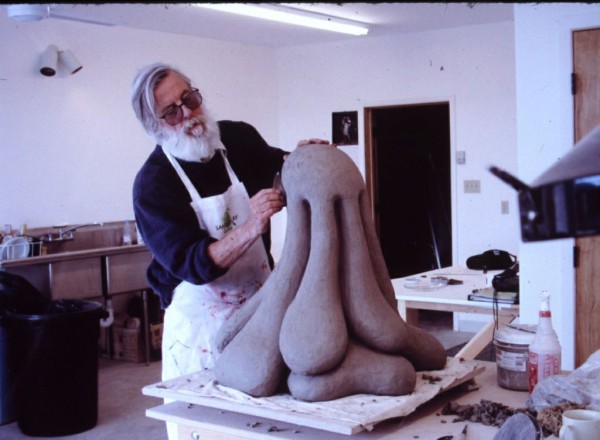 As senior curator of modern art at the Los Angeles County Museum of Art (LACMA), Stephanie Barron catalyzed the Nasher Sculpture Center’s current exhibition, Ken Price Sculpture: A Retrospective. Originating at LACMA and moving next to the Metropolitan Museum of Art, the show was organized by Barron and Price himself up until his death from cancer in February 2012, six months before the show’s LACMA opening. Barron was in Dallas to oversee and participate in the Nasher opening, and I had the privilege of interviewing her inside the exhibition, surrounded by Price’s spectacular work. 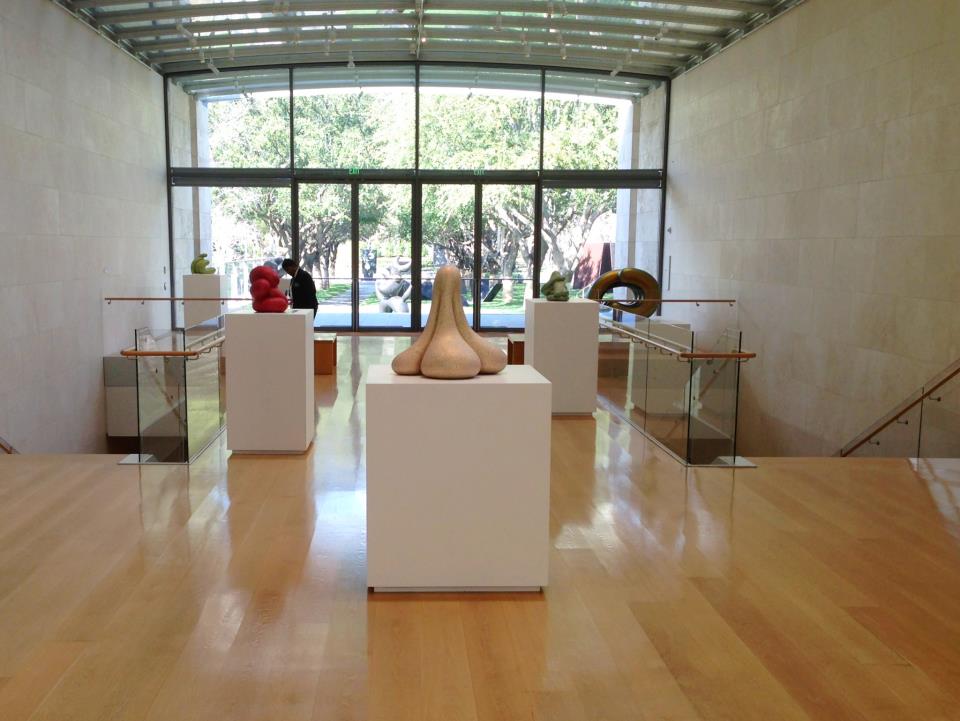 Betsy Lewis: Did this show here in Dallas have to change at all from the show in L.A.?

Stephanie Barron: Sure, because our spaces are different. The exhibition was designed by Frank Gehry in collaboration with Ken Price and with me, to be specific for each of the venues. We actually created, in Gehry’s studio, models for each of the spaces. We flew those down to Taos and worked with Ken on the layout for every venue.

BL: So Nasher was part of this…

SB:…from the very beginning, and so was the Met, and the spaces are very different. We had one long space with natural light; you have two spaces, that actually turned out to be three spaces on two floors; and the Met has one smaller space with no natural light.

BL: Did it turn out to be the show that Ken envisioned, if I may call him Ken?

BL: Did anything have to be compromised or left out?

SB: Originally we were going to have three works in the lobby. I made two trips down here, first to lay out the show with no art, just the pedestals. I realized, when not one single work of art was unpacked, that it was too crowded. Even though on the model it looked okay, the works need space around them, so I moved four pieces into the lobby.

BL: Don’t you love those moments when you have to wing it?

SB: Totally. With any curator, you change it when you’re in the space. You never do it one hundred percent the way it is on the model. You try to kind of approximate it. I hadn’t intended to put two works there, but it became clear that I might as well embrace the space, because the show is—here and at every venue—in reverse chronological order. This made it really perfect to begin with the most recent work.

BL: The reverse chronological order implies that his work changed over his lifetime.

SB: For any artist it does. There is no sense, when you walk in here, of talking about this in any terms other than sculpture. If you were to start with the small works—cups, specimens—you would start talking about clay and ceramic. This show is a sculpture show. 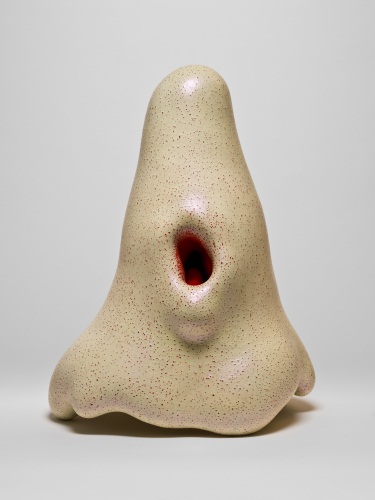 BL: Why are those different? I’ve never understood how ceramic and sculpture…

SB: There is, because ceramic has been, for much of its history, something which is used to make something utilitarian. You make a cup, you make a plate, you make a vase. It has a use. He, together with Peter Voulkos, John Mason, those guys in the ’60s, were pushing the envelope of what you make sculpture out of. They chose to try to make it out of clay. For Voulkos and Mason, they made big, macho works. Ken had more of a challenge because he made small-scale work. Small-scale work risks even more of the challenge of being considered domestic, decorative art, craft, all that stuff. 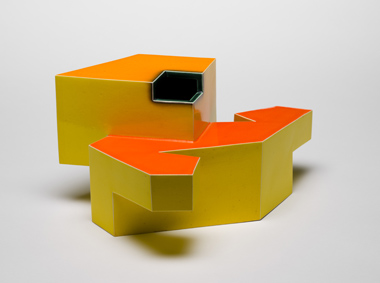 BL: Do you know if, when he died, there was work left unfinished?

SB: Sure there was. When I invited him to do this show in 2009, he was already terminally ill. Whether he would live to see the show was a race against the clock. He died six months before the show opened. When I invited him to do the show, he had been at UCLA undergoing experimental treatment. It wasn’t really working. He said to his wife, “Pack up. Let’s go back to Taos. I’m going to spend every minute that I can in the studio until I die.” And he spent three years working and did, I think, some of his most exuberant, joyful, out-there work. If you look at this stuff, this is not the work of a guy who’s about to die. It’s really amazing. I like to say it’s like being on a tightrope without a net. He was pushing the envelope of scale, he was inventing new forms.

BL: It looks like he was squeezing every last minute out of life.

SB: Everything. And they are incredibly joyful. They are not morose; they are not somber.

In planning this installation, there were certain caveats, architecturally. Everything had to be on a white pedestal. From the very beginning, I knew how we presented the work was key to how it was going to play, so I asked Frank Gehry to design the show. This is the fifth or sixth show I’ve done with Frank. Frank and Ken were really good friends, starting in the late ’50s at USC, and Frank owns a number of works of Ken’s. He really understands the work and Ken trusts him. I knew that, particularly as Ken’s health was declining, he had to have somebody he trusted implicitly. He trusted Frank. To have the privilege as a curator to watch the two of them do something positive for the last three years, when they were both incredibly sad that he was dying, was something that I never witnessed before, and won’t, probably, ever again. It was an amazing experience.

Frank helped us solve Ken’s requirements: one work on a pedestal, lit directly from above; no glass, no plexitops. Most sculpture shows are a sea of pedestals and ugly vitrines, but this show has very few works that are covered. That brings with it the opportunity to really have that sense of immediacy. What you see architecturally—the walls, the pedestals, the furniture, the glass boxes—all designed by Frank. 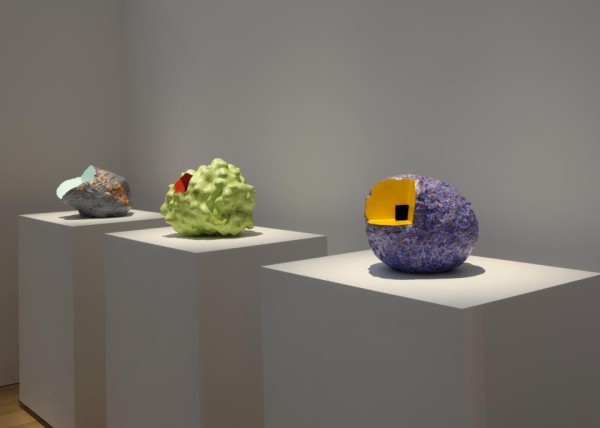 BL: I’ve never seen this space look like this. It’s like being in a brand new space.

SB: It’s thrilling. It’s like this ultimate gorgeous jewel box. It has a kind of rhythm and syncopation. The works just glow. They seem to have an inner light. The lighting makes an enormous difference. 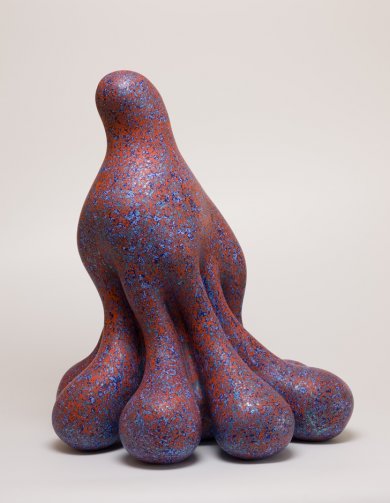 BL: I have a question specifically about Balls Congo. It’s being used in all of the marketing materials in Dallas. Of the arts writers in Dallas, I’m the saucy one, I’m the raunchy one.

SB: Then you’ll have fun in this show!

BL: I thought of testicles when I saw that piece.

SB: I think you see in it what you WANT to see.

BL: Ha! How will you explain something like this to little church ladies who come through the Nasher? There were a bunch of nuns walking into the DMA across the street as I was walking in here.

SB: There’s a beautiful quote from Ken on the wall over here…

“I think meaning is ambiguous. I make concrete objects that stay the same pretty much the whole time they exist, and you can go away, and you can come back, and maybe you’ve changed, but the object will still be the same.” 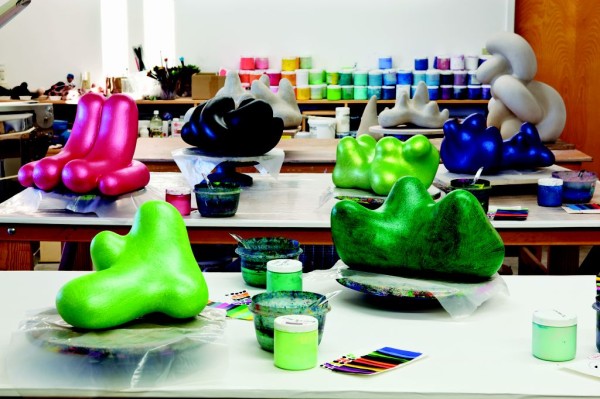 Ken Price Sculpture: A Retrospective
Nasher Sculpture Center
Through May 12

Betsy Lewis is a Dallas writer sautéed in a special Diablo sauce, which consists of a fine blend of coffee, orange juice, tomato sauce and other fine spices.

Our Man Michael Govan Thinks That a Curatorial...