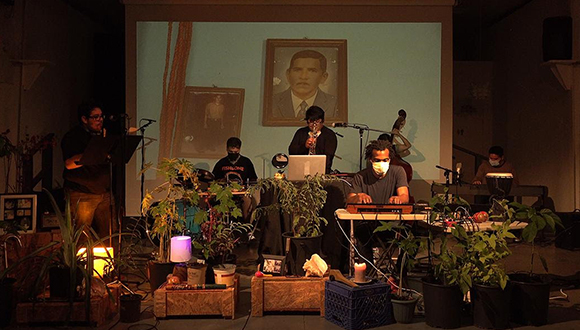 FRANCIS and ANTHONY ALMENDÁREZ- NAVIGATING THE ARCHIVES WITHIN at Aurora Picture Show, Houston.

The most interesting and beguiling creative zone is the in between — the liminal, ineffable space between sound and music, narrative and image, meaning and aesthetic. Here, art achieves its highest cosmological purpose, the ability to articulate that which cannot be explained, written, or conveyed through logic or equation.

This is why I am so drawn to “difficult” art: slow cinema that blurs or downright bucks the demarcation between “film” and “video art;” (by the way: support the wonderful Austin Film Society and rent the 4K restoration of Bela Tarr’s mid-career masterwork Damnation. Don’t worry it’s only two hours long. Watch the shots of rain water running down the walls of buildings and tell me that’s not art); the musique concrète works of Pierre Henry or Luc Ferrari that finds the celestial harmonies of field recordings of city sounds, sheep herders, heavy machinery et. al.; and the ever-refracting, shifting landscape of mixed and multi-disciplinary media art that allows one to share or withhold infinity through an endless helix of reference and symbolism.

Francis & Anthony Almendárez’s Navigating The Archives Within, streaming through Aurora Picture Show’s website through midnight tonight, is an ambitious project that combines free improv music, an essay-like voice-over narrative critique, video by the brothers, and a collage of film, tv, cartoons, news, and sports. The music begins haltingly, skittering off-tempo — an unsettling machinery of dislocation. The film begins with “homestyle” videos of a tropical, lush environment; a dog runs along a winding back road. Meanwhile Francis narrates a far-ranging meditation — equal parts media critique, personal history, and righteous polemic on being Latinx, growing up in South L.A., the brothers’ family history, living (or trying to live) in America. The film shifts from the personal videos to a media collage: Sammy Sosa hitting a home run, Selena, Desi Arnaz, Speedy Gonzalez, Scarface, Zoot Suiters — a swirling, overwhelming roar of stereotypes and representation — less a kaleidoscope than the submerged vertigo of being pulled under a waterfall.

Like Arthur Jafa’s Love Is The Message, The Message Is Death, Navigating the Archives Within is an unsparing, sometimes despairing elegy and fury against the toll of racism and systemic oppression. In Navigating, occasionally the music will sync with the image or lock into a fleeting, euphoric groove — a moment of ecstatic release and freedom before the threads get pulled and it comes undone again. This is essentially the navigating of the perilous and labyrinthine archives of one’s identity and history. How does one find the “self” through the brutal, tear-gas haze of bigoted stereotypes and the panopticon maze of racist policy? The performance answers by ending on a hopeful and resilient note — the piece is a compass of sorts, pointing to the center of the archives, the end of the spiral shell, the door that lets you out.