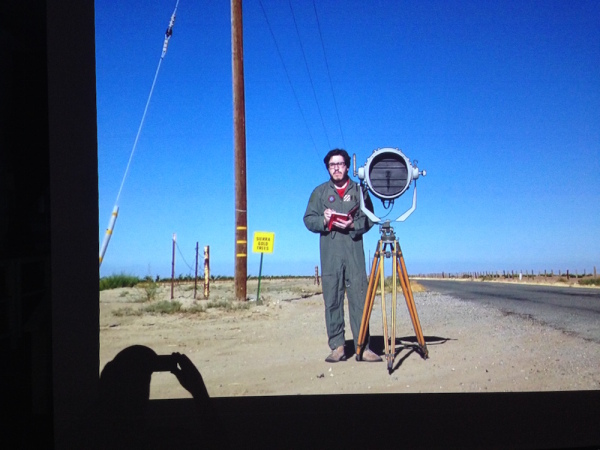 Nick Bontrager’s Signals at Aurora Picture Show in Houston is an interactive video installation where you send text messages to the artist (hidden away in a secret bat cave somewhere) and he replies via Morse code. The messages are less important than the communications equipment, which is good, because little if any communication actually takes place. 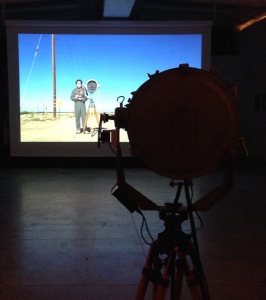 Visually, what you get is this: a video projection of a bearded man in army-green coveralls standing next to a cylindrical piece of tripod-mounted equipment that turns out to be an army-surplus signal lamp- basically a spotlight with shutters that allow it to be opened and closed rapidly to make discrete flashes of light. At different points in the video, he’s in a forest, on a beach, or in the desert. A similar lamp stands in the gallery, pointed at the movie screen. The guy on the screen is waiting for us to make the first move. A gallery attendant from Aurora led me to stacks of message forms on clipboards and gave me Bontrager’s phone number.

No doubt signal lamps are an effective means of communication in wartime, when radio silence is necessary. I appreciate the irony: I tapped out little letters on my phone, which were translated into little dots and dashes of light, substituting a cumbrous process for today’s all-too instant messaging, but the absurdity doesn’t make it more fun. If Bontrager had been there in person, I might have asked about his work, or commented on the weather, just to be polite, but  I didn’t have anything to say to him important enough to overcome the obstacles he imposed on our communication.

I texted a couple messages, watched the gallery lamp flash them at the screen, and dutifully noted down the Morse code replies from the image of Bontrager, but couldn’t decipher them before my patience ran out. There are dozens of app to do that. I’ll download one someday. 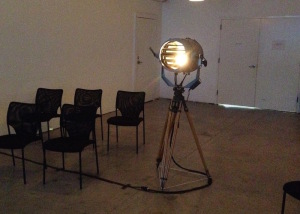 Signals is geek art, fetishizing antique technology, akin to the works of the legion of “lens-based artists” who began to riff on stereopticons and zoetropes as digital imaging became commonplace. Bontrager has devised two machines: one which translates text messages into the automatic flashes on an antique signal lamp, and another which changes the artist’s replies into images of the artist signaling back with a similar lamp on the video screen. In between the two machines, which do the interacting with visitors, the hidden artist personally receives, interprets and responds, in the normal, efficient way, to like the great OZ, hidden behind the curtain. It’s an interesting toy, and it certainly highlights the contrast between today’s instant messaging and the slow transmission of information via creaky lamp signals, but I was mostly aware of self-conscious obstacles placed there in the name of art. As I composed a text message for transmission, my finger hovered over the phone button. I was tempted to just call him.

Signals by Nick Bontrager was on view at Aurora Picture Show from February 6-13.

The first Morse Code translator I found online came up with this: TETETTTTTTETEE

Are you pulling our legs? Is this a phonetic version of one of your kinetic sound pieces?

No, it’s “cool”. The website parsed out the spaces, difficult to read.

Nick parsed it out, which was great. Nice work Nick.

BTW: Samuel F.B. Morse Lovers: His masterpiece painting of the Louvre will be at the Amon Carter Museum in Fort Worth this year. I’ve never seen it and am very excited. He was a very talented painter and help bring the Daugerreotype to America. He found out, like most of us, art is tough, and moved on to other things.