Christopher Blay and guests Danielle Demetria East, Robert L. Hodge, David Jeremiah, and Vicki Meek present a list and a conversation highlighting works by artists confronting social issues, and exasperation with having to do so.

“Unfortunately it’s a topic we have to revisit over and over again because it doesn’t go away.”

To watch last week’s Top Five in which Christina Rees and Brandon Zech make a case for a road trip to Beaumont, please go here. 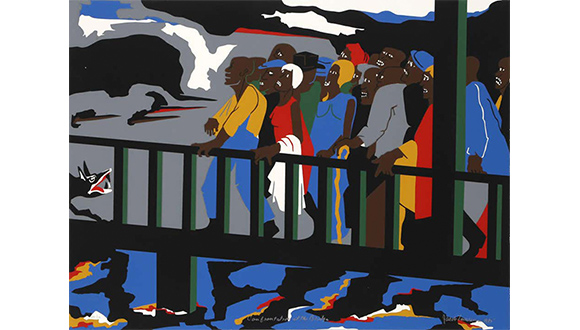 Via Cleveland Museum of Art:

“When Jacob Lawrence was commissioned to execute a print to celebrate the United States’ bicentennial in 1976, he illustrated the March 7, 1965, march by unarmed protesters objecting to the denial of African Americans’ right to vote. The march began in Selma, Alabama, but before the 600 protesters could reach the state capital in Montgomery, law enforcement officials attacked them with clubs and tear gas as they crossed the Edmund Pettus Bridge; Lawrence symbolized the malicious and brutal attack by including the vicious dog at the left edge of the scene. Two days later, with court protection, Martin Luther King Jr. led now 25,000 marchers to Montgomery. Outraged by the barbarity of the civil rights struggle, the U.S. Congress passed and President Lyndon Johnson signed the Voting Rights Act later that year. Lawrence’s strong colors and compact composition relay the intensity and injustice of the violence inflicted on the peaceful protesters.”

Vicki Meek, via The Houston Chronicle:

“I have spent my creative energies reclaiming African American history in installations that both invoke memory and emotion. I have researched my community’s past hurts and slights, its horrors and abominations, its beauty marks and its warts, all with the purpose of making my audience face history without apology.” 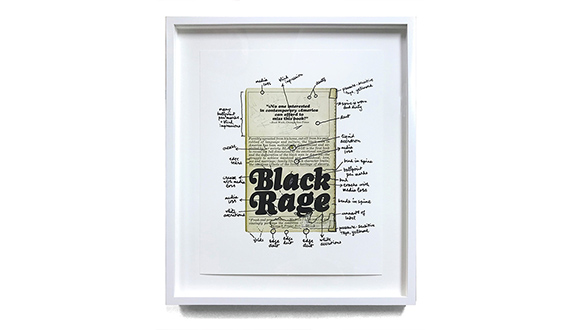 “Glenn Ligon (b. 1960) is an artist living and working in New York. Through his work he pursues an incisive exploration of American history, literature, and society across a body of work that builds critically on the legacies of modern painting and more recent conceptual art. He is best known for his text-based paintings, made since the late 1980s, which draw on the writings and speech of diverse figures including Jean Genet, Zora Neale Hurston, Gertrude Stein and Richard Pryor. He received a Bachelor of Arts from Wesleyan University and attended the Whitney Museum Independent Study Program. In 2011 the Whitney Museum of American Art held a mid-career retrospective of Ligon’s work, Glenn Ligon: America, organized by Scott Rothkopf, that traveled nationally.

“Important recent shows include Glenn Ligon: Encounters and Collisions (2015), a curatorial project organized with Nottingham Contemporary and Tate Liverpool, and Blue Black (2017), an exhibition Ligon curated at the Pulitzer Arts Foundation in St. Louis, inspired by the site-specific Ellsworth Kelly wall. Ligon has also been the subject of solo museum exhibitions at the Camden Arts Centre in London, the Power Plant in Toronto, the Walker Art Center in Minneapolis, and the Studio Museum in Harlem, among others. His work has been included in major international exhibitions, including the Venice Biennale (2015 and 1997), Berlin Biennal (2014), Istanbul Biennal (2011), Documenta XI (2002), and Gwangju Biennale (2000).” 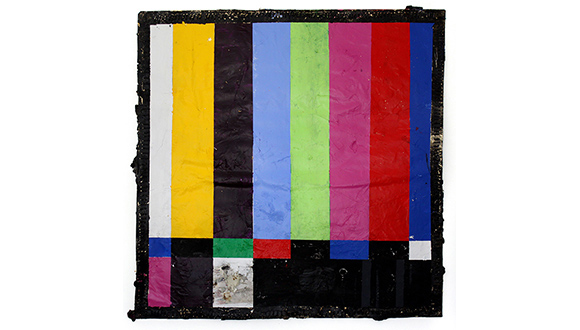 “Robert Hodge is an interdisciplinary artist whose practice explores themes of memory and commemoration. Born in Houston, Texas and raised in the City’s Third Ward district, the artist studied visual art at the Pratt Institute in New York and the Atlanta College of Art before returning to Houston. Hodge has exhibited his work in numerous national and international institutions. The artist has also received grants from the Joan Mitchell Foundation, Houston Arts Alliance and The Idea Fund. Hodge currently lives and works in Houston. Hodge’s current projects include an album he executive produced called Two and 1⁄2 years: A Musical Celebration to the Spirit of Juneteenth and his traveling installation called The Beauty Box.” 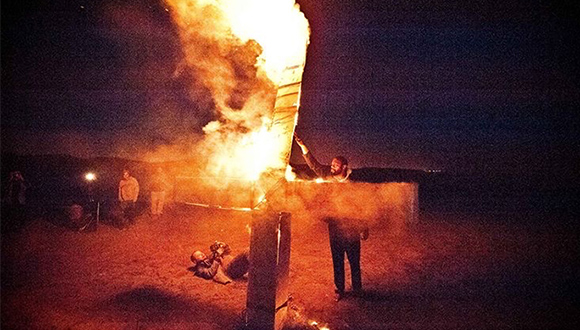 “The Jesus Projects look to expand the imagery around the story of Jesus. Through each iteration I increase the images of a black body in the role of Jesus as well as pinpoint specific locations that are analogous to the biblical accounts of Jesus. This is not a revolutionary action but a reassertion of the humanity of black people and Jesus. In this work, I’m not concerned with a religious experience or appealing to Christian values. As a nonpractitioner living in the bible belt the divisiveness of Christianity as it is represented in the political and social spheres do a disservice to the memory and sacrifice of Jesus. The United States is a country that espouses moral superiority to others and an exceptionalism to geopolitical realities, this work moves to dialogue with the contradictions the American way of life has presented. The historic oppression of minorities and women, the exploitation of the underprivileged, and the mistreatment of those seeking asylum all point towards a bleak vision of what the United States is about.” 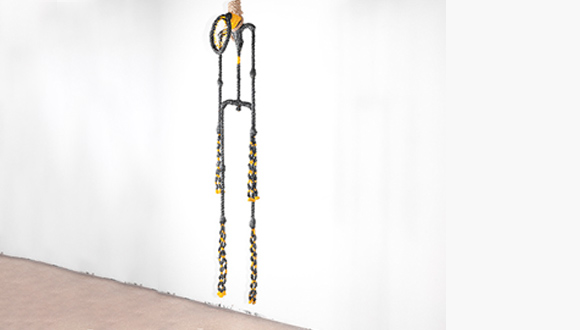 “In a time not so long ago, an alien spaceship crashed onto the planet Earth. The crew, upon coming into direct contact with the Earth’s atmosphere, turned into an inanimate object ― a piece of manila rope. Over time, Manila is coerced and framed to commit crimes against black people ― mainly in the form of lynching throughout the South. Manila can’t speak, has no agency and becomes a literal tool for white supremacy. Hundreds of years later, representatives from Manila’s home planet discover his atrocities and put him on trial. The alien justice system motto is ‘everything must be judged,’ and even though Manila is an inanimate object who can’t defend himself and is innocent of the crimes he is accused of, the aliens declare him guilty and sentence him to death by hanging with manila rope.” 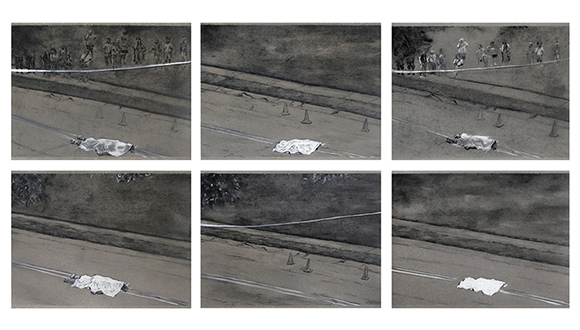 “Shaun Leonardo’s multidisciplinary work negotiates societal expectations of manhood, namely definitions surrounding black and brown masculinities, along with its notions of achievement, collective identity, and experience of failure. His performance practice, anchored by his work in Assembly — a diversion program for court-involved youth at the Brooklyn-based, non-profit Recess, is participatory and invested in a process of embodiment.

“Leonardo is a Brooklyn-based artist from Queens, New York City. He received his MFA from the San Francisco Art Institute, is a recipient of support from Creative Capital, Guggenheim Social Practice, Art for Justice and A Blade of Grass, and was recently profiled in the New York Times. His work has been featured at The Guggenheim Museum, the High Line, and New Museum, with a recent solo exhibition at Maryland Institute College of Art (MICA). From fall 2018 through spring 2020, Leonardo enacted socially engaged projects at Pratt Institute as the School of Art, Visiting Fellow.” 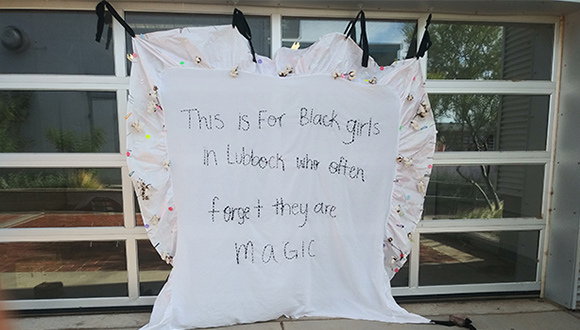 “The common thread running through my work is the similarities between the Black woman and that of practitioners of magic. In my installations and performance work, I experiment with the values and beliefs systems, along with the levels of persecution of the Black female community and that of witches, rootworkers, and shaman. I am influenced by the works of Betye Saar, Wangechi Mutu, and Renee Stout. The catalyst for my work is the Black Girl Magic movement, Beyonce’s  visual album Lemonade, Louisiana practitioner Marie Laveau and Tituba, an enslaved black woman of Salem first accused of witchcraft.”

Via the Albright Knox Museum:

“This small sculpture is part of a series of editioned works based on a maquette artist Kara Walker created while developing her Katastwóf Karavan, a wagon-mounted, fully functional calliope (a steam-powered musical instrument resembling an organ). The final work pipes a composition written by the American jazz pianist Jason Moran (born 1975) inspired by the songs and sounds associated with the long history of African American protest music. Walker originally designed the Katastwóf Karavan for Algiers Point in New Orleans, which was used as holding center for African captives before they were ferried across the river to be sold into a lifetime of slavery. The artist titled the work after the Haitian Creole word for ‘catastrophe’ as an allusion to the subjugation, violence, and humiliation of life for African Americans in the Antebellum South, silhouetted scenes from which in Walker’s distinctive style frame all four sides of the work.”

Letitia Huckaby, Not for Sale, 2020. Pigment Print on Cotton Fabric with Embroidery Hoop.

Letitia Huckaby, Not for Sale, 2020. Pigment Print on Cotton Fabric with Embroidery Hoop.

“The basic premise behind my work is faith, family and legacy. It is a time capsule for the African-American experience. I am always looking at how the past relates to the present, and whether or not things have changed or remain the same. There is always a history built into the pieces, whether through process or actual materials. I often use heirloom fabrics, and I think that is why so many people can relate to my work.”

“I am a photographer at heart, each piece starts with an image and progresses from there. The images are printed on cotton fabric, hand-stitched together into traditional African-American quilting patterns and finished as quilts, dresses, sacks or framed quilt tops. I love pushing the boundaries of photography, by using a traditional practice in an untraditional way and hopefully creating a new visual language.”