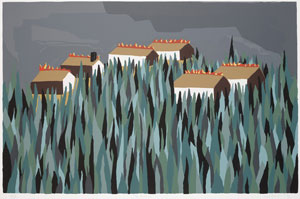 When Jacob Lawrence‘s biographical series about Haitian revolutionary hero Toussaint L’Ouverture was first shown in 1939 at the Baltimore Museum of Art, the 41 tempera paintings catapulted the twenty-one-year-old to national recognition. Almost half a century later he would launch into the L’Ouverture story all over again, selecting 15 images to reinterpret as an edition of silk-screen prints which he finished just three years before his death in 2000 at age 83. Now that another page has turned in the almost mythical history of Haiti, looking back seems particularly meaningful; not only on the original conflagration that was that country’s birth, but also on the flame it eventually kindled in the artist. We’re afforded that opportunity in the print exhibition, Jacob Lawrence: The Life of Toussaint L’Ouverture, at the Dallas Museum of Art.

The brilliant strategist who would one day earn, or claim, the name L’Ouverture (“the opening”) was born François Dominique Toussaint Bréda in 1743. Raised a slave on the Haitian plantation of his surname, he was educated, literate and by early adulthood, free. Due in part to his trusted position as carriage driver, he moved back and forth between the ebony and ivory worlds of the French colonists and their indentured workers, honing people skills that contributed significantly to Haiti becoming not only the first country in the Western Hemisphere to abolish slavery but also the world’s first black republic.

Using dramatic, cinematic perspectives, Lawrence constructs images from L’Ouverture’s life that could be storyboards for a war film. The titles alone, such as Strategy (1994), The March (1995), The Capture (1987) and To Preserve Their Freedom (1988), suggest themes of gallantry and tempt us to romanticize times that try men’s souls.

In The Burning (1997), angular tongues of flame lick up from valley rooftops. Lawrence seems to be surveying the scene from a prone position atop a mountain ridge, spying through blades of grass. The pointed tips of the grass echo the tips of the flames in the distance.

Perhaps the artist is suggesting the viewpoint of General L’Ouverture’s lieutenant, Henri Christophe, taking one last peek at the city he just torched to spite Napoleon’s invading troops. The year is 1802, the Revolution is at full boil, and Cap Français, called the “Paris of the Antilles” in L’Ouverture’s youth, is what’s cooking. 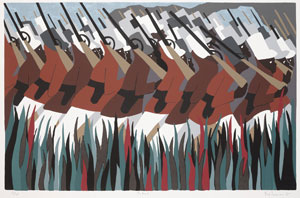 But why The Burning‘s forced perspective through tall grass? Certainly, idiosyncratic viewpoints are de rigueur for the sort of heroically overachieving biopic of which Lawrence made an early career. Still there may be a more thoughtful message implicit here, and throughout the exhibition.

Flames or the shapes of flames, sometimes cloaked in vegetal green, are prominent elements in almost every one of the 15 prints. In The Birth of Toussaint L’Ouverture (1986), these icons of revolution and change seem to watch expectantly, like the prophet Simeon, from just outside the window in the nativity. The same forms wave like red flags, warning of the blood and fire of battle in Strategy and The March. Including hues appropriated from the tri-colored French flag, the flames of Toussaint at Ennery (1989) and Contemplation (1993) whisper that there’s more Liberté Egalité Fraternité in L’Ouverture’s little finger than in all of France.

In addition to visually chronicling L’Ouverture’s life, Lawrence painted, and later printed, four other narrative series relating an African American history not taught in schools but which the artist unearthed on his own in the New York City Public Library. Three memorialized abolitionist legendaries John Brown, Frederick Douglass and Harriet Tubman. In 60 paintings, the fourth told the story of black migration from the rural South to the industrialized North during the first half of the twentieth century. Not just a demographic record, one painting bears the artist’s understated condemnation of the first diaspora in caption form: “In the North, the Negroes had freedom to vote.”

The conflagration imagery in Lawrence’s Haitian narrative encompasses two different paths of political action, one exemplified by Christophe’s violence in The Burning and the other by the statesmanly L’Ouverture of Contemplation. Given the artist’s vantage point at the time of the paintings, only decades after our own Civil War, a time when reactions to segregation threatened to boil over, it seems reasonable the young artist might have been philosophically musing on the relative wisdom of two strategies: Is it burn baby burn or wait for the right opening? 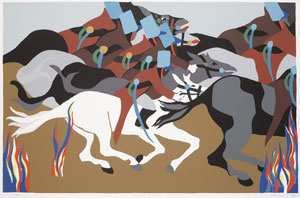 As it turned out, in the years that passed between his L’Ouverture paintings and his L’Ouverture prints, Lawrence saw the legacy of Christophe’s dramatic gestures. Rising to power after the Revolution, Christophe grew tyrannical, built historic Citadelle Laferrière and his own Xanadu, Sans Souci palace and in 1820 shot himself to avoid a military coup, legend has it with a silver bullet. And, like the bad seed, he inaugurated a long line of over-the-top Haitian dictators, culminating in the despotic Duvalier family that ruled Haiti from 1957 (with François “Papa Doc” Duvalier) until 1986 (son and successor, Jean-Claude “Baby Doc” Duvalier).

By contrast, though he died a seemingly ignominious death in a French prison before he could witness his country’s declaration of independence, L’Ouverture is most often credited for that eventuality. And despite Haiti’s long history of political turmoil, in 2003 his name would replace François Duvalier’s on the Toussaint Louverture International Airport in Port-au-Prince. Jacob Lawrence might have enjoyed the fact that the cooler head prevailed.

James Michael Starr is an assemblage and collage artist who lives in Dallas. He is represented there by Conduit Gallery and in Houston by Hooks-Epstein Galleries.

Gardar Eide Einarsson at the Modern