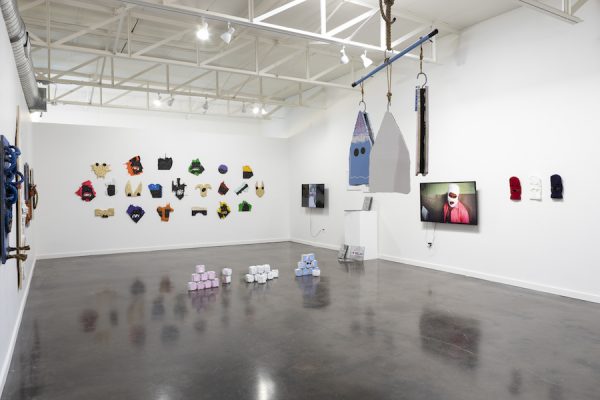 David Jeremiah’s first solo exhibition, Things Done Changed, shows the full breadth of work from the newly represented artist at The Public Trust in Dallas. Beyond the wall sculptures, fronted with pig snouts and shell casings and sloughed in tar, the Dallas artist’s single-channel video I Heart Micah is most positioned as a particularly Dallas story. 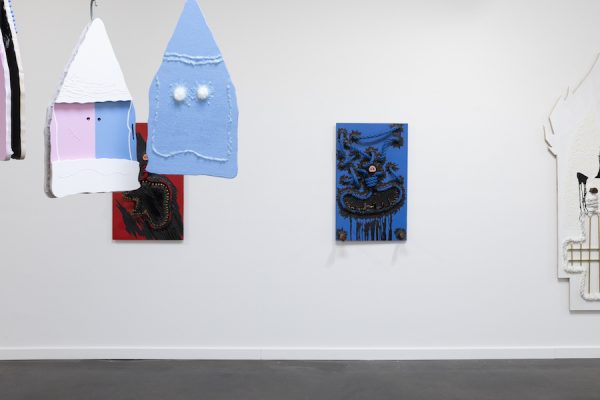 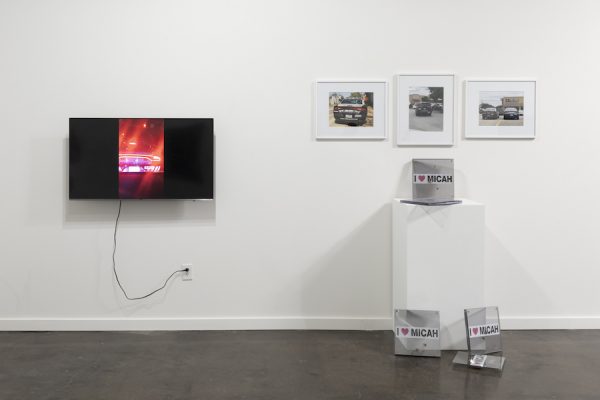 The video shows Jeremiah, in a nondescript parking lot, applying bumper stickers with the vacuous (though oddly specific) “I [heart] Micah” onto the rear bumper of a Dallas Police Department squad car. The following clips in the video are POV shots of a driver following police vehicles that have been affixed with the sticker: stalking in plain sight. 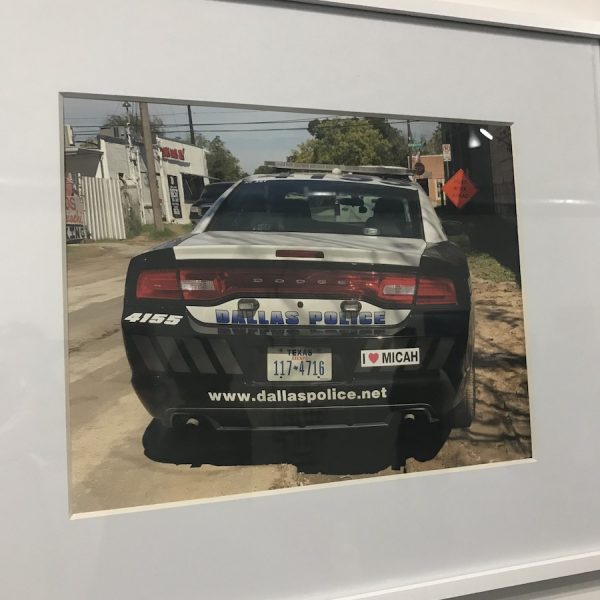 Here, Jeremiah enacts a kind of myth-making that follows the Black Lives Matter (BLM) and subsequent All Lives Matter movements, which the artist missed out on at their inception as he was in prison at the time. I Heart Micah takes the idea of such culture slogans and interferes with them, by placing a specific name — “Micah” — into the pathos. BLM’s slogan enunciates that race is a factor in oppression of a large group, whereas reactionary movements like All Lives Matter refute this and purport a post-racial reality. Jeremiah’s work doesn’t address this tension head-on; he instead plays with the mechanics of collective dialogue itself.

It’s media narrative, if you will. Jeremiah’s sticker, placed on police cruisers with the aplomb of branded merchandise, plucks its own narrative from the future. Public shooting events can sway wider culture. In I Heart Micah, Jeremiah is having his own reaction to an American massacre, which brings us to some questions about relations between police and the public. What if the police endorsed one individual, specifically? Wouldn’t we all want to know who “Micah” is? 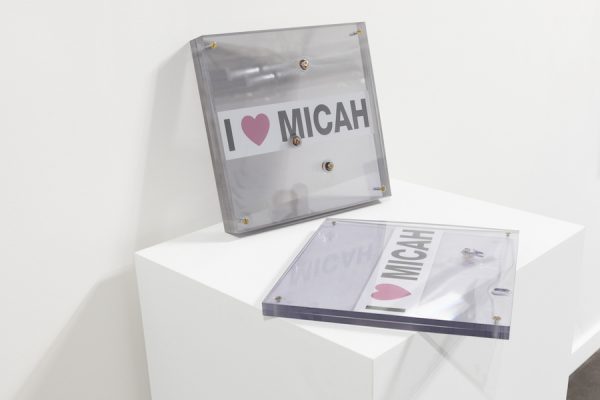 Micah, it turns out, is Micah Xavier Johnson, the shooter who killed five officers and injured nine others in downtown Dallas during a Black Lives Matter event in 2016. Johnson was cornered and killed by a police robot carrying an explosive. The video I Heart Micah, and the accompanying sculptures of the stickers encased in layers of bulletproof glass, imagine a time when the Dallas Police Department has fashioned its own slogan, thanking Johnson for showing them what black anger in the face of systemic abuse feels like. The sticker here represents a transparent admission of guilt, and by extension, compassion for those who the police have wrongly hurt. 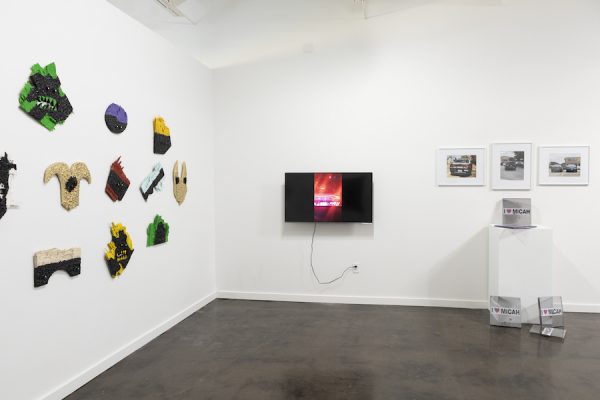 We may not need to stretch our imaginations to understand how police departments unpack events of public massacre, and how they navigate the public relations quagmire of signaling sadness to those in mourning. The Death of K-9 Cigo, by Emmanual Der Auwera, exhibited at Harlan Levey Projects in Belgium last October, is a collage of Periscope videos that followed the infamous Parkland High School shooting in 2018. Survivors of the event spawned a movement, March For Our Lives, and a slogan, “Never Again,” calling for conversation about gun reform to turn to action. The climax of Van Der Auwera’s crowdsourced documentary is a funeral procession for a Parkland Police Department dog that was felled in the line of duty soon after the school shooting. The police memorial for the dog was intended as a general display of respect in light of recent events; the department seemed to think it would be an appropriate response to the immense and disastrous loss the community faced, but the grandiose procession for a single animal feels eerie — earnest, but misplaced.

Jeremiah has made a number of works that reference his status as a formerly imprisoned person. As they say, write what you know. He’s forthright about what art is: it’s conversation. It is not the same thing as action or change. I Heart Micah proves that artists are creating the future all the time. Action is the next step.

Extended: On view at The Public Trust in Dallas through March 14

Fwiw, Micah, wounded and trapped, was blown up after 2 hours of negotiation.. Shortly afterward, I made a portrait of the robot: time:https://www.facebook.com/search/posts/?q=sniper%20wiper&epa=FILTERS&filters=eyJycF9hdXRob3IiOiJ7XCJuYW1lXCI6XCJhdXRob3JfbWVcIixcImFyZ3NcIjpcIlwifSJ9 .