Art And The Public Sphere: An Interview With lauren woods 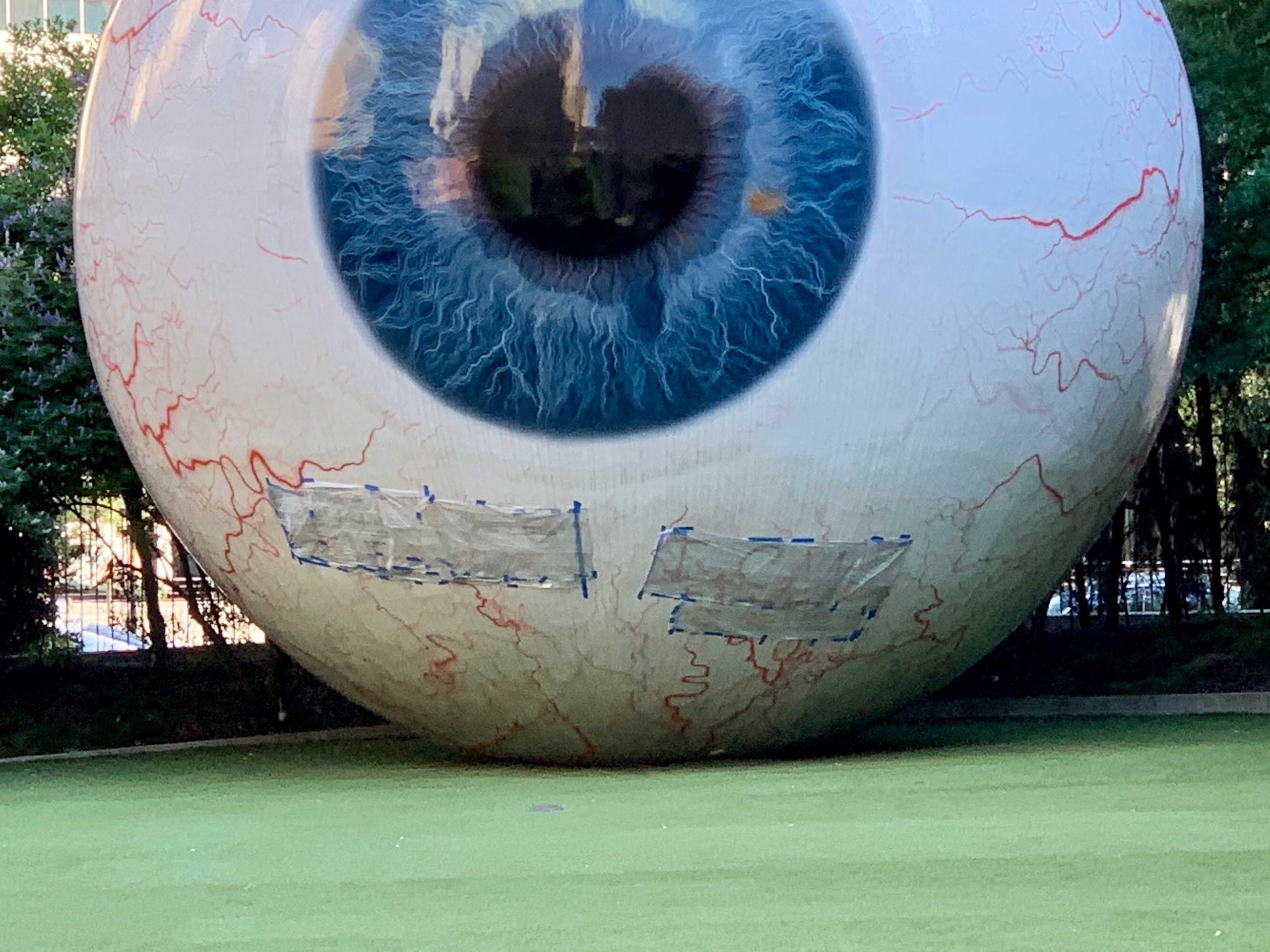 As news reports show us footage of  protests around the country (and the world), Texas has been no exception. What began as an assignment about the damage to Dallas-area Museums (and one prominently placed sculpture) turned into a longer conversation with artist lauren woods (spelled with lowercase letters), about intervention, inventiveness, and introspection.

“woods is a conceptual artist based in Dallas, Texas, whose hybrid media projects — film, video and sound installations, public interventions, and site-specific work — engage history as a lens by which to view the socio-politics of the present.”

We began our conversation about Tony Tasset’s “Eye” sculpture, and the artists response to the news about the work being spray-painted with the phrase “Now UC US GF.” In a story by Jeremy Hallock for the Dallas Morning News, Hallock revealed he was the one who broke the news to Tasset. Hallock writes, “I think most people in Dallas have embraced that piece.” Tasset said, in response to questions about the meaning of his work being subverted, or the sculpture possibly being targeted as a symbol of wealth: “I don’t want to say it’s an icon for the city, but people know it and it’s been reproduced quite a bit. It makes sense that it became a target for somebody wanting attention, and it’s working.”

Christopher Blay: lauren, I know you’ve made work, and other artists have made work, about the kind of police-involved killings that have led to the protests and demonstrations going on right now. I feel as if it is affecting people that may not have been affected in tangible ways before this, and I wanted to talk with you about that.

lauren woods: This is the issue, right? Artists have fucking problematic politics, right? You have a highly visible symbolic object in the public sphere, it got coopted in this really fucking important moment, and the least an artist can do as a maker of culture is stand in solidarity, and let the message speak.

CB: And that’s the defense of graffiti to begin with; You’re not giving me a choice about whether your message is visible to me or not in the public sphere, so the tag is just as violating as the giant mattress billboard.

lw: It’s not even a tag, though. A tag is the expression of an individual, right? It’s individuals putting their personal aesthetic out, writing their name onto public space. This writing on the eyeball really is an intervention, you know. It’s a drawing that literally spoke directly to the context of the original artwork. It wasn’t just expressing protest solidary — it literally spoke back to the artwork, which is “Now you see us” [Now UC US GF]. It was riffing off of the all seeing eye that invaded Dallas. I would argue that it shouldn’t be looked at as tagging or graffiti, but a political utterance that is actually really fucking smart. It’s an artful intervention in the truest sense, you know?  It is actually a new artwork.

And really, let’s dissect the possible meanings of the eyeball. A public plop art work, sanctioned by a real estate and oil billionaire on private property that appears as if it is public greenspace — it’s a massive an all-seeing bluest fucking eyeball. How can we not symbolically relate that back to the surveillance state? White supremacy? [laughs]  The intervention created on Friday night says to power, if only for a brief moment: You’re really gonna have to see us tonight, motherfucker.

CB: Yeah, it’s fenced-in, and it’s looking at us, but we don’t have access to it.

lw: Exactly. You have to have a ticket to the art fair Art Ball… .

CB: Which I’ve never gotten! I don’t know, I’m not on that list! Let’s talk about what went down in Dallas last night. The Crow Museum, The Nasher, and The Perot all got some damage during the protest.

lw: What’s interesting about the Nasher is, isn’t Xxavier’s piece up right now for Nasher Windows?

CB: It is, and I was thinking about that.

lw: It is unfortunate. I mean things were moving fast I am sure, on Saturday night, so it would be impossible for anyone to take time to understand what they were smashing into.  I haven’t seen it, but i know that from working with Xxavier at SMU, his practice has political undertones and for sure speaks to blackness, masculinity, and the contemporary and historical condition of being a Black man in the US to some degree…  among other things.

I also remember seeing messaging from the Nasher around the “timeliness” of the install as it related to current political events. I don’t know maybe if there was something more explicit in the windows that made it clear what the work was about; maybe it wouldn’t have been kicked in. [The Nasher’s public windows suffered minor damage and the window near a loading dock was more severely damaged. There was also graffiti on sidewalks outside the museum and the boards put up to protect the windows.] But then again, maybe the broken window may actually add to the read and meaning of the work. Detritus is a common material and aesthetic of his work. They should leave it.

As much as the Nasher is a beloved institution for artists in Dallas, it would be hard to make the case to a larger public making a statement against the status quo that it needs to somehow be protected during a rebellion. 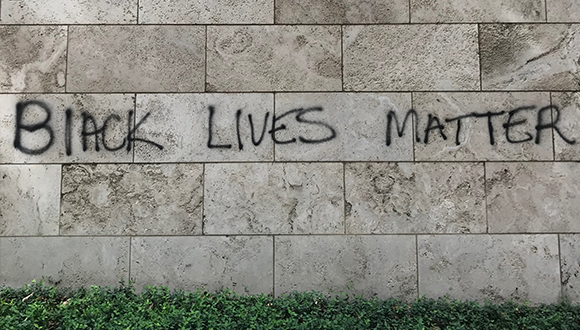 A wall of the Nasher Sculpture Center, with the phrase Black Lives Matter.

CB: That thought occurred to me, too. Are people standing around and saying, “Not this one,” or are they part of everything else on the block. No one’s standing in front of any museum saying…

lw: It’s really hard for museums to shake their history. “The museum” is always going to be a symbol of the elite and colonialist pillaging.

CB: So how are you holding up otherwise, with COVID-19 and being locked down?

lw: It’s really fucking crazy right now but, ahhh… I was just starting to pull myself out of  “pandemic hole” and now I’m back into, like, manic, rebellion, checking the news, and being on group texts and calls with multiple networks… sigh. One thing is for sure… I’m feeling really fucking inadequate as an artist right now… .

CB: I’ve had this conversation. It’s the Idea that we can’t be out there painting waterlilies while the country is in flames. I felt this even at the beginning of the pandemic. Why is anything else important right now, other than the most important things? Like how can you even make anything right now, and ignore what’s happening?

lw: Exactly. What I had my students do is — I just slashed the syllabus and I just said, “If you consider yourself an artist, you’re responding to what you’re in right now.” Be in the moment, you know. However that looks. Be present enough to be able to log the small and large shifts that’s in response to living in this crazy moment.

But one thing thats been really frustrating to me in the art world — particularly the academic art sphere — is how everyone is woefully talking about and writing think pieces about what it means to teach studio art remotely, and how you can’t give critique over Zoom, and how artists need studios, and paint or whatever, and I’m like: what the fuck are you talking about? First of all, who gives a fuck? We are in a pandemic. But second of all, if you’re really compelled to make, you make under the circumstances that you are in, and that becomes part of the work.

Response to the circumstances of life under quarantine during a global health crisis doesn’t have to be an explicit subject of the work — but either way, whether formally or through content, the circumstances will influence what gets produced. All artworks are a document of the moment in which it was made.

CB: Yes. Here are the parameters, and here is the environment, and here is what came out of it. You’re not waiting for the opportune moment. You make it in the moment that you’re in.

lw: For me, artists should be the people who have the best skill set in terms of flexibility and response. We should understand how to move right now, but people want to sit here and grieve a studio space or in-person crits or talk about art that has nothing to do with this shit right now. I’m just like… I can’t.

Our conversation at this point turned back to the eyeball.

lw: The longer that the eye can be there with the covering [plastic has been placed over the graffiti], that’s also interesting, like to have the eyeball injured. If the eyeball after this gets restored, then we’re missing an opportunity, right? 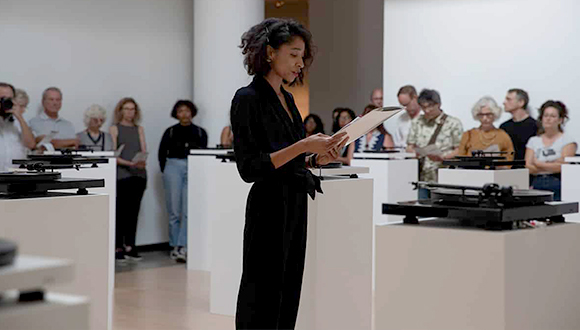 lauren woods is a conceptual artist based in Dallas, Texas, whose hybrid media projects — film, video and sound installations, public interventions, and site-specific work — engage history as a lens by which to view the socio-politics of the present. Challenging the tradition of documentary/ethnography as objective, she creates ethno-fictive documents that investigate invisible dynamics in society, remixing memory and imagining other possibilities. She also explores how traditional monument-making can be translated into new contemporary models of commemoration with new media.

Where did the eyeball photograph go that was originally published with this story as well as the Dallas museums damages story?

We could not secure the rights to the image, and decided to go with images equally relevant to the story.