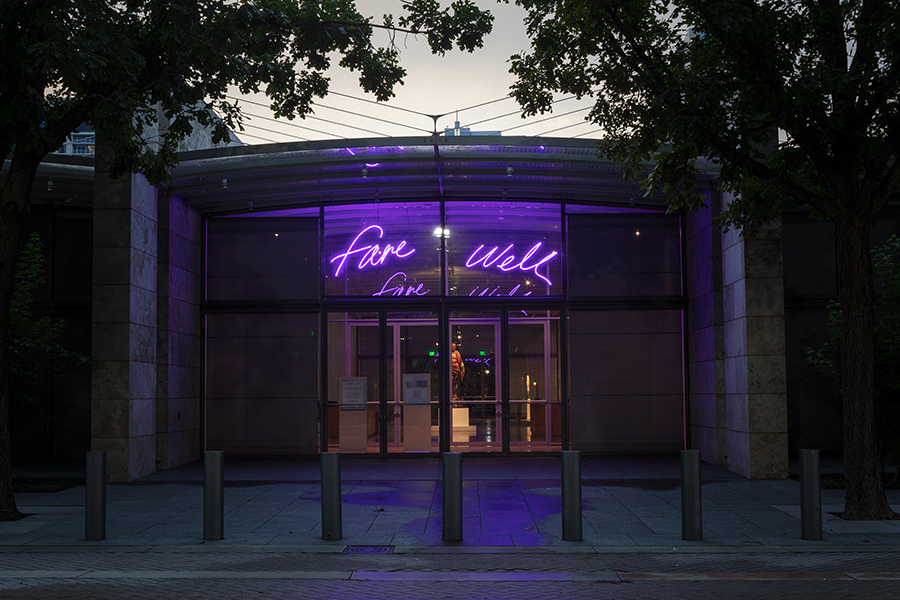 “fare well,” by Kristen Cochran, one of two acquisition by the Nasher Sculpture Center from the Nasher Windows series

For the past few months in Dallas, the Nasher Sculpture Center’s Nasher Windows series has featured works in the street-viewable front vestibule of the museum, engaging passers by with works from North Texas artists while the museum was closed to the public due to the Coronavirus pandemic. Although the museum is now open, the series has continued (through September 1), and two of the previously featured works, Start Livin in the New World by Xxavier Edward Carter, and fare well by Kristen Cochran,  have been acquired by the Nasher.

“We began Nasher Windows as way to continue showing art in the museum, even if from a distance, believing that it could serve as a balm to the city during this time of deep anxiety and isolation,” says Nasher Director Jeremy Strick. “The project has provided a platform for some of the best emerging and mid-career artists in North Texas, many of whom had exhibitions cancelled due to the shutdown, and we have been overwhelmed by the quality of the work by them, as well as the outpouring of appreciation for it by the public. These gifts to the museum of Carter’s and Cochran’s work are especially timely contributions to the collection, as each pay tribute to the experience of loss, and the growth and change that may come from it.” 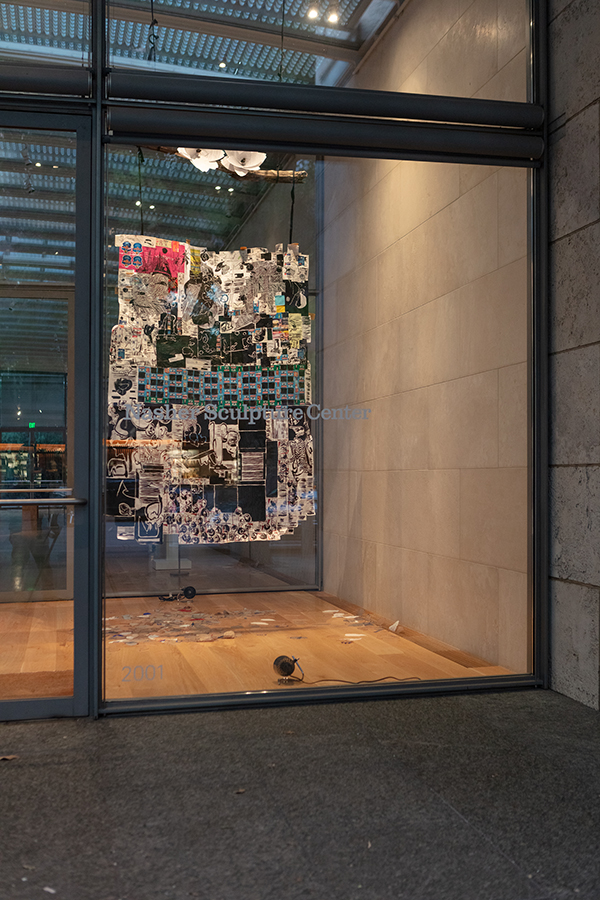 Xxavier E. Carter’s “Start Livin in a New World,” one of two acquisition by the Nasher Sculpture Center from its Nasher Windows series

Carter’s installation, with its title from The Roots song of the same name, was acquired as a gift of Nancy A. Nasher and David J. Haemisegger. The large paper tapestry that is at the center of New World  includes receipts, mail, federal paperwork, exhibition flyers, museum papers, and more, that were given to the artist.

“The scene created is a kind of terrarium or bonsai world of plastic, dead limbs, fake flowers, and a banner showing not only a journey in its material presence but a record of consumption, in other words the suburban dream,” Carter states. “This space surveils the viewer being set inside of the institutional glass façade of the Nasher Sculpture Center during a global pandemic, echoing the words of the song, ‘It ain’t nowhere to run, it ain’t hardly nowhere to hide,’ at a time where communities of color are being disproportionately affected by a crisis that is being exacerbated by the consumption of capitalist living and a government that continues to adhere to corporate safety and racial divisions rather than investing in the people.”

Cochran’s work, fare well, based on a smaller version for a show at Front/Space Gallery in Kansas City, was acquired through gifts from friends of the late Donald Fowler, the Nasher’s beloved Director of Retail, and address the concept of loss. The script of the sign was based on Fowler’s handwriting, “his final act of generosity and kindness was to ‘tag’ the [Nasher’s] façade with a grand and impish goodbye,”Cochran says.

Glasstire reached out to Cochran about the work, and in a text reply, she writes: “Language play and poetry has been a part of my work for a long time, but often more subtly in how a work is titled, for example. I wanted to use a subtle and intimate gesture on a grand scale to acknowledge loss and grief in a soft, hopeful and encouraging way, [one] that imagined the Nasher facade as a surface upon which Donald could ‘sign off’ -as if his passing was imbued with agency and even generosity.” 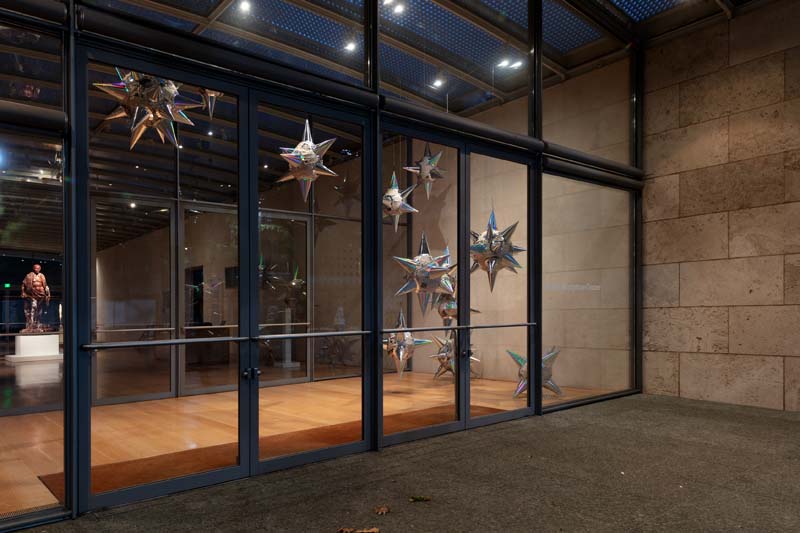 For more on the artists and the Nasher Sculpture Center, please go here.

Nasher Windows ran from May to September 2020 and was made possible by generous support from John W. Dayton, given in memory of Donald Fowler. Artist Sara Cardona is on view until September 1.

Kristen Cochran is an interdisciplinary artist living and working in Dallas. Originally from Portland, Oregon, she moved to Dallas in 2010 to complete her MFA. at Southern Methodist University. She has exhibited her work locally, nationally, and internationally and has been awarded residencies in Long Island City, NY; Mittersill, Austria; Banner, Wyoming; and The Center for Arts and Medicine at Baylor Hospital’s Sammons Center for Cancer Research, Dallas. Cochran has taught extensively at universities and museums in the Dallas-Fort Worth area, including The University of Texas at Dallas; The Nasher Sculpture Center; and The Modern Art Museum of Fort Worth. Recent exhibitions include chroma soma at Barry Whistler Gallery, Dallas; Fold In at Lawndale Arts Center, Houston; GOALS at the Stein Galleries, Wright State University, Dayton, Ohio; and Material Intension at ex ovo projects, Dallas. She will participate in the exhibition After Carolee: Tender & Fierce at Artpace, San Antonio and The NARS Foundation International Artist Residency in Brooklyn later this year.

Xxavier Edward Carter is a transdisciplinary artist born in Dallas, Texas with a BFA from Stanford University and an MFA from Southern Methodist University. His work is often presented as videos, publications, installations, and performances to encompass multi-sensorial, and layered circumstances encountered by the artist. Personal interactions, media bombardment, observed and lived experiences, and material excess/waste influence his work towards a complex revolutionary promise. These ecologically centered works are often heavily linked to the material history of currency in how it relates to the histories of marginalized people. Xxavier is of Black and Native American heritage and views his work as a continuation of the survival and storytelling practices of the cultures he was born into. He is interested in how these practices have their analogies across cultures worldwide. Stories of origins, the afterlife, superhuman beings, and of love and tragedy are the most compelling for him. Xxavier Edward Carter creates work dealing with what these stories mean in an often violent and oppressive context. His work bravely forges new ground by creating from the links of a chain that is often marked by the destructive history of humanity.