Artists Letitia and Sedrick Huckaby have announced the soft opening of Kinfolk House, a collaborative project space in Fort Worth’s Polytechnic Heights (Poly) neighborhood. The space is situated in a home that previously belonged to co-founder Sedrick Huckaby’s grandmother, Hallie Beatrice “Big Momma” Carpenter. Huckaby depicted Carpenter and her house in his 2007-08 series of paintings, Big Momma’s House. Now, Carpenter will serve as inspiration for Kinfolk House. According to a press release:

“[Carpenter’s] legacy is infused into every aspect of the space, most notably the conviction that creativity exists in many vastly different forms. Big Momma was a creative force in the lives of all who knew her. Although she wasn’t a traditional artist, she possessed a creative spirit that forged unlikely friendships and bridged interpersonal friction. After her passing in 2008, the house remained in the family. However, in 2010 Sedrick decided to purchase the home from his family. This choice became the catalyst for the idea of Kinfolk House.”

Kinfolk House will, according to the press release, be a “non-traditional space” that “prioritize[s] creative projects that leave room for collaboration and seek creativity outside preconceived notions of art.” It will serve as a gallery, community space, and education center — one that will “truly listen to the voices of Poly residents, taking into account their needs and wants.” The release also notes that Poly, and its Black and Latino residents, comprise a “historically underserved community.” 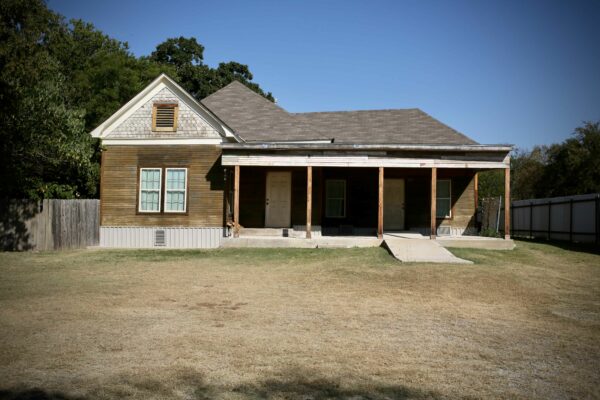 The founders of Kinfolk House have appointed Jessica Fuentes as the director of the project. Fuentes is an artist and educator who helped develop the C3 Visiting Artist Project at the Dallas Museum of Art, and later was Manager of School & Community Outreach for the Amon Carter Museum of American Art. “It is rare to have the opportunity to help build a space from the ground up that truly aligns with your personal vision and goals,” she said of her new position in a statement.

Prior to establishing Kinfolk House, Letitia and Sedrick Huckaby each achieved individual acclaim for their careers as artists. Sederick Huckaby’s paintings have earned him a Guggenheim fellowship, a Joan Mitchell Foundation Grant, an American Academy of Arts and Letters Award, and a Lewis Comfort Tiffany Award. He was also a Texas State Artist for 2018. His works, including a portrait from life of his painting student, President George W. Bush, are currently on display in a solo exhibition at the Blanton Museum of Art in Austin.

Letitia Huckaby is a photographer with work in the collections of the Library of Congress, the Art Museum of Southeast Texas, and the Samella Lewis Contemporary Art Collection at Scripps College. Her solo exhibition Beautiful Blackness was the subject of a Glasstire Five-Minute Tour last year, and earlier this year one of her large-scale photo installations was acquired and subsequently exhibited by the McNay Art Museum in San Antonio. Regarding Kinfolk House, she said in the press release she hopes it “will be an artistic light that the community will be proud to have.”

The Huckabys have also been noted for their previous collaborative projects. In June of 2020 they designed and executed a mural that proclaimed “END RACISM NOW” on Fort Worth’s Main Street. Just before that, they were interviewed for Glasstire by Christopher Blay about their upcoming and ongoing projects. Now, they will collaborate on a mixed-media project for the grand opening of Kinfolk House, which is planned for February 2022.

Until then, more information may be found by visiting the Kinfolk House website.