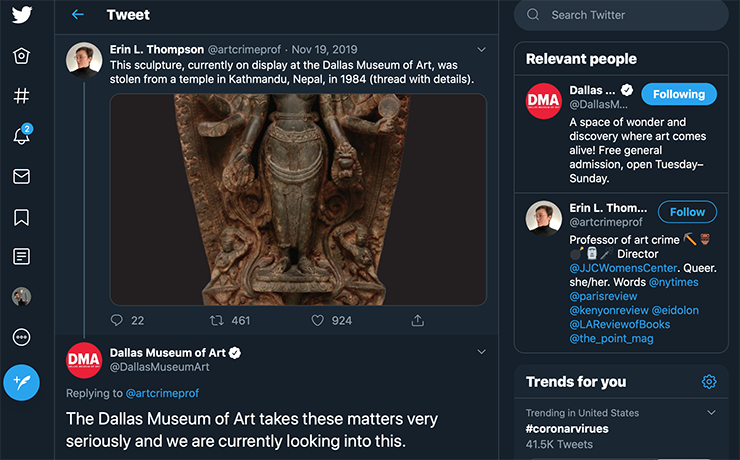 Screenshot of Erin L. Thompson’s tweet about a sculpture listed as stolen, which appeared in a Dallas Museum of Art Exhibit.

Erin L. Thompson, Associate Professor of Art Crime at John Jay College of Criminal Justice (CUNY), penned an article last Friday, January 24 in Hyperallergic stating that the Lakshmi-Narayana (elsewhere described as Vasudeva-kamalaja) statue, on long-term loan to the Dallas Museum of Art (DMA), is a stolen artifact from Nepal.

No stranger to the reality that pieces like these could be in its encyclopedic collection or on loan, the DMA has previously returned works to their home countries: Turkey, in 2012, as well as some Greek and Etruscan pieces the following year. The DMA is not alone in this.

Thompson’s article breaks down the DMA story like this: Artist Joy Lynn Davis, who paints photorealistic images of stolen deities from Nepal, did an image search of the Lakshmi-Narayana after it was highlighted by Nepali writer and activist Kanak Mani Dixit as one that meant the most to him. Her Google image search flagged the statue (which Davis knew had been stolen from a temple in Kathmandu in 1984) in a blog post featuring works at the DMA. The statue was on view around November 2019, and was removed from view in December, after Thompson’s twitter post (see pic at top).

Thompson revealed in her article, and in an interview with Glasstire, that the statue had been put on long-term loan at the DMA dating back to 1990. It had been purchased that same year at Sotheby’s New York on March 22 by a collector named David T. Owsley, “a prominent collector of antiquities and long-time patron of the Dallas Art Museum.”

In her interview with Glasstire, Thompson stated: “My larger concern, which I hope comes through in my article, is that there could be so many more sacred sculptures stolen from Nepal, or antiquities in American Museums where we don’t happen to have this clear of evidence of theft.” She continues: “And we need to as museums do better in trying to figure out where the objects come from. The Metropolitan Museum of Art last year had to give back a golden sarcophagus from Egypt because they bought it with faked passport paperwork.” 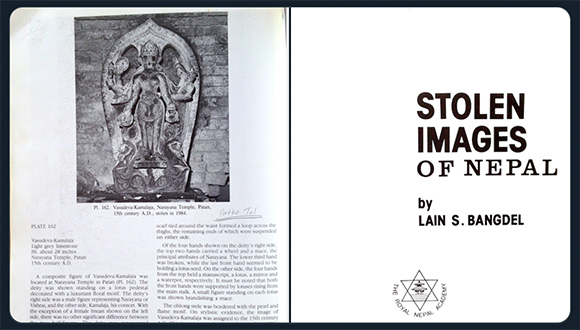 “Most reputable American museums belong to either the American Association of Museums or the American Association of Museum Directors, which have guidelines to regulate new acquisitions of antiquities,” Thompson states. (The new guidelines were enacted in 2008.) And while those regulations prohibit new acquisitions of questionable provenance, museums don’t have to scrutinize works in their collections or on loan that predate the guidelines. “Museums are in charge of deciding whether or not they have enough paperwork to satisfy that requirement, so there’s nobody looking over their shoulders.”

For its part, the DMA responded on twitter, promising an investigation. In a statement released to Glasstire on January 28, the DMA states that the sculpture has since been removed from exhibition, and the museum is indeed investigating.

As soon as the DMA was made aware of the recent information with respect to the stele, the Museum began an internal review and research of the object, which was on loan to the DMA from a private collection. The DMA has removed the stele from display while we work with the lender to gather additional information and determine an appropriate and responsible course of action.

Flower of the iPad: Geroge Grosz in Dallas:...