“A Grain in the Eye of the Mountain” at Fundación MARSO 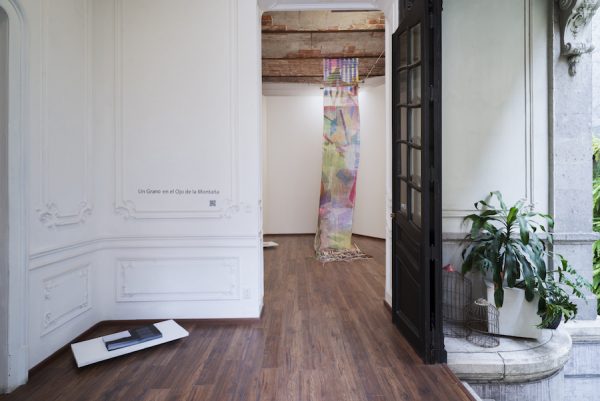 Installation view of A Grain in the Eye of the Mountain, at Fundación MARSO, Mexico City. Image: Fabiola Menchelli

“Let’s do a show together.” What does it mean to collaborate in the art world — an intricate fabric held together by the power dynamics that exist between its distinct agents? What do artists, curators, gallerists, collectors and critics expect from each other? In the end it comes down to a matter of how we chose to build links as artistic partakers.

More so, where does the border lie between one artist and another within the context of a group show? And between artist and curator? Work partnerships and roles are recomposed in the exhibition A Grain in the Eye of the Mountain, a collaboration between Daniela Libertad, Fabiola Menchelli, and Leslie Moody Castro at Fundación MARSO, a non-profit contemporary art initiative in the emblematic Juárez neighborhood in Mexico City.

Moody Castro — who usually acts as curator — approaches this show from an unfamiliar angle. In this case her curatorial contribution permeates the membrane that divides maker and cultural promoter and becomes part of the actual oeuvre of the exhibition. As with any other show, Moody Castro writes a text, except that on this occasion it is quite sui generis since the written piece acts as an actual artwork in the exhibition. 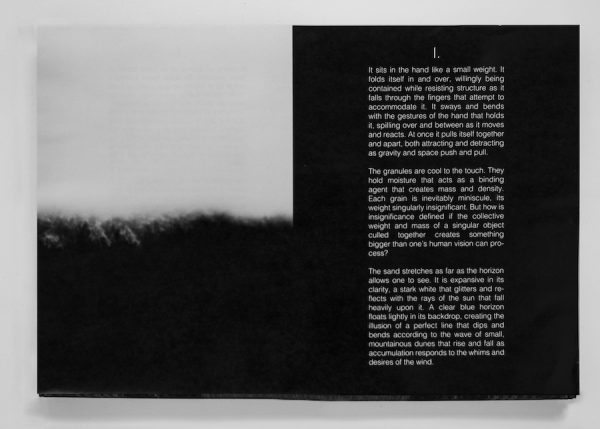 Moody Castro’s text does not delve into Libertad’s and Menchelli’s artistic practices in an overt or conventional manner. Rather, it is a poetic composition that captures the essence and energy of the extensive exchange the three of them had in the months prior to the show. As a result, Libertad and Menchelli created works that emerge from the conversations they were having and eventually from Moody Castro’s written piece. Thus, the works made for the exhibition, more than being site-specific, became conversation-specific. An example of this in Libertad’s and Menchelli’s production is the hefty influence (conceptually and formally) of the notion of the horizon, present in Moody Castro’s text. 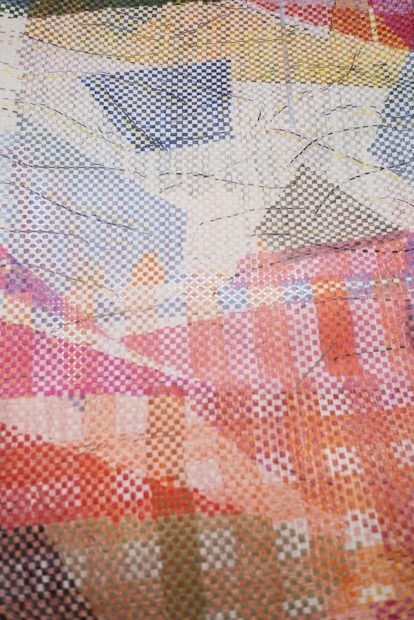 In the first room of the show Libertad presents a work titled Dibujo tejido 2 (Woven Drawing 2, 2019), the second piece in a series in which she cuts color pencil drawings into strips that she later weaves together to create elaborate and alluring structures. Libertad dismantles an image to erect a new one. Because of the way the weaving is assembled, her first “woven drawing” (not in the exhibition) was executed in terms of a horizontal-vertical horizon and was hung on the wall. Yet, subsequent to her conversations with Menchelli and Moody Castro, Libertad began to question what lies behind the drawing, and to comprehend the horizon in terms of both front and back. This materialized in Dibujo tejido 2, a 20-foot-high floor-to-ceiling work for which she drew on both sides of the paper and consequently displayed it separated from the wall, allowing the viewer to walk around it.

As I stand before Libertad’s Dibujo tejido 2, I read the first excerpt in Moody Castro’s text in which she narrates the sensation of holding a clump of sand while standing in a desert, watching the horizon between the sky and the land disappear. Each square shape produced by Libertad’s weaving could well be a grain of sand in the desert where Moody Castro stood a few months back. In these hazed horizons one loses sight of space; vertigo takes over. 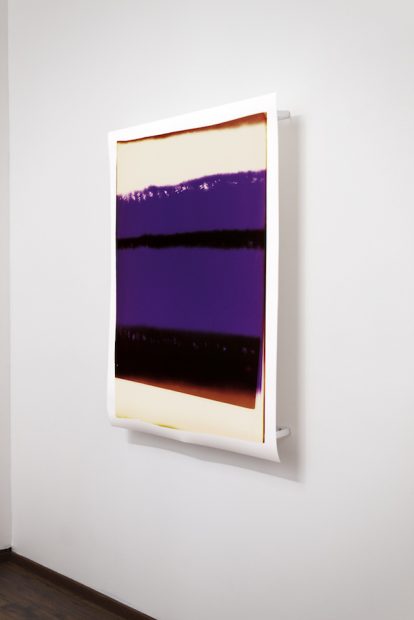 Hung on a well next to that work of Libertad’s is Horizon II (2019), one of Menchelli’s photographs composed of a series of uneven orange, ivory, purple and black horizontal fields. In a photograph that seeks to capture a rendition of the world, the horizon is delineated by a natural or manmade marker (a mountain or a cityscape for example), but the multiple horizons in Menchelli’s photograph were created by the linear impression that the velvet border on a 35-mm film canister makes on the black-and-white negative when it is first pulled out of the container — color emerges afterward in the dark room, where Menchelli overlaps the film with hued filters to build these polychromatic exposures. Menchelli spent hours and hours arranging these compositions in complete darkness. How serendipitous that in a section of of Moody Castro’s written work, she touches on the relationship between lightness and darkness. One is, after all, contingent on the other. 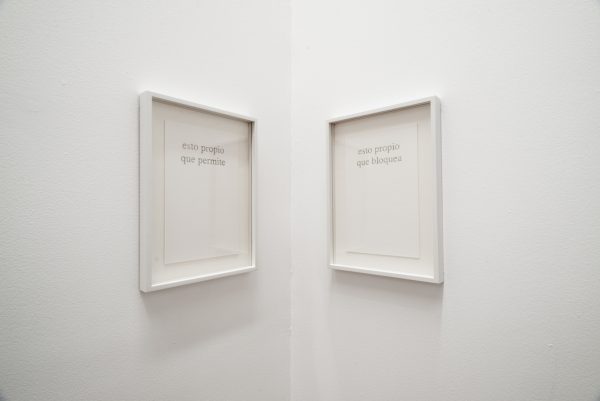 Libertad, Menchelli and Moody Castro not only restructure the roles they play in the making of the show, but they also unfurl the medium, and persistently inhabit the in-between. Even though Libertad thinks through drawing, Menchelli through photography, and Moody Castro through writing, they challenge the containers of their respective mediums and constantly defy their gravity. In an attempt to understand the makeup of the image, they engage in a process of deconstruction and construction.

In some cases, such as with Dibujo tejido 2, Libertad’s drawings become sculptures. But sometimes, as with her works from the series Del poder de las palabras (About the Power of Words), her drawings turn into actual written words. Menchelli draws with light; her photographs could well be Rothko paintings. Moody Castro’s written work acquires materiality as it is presented in the form of lustrously printed posters stacked together on a white scaffold a few inches high. Text becomes object — an object the viewer can take and carry with them. 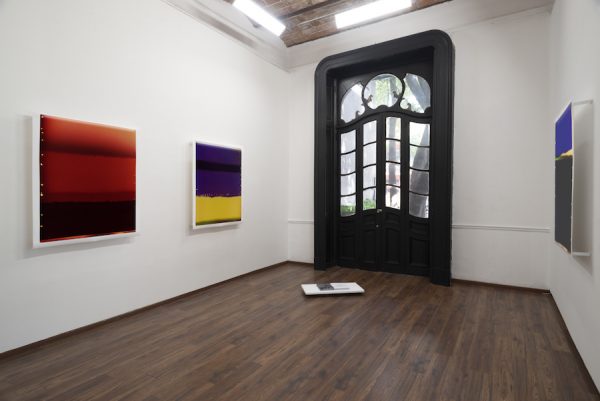 Installation view of A Grain in the Eye of the Mountain, at Fundación MARSO, Mexico City. Image: Fabiola Menchelli

All of this is happening within the microcosmos of A Grain in the Eye of the Mountain. It’s a vessel constantly unfolding and reconfiguring itself as it attempts to contain the uncontainable. Things always slip, yet we still try to cling to a cluster of sand when we go to the beach, tackle materials and ideas in the studio every day, and even set out to put into words what art can do. Why? Regardless of the futility, we know that in the attempt, something does happen.

On view at Fundación MARSO, Mexico City through Jan. 20.