Safe as Texas in Texas? ‘Words/Matter’ at the Blanton

by Lauren Lluveras May 20, 2019
FacebookTwitterEmail 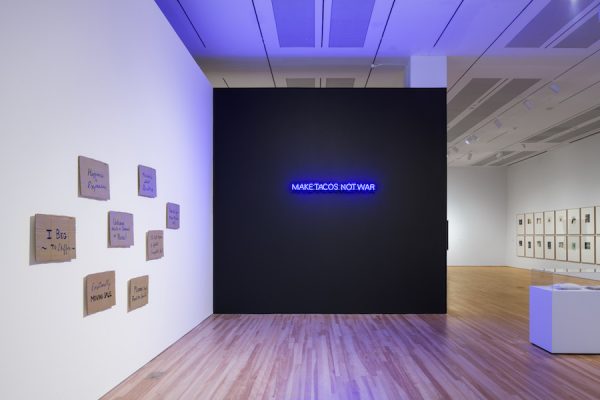 Installation View of Words/Matter: Latin American Art and Language at the Blanton
at the Blanton Museum of Art, The University of Texas at Austin. Center: Alejandro Diaz, Make Tacos not War [Haga tacos, no la guerra], 2007. Neon. Left: works by Alejandro Diaz

There’s a line in David Shapiro’s poem To the Earth that reads: “When we fell, we screamed/But we were safe in Texas, safe as Texas, safe/as Texas in Texas.” That poem describes a man travelling through space with his father, and is the inspiration for a beautiful and dizzying painting by Miguel Angel Rios titled Caí con mi padre por el espacio, enamorado locamente de la Tierra II (I Fell with My Father Through Space, Madly in Love with the Earth II). The travellers in the poem who hoped to find haven in Texas remind me of asylum seekers who, fleeing violence in their home countries, began a months-long march to the United States in the fall of 2018. Upon nearing the southern US border, the painful truth is that many were met with tear gas and detained by armed vigilante militias. 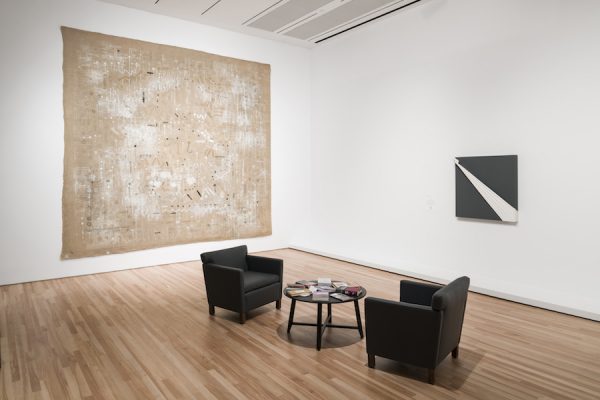 Rios’ painting is part of the Blanton Museum of Art’s current exhibition Words/Matter, on view in Austin. Though the primary function of the exhibition is to explore the use of written language within modern and contemporary Latin American and Latinx art, there’s another narrative happening as well — one that offers viewers an opportunity to consider the relationship between the United States and people of the Latino diaspora, particularly immigrants. 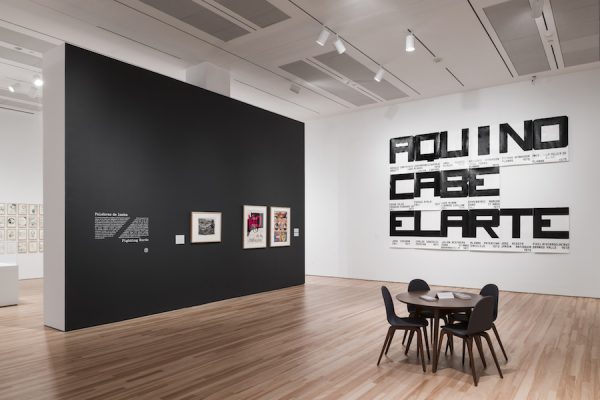 Installation View of Words/Matter: Latin American Art and Language at the Blanton. Back wall: Antonio Caro, Aquí no cabe el arte [Art Does Not Fit Here], 1972-2014. Acrylic with pencil on sixteen sheets

In the exhibition, two gold teacups — one bearing the word “tu” and the other the word “yo” — are connected by a gold chain, speaking to the impenetrable bonds between separated bodies. In the context of Words/Matter, Valeska Soares’ teacups operate as surrogates for the estimated 3,000 immigrant children separated from their parents at the Southern US border — hundreds of whom are considered lost. A second work of Soares’ — a set of polished steel sheets inscribed in reverse with excerpts from Invisible Cities by Italo Calvino — once created a conceptual opening in the fence bordering Playas de Tijuana in Mexico and San Ysidro, California. Invisible Cities argues that any two cities in the world are joined by a shared reality such that to describe one city is necessarily to say something about the other. With this work, Soares allows viewers to consider our shared reality with our neighbors on the other side of the border and, perhaps, to see ourselves from their perspective. 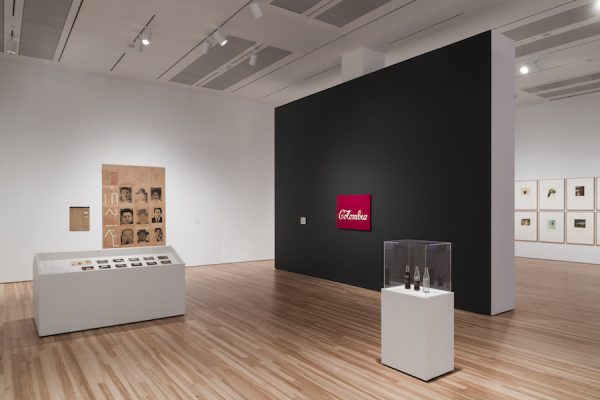 The opportunity to see ourselves, as Americans, from a new lens is carried forward in Cildo Meireles’ Interções em Circuitos Ideolõgicos: Projeto Coca-Cola (Insertions into Ideological Circuits: Coca Cola Project) in which the phrase “Yankees go home” was adhered to Coca-Cola bottles, the text illegible until the bottles were recycled and refilled. Similarly, Enrique Chagoya’s zine-like Abenteur der Kannibalen Bioetheicists’ (Adventure of Cannibal Bioethicists) pokes fun at Western stereotypes about Latin American culture. One panel depicts a stereotype of an indigenous Mexican at a fine-restaurant, dining on the disassembled body parts of a white man. In another, a member of the KKK must navigate a maze to avoid racist caricatures of Mexican, Black and Asian men in order to save a white woman, playfully tying these cliches back to their white-supremacist roots. 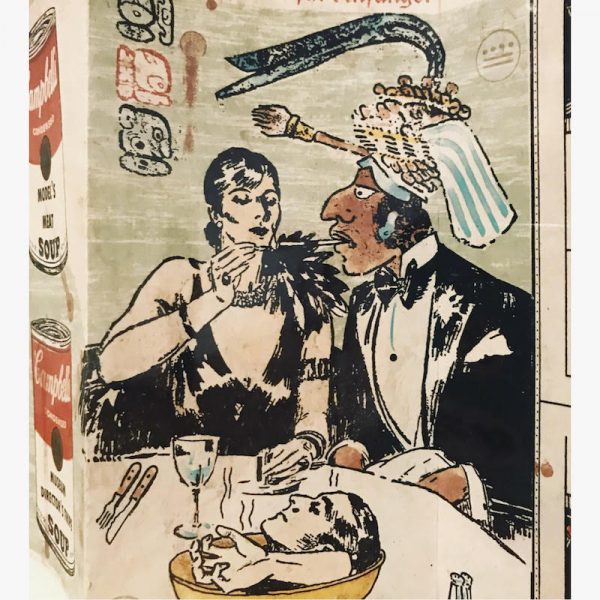 Many of the works in Words/Matter take on issues of borders, racism and detainment in ways that are irreverent and light, and though it’s unlikely that all of these artists had the contentious relationship between the Trump administration and Latinos in mind when making the work, the exhibition does act as a repudiation to the intolerant messages coming out of the White House today regarding American identity. After all, President Trump and his administration are yet still in the midst of attempting and succeeding to stoke paranoia, confusion and despair among American citizens (and would-be citizens), most especially around issues of immigration, race, and our borders. 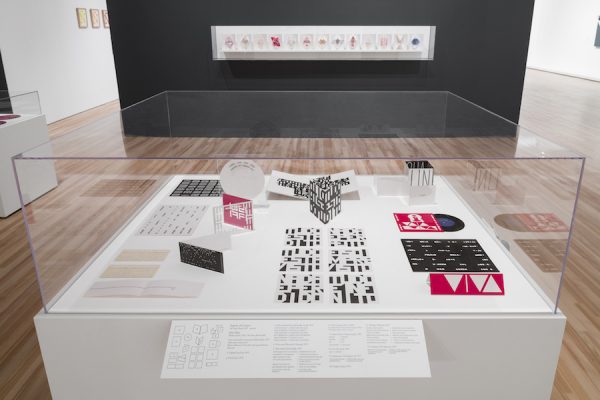 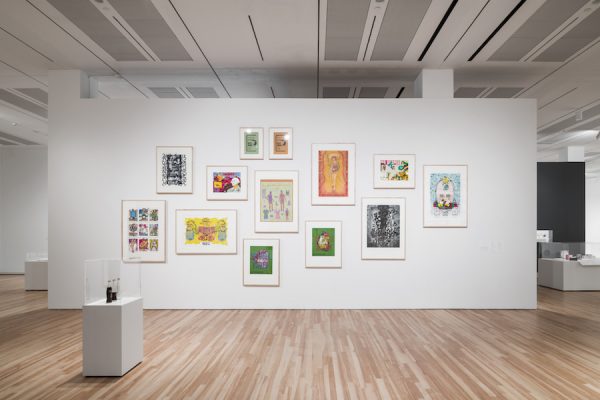 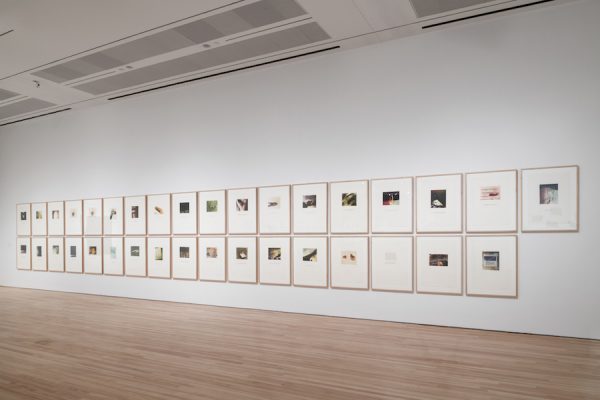 On that note: upon exiting the Blanton, look to your left and you’ll see the state capitol building. As far as Words/Matter goes, its proximity to our state lawmakers is a coincidence, but it’s also an occasion to consider the exhibition’s works in relation to past, current and shifting American policy. The United States has had a hand in destabilizing Latin American economies and governments, such that some have argued that the asylum seekers wouldn’t have to leave their homelands were it not for U.S. interference. It’s an appropriate time to consider what arriving “safe as Texas in Texas” means for families, before they were and are sent to detainment camps across our state.