by Brandon Zech May 15, 2019
FacebookTwitterEmail 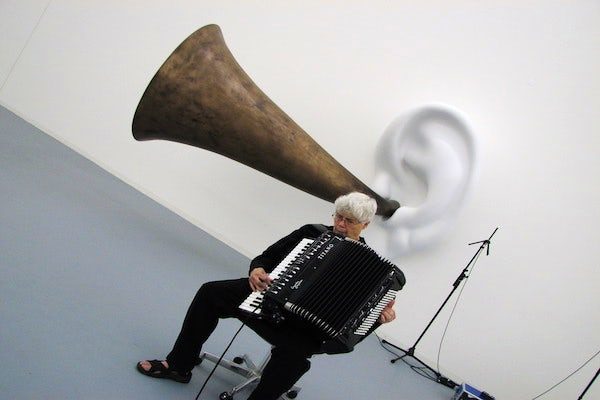 This month, organizations and individuals in Houston are hosting events in remembrance of the legendary artist and composer Pauline Oliveros. Born in Houston in 1932, Ms. Oliveros was a critical figure in the developing experimental music movement of the 1950s. After leaving her studies at the University of Houston unfinished, Ms. Oliveros moved to California and graduated from San Francisco State College in 1957. While in the San Francisco, she met other experimental music pioneers, including Terry Riley, Steve Reich, and Loren Rush.

Throughout her career, Ms. Oliveros was always connected in some way to Texas. She returned to the state to perform her various compositions, and in 1986 served as the artistic advisor of New Music America, a traveling festival that was, in that year, held in Houston. In Ms. Oliveros’ obituary on Glasstire (she died in 2016), Rainey Knudson wrote of a particular anecdote from that festival:

“During the festival, it was the tradition that the organizing composer would perform a signature work of their own. Oliveros did not want to perform anything, and only after general manager Jerry McCathern insisted did she give in. She performed her 1970 piece “This is a Short Piece” in the Brown Auditorium at the Museum of Fine Arts, Houston, directly following John Cage’s performance in the museum’s sculpture garden.

For the piece, she walked on stage, announced “this is a short piece,” stamped her foot, and walked off.”

Ms. Oliveros was a proponent of deep listening — a continuous process of attentive listening to the sounds happening in the world. In an interview for American Public Media, she described the process as “listening to everything all the time and reminding yourself when you’re not listening.”

And on May 25, Studio Enertia, led by Ms. Harris, and Discovery Green are partnering to present Pauline Oliveros Day, featuring performances of Ms. Oliveros’ compositions, and artist-led listening meditations. This program is the first installment of Houston Arts Pioneers, a program aimed at honoring the influence of Houston artists.

Update, May 17, 2019: Houston organizations Nameless Sound and Lawndale Art Center are collaborating on a third event featuring a performance of Ms. Oliveros’ 1998 Sound Piece. Scheduled for May 27, from 7:30-9:30 PM, the event is part of the organizations’ weekly experimental music They, Who Sound series. A bit more about the performance is below, via Lawndale.

“The 1998 text-based score will be performed throughout Lawndale’s galleries by an ensemble of local and regional artists. Audience members are encouraged to move freely throughout the space since there will be no seating for this final event of the season.”