The Anxiety of Self-Presentation: Memory by Lisa E. Harris

It was a good time. It was the best time. It seemed like such a short time, but such a good time – a go-o-o-d time!

I waited uncomfortably at Fresh Arts’ Winter Street Gallery as I listened to the vaguely familiar voice of Liza Minnelli, which felt like a memory. Why do I always arrive too early? It was hard to tell if the performance had started. It had.

Time passed awkwardly; it was hard to tell where to stand “to see it.” The room was arranged in such a way that you had to bump into people a bit to get around a few obstacles — the brightly lit vanity with its arrangement of makeup tubes, a wall of “selfies.” I settled on a spot against the wall by the baby grand piano, where a small group of people was clustered around one of the only seats in the room. The performance had started, but we were not fully aware.

All alone in the moonlight. I can dream of the old days. Life was beautiful then. I remember the time I knew what happiness was. . . 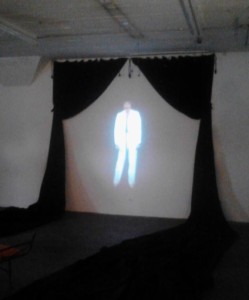 The video that dominated the space flickered like the unconscious of the exhibition: first Liza belting it out alone on a giant stage, then a young Lisa E. Harris on a small crowded stage with other children in costumes, and then a blond girl in a spotlight.  Shrouded by long, campy velvet curtains, one could imagine connections between Harris’s work and the fiery, media savvy, humorous, explicit performance acts of the late 1970s and 80s. The set design and film, along with the Jungian diagram of  “the alienated ego” scrawled on the floor, made the performance a bit too literal. You could tell without much effort that the artist was investigating the psychology of “the performer,” a role she had been playing since the age of eight. 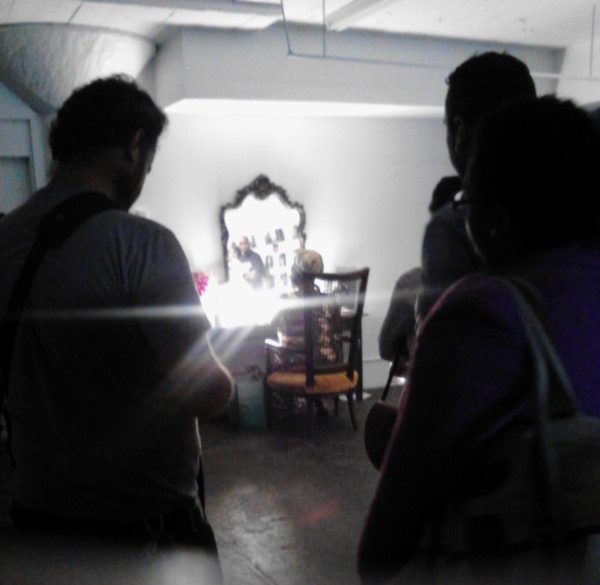 Now the artist is in the room, so we’re about to start, right? Harris arranged a bag of things by the vanity. Was I supposed to be paying attention to this part? Then she walked over to the piano, after motioning to a woman with a clipboard that the video should be muted now. She asked the man seated on the piano bench to get up. This is where the performance would start. Or, were we already in it? She began to play. False start; missed a note. Start again. She mumbled to herself.

Wait, were we supposed to be hearing this? Was this the performance?

What followed were a series of negotiations between the artist and her psyche, as she talked herself into and out of and back into readiness for performance. The performance on Friday night was a performance of rehearsal. It was awkward and uncomfortable; one had to shift around quite a bit as she moved from piano to dressing table and back again.

At the dressing table, Harris faced her self and her anxieties in the mirror, along with the audience’s reflection, flattening the performance momentarily into an image: the audience in the background of the performer’s psychological investigations. After a few minutes at the mirror, (a passage of the performance that recalled for me early feminist video art and its critique of social expectations of women’s self-presentation), Harris stepped behind a curtain to change clothes.

She returned to the mirror and began to apply clownish robot cat paint to her cheeks and forehead, when her mother, watching from the back of the room, threaded through the other spectators to quickly tuck in the tag of Harris’s dress that was sticking out.

Did that just happen? Everyone laughed awkwardly. But that was it. That was the heart of the performance in one perfect, inconceivable, totally unscripted gesture. In this moment, the performance came together as something more than an image or a series of acts. In the quick pat to the back of her mother’s hand and the shy blush as Harris caught her reflection in the mirror were all the hopes, pressures, expectations, anxieties, fears, and love that the artist had been miming up until this point. Her mother, as spectator and as someone intimately connected to the artist, was compelled to act on the discomfort the artist made all of us feel. Harris’s performance worked at a deeper level. It wasn’t just about her psychology; everyone in the room was implicated in an analysis of our frontstage and backstage self-presentations – this underlying theme accounted for and intensified the discomfort of having not known when the performance began.

“Five minutes, Ms. Harris.” from the woman with the clipboard. 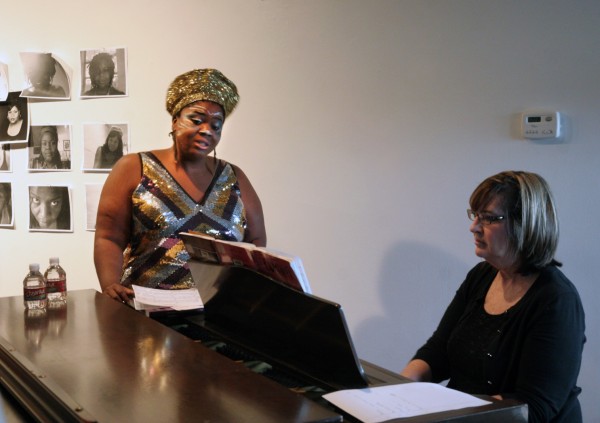 Harris returned to the piano, with an accompanist now, whom she seemed to pluck casually from the audience standing around – once again, it was difficult to tell where performance started and stopped. Harris stood and sang. As her voice filled the room, the awkwardness faded. As the actual rehearsal began, the performance drew to a close. Smiles crept over a few faces in the audience. The cell phone camera brigade fired away and we stood there watching ourselves watching and listening attentively as Harris warmed up her voice and warmed the room. Even though you could feel that it was almost over, the performance continued to stutter as it had from the start; she paused to have water, to start again from the top, to wait for a passing train outside, and to ask the accompanist if she liked her makeup, voice teetering a little with nervous laughter: “Does it look like me?”

No Matter How Hard I Try I Can’t Look The Same As I Did Yesterday is on view until September 27. Harris’s second performance, Being Alive, will take place Friday, September 20 at 6 pm.

Harris explained her exhibition in this fantastic audio interview with KUHF’s Bob Stevenson on September 16.