Bruce Lee Webb and the Seer of Corsicana 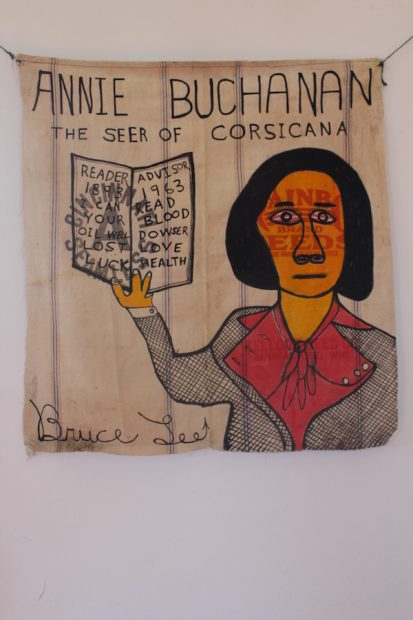 Bruce Lee Webb takes the back roads from Waxahachie to Corsicana. He ventures the road less traveled not only to savor the slow-lane rhythms of rural Texas, the forgotten bridges and buildings that glamorously defy the wacky rush of real estate… but also to behold that which remains unseen. Specifically, he has come to the 100 West Corsicana Artist and Writer Residency to conjure and divine the history and lingering presence of Navarro (and Limestone) County African-American psychic Annie Buchanan (1892-1962*). His exhibition on the Seer of Corsicana opens with a reception on December 1 from 3 to 6 p.m. 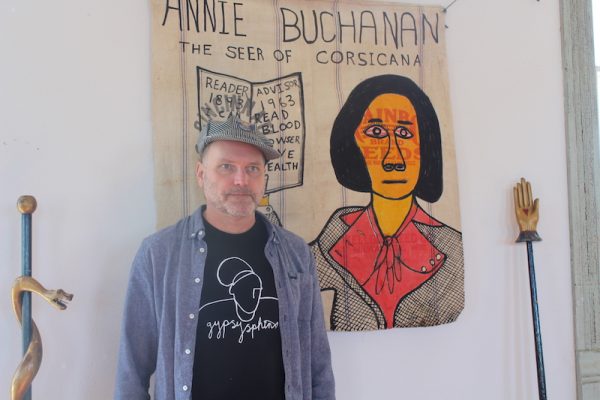 When I first met Webb several years ago, having gone to Waxahachie to write a magazine article about the always fun and interesting Webb Gallery that he operates with his wife Julie Webb, the second sentence he spoke to me was literally something like this: “Have you ever heard of a black fortune teller named Annie Buchanan?” I had.

The most informative sources I had found were the interview that writer and folklorist William Owens conducted with her in 1956 for the Oral History of the Texas Oil Industry project and the article, “The Seer of Corsicana,” that Owens published in the Spring 1958 issue of  Southwest Review. Owens found Annie Buchanan’s home, “a mansion among shacks and shotgun houses,” on the south side of Corsicana. In her waiting room, he encountered a mixed-race and mixed-class clientele, some from out of state, who’d come for advice on matters ranging from health to love and fortune. One told a story about the psychic’s locating of a lost hound dog. An ex-G.I.  had driven 50 miles to buy a bottle of Rawleigh’s cathartic pills from “Miss Annie” because the medicine seemed to work better when purchased directly from her. 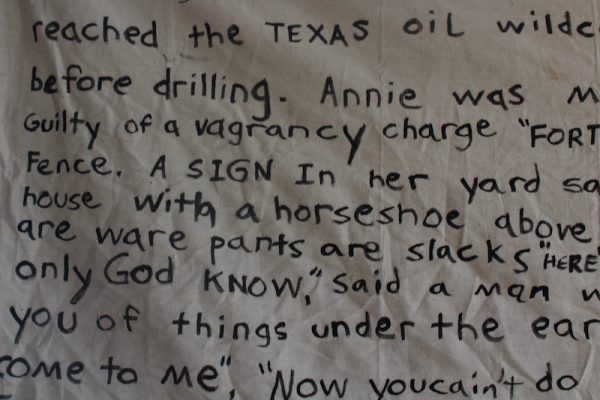 Webb’s installation includes text-based works that draw on Owens’ interview and article. One references a sign that the folklorist found in her waiting room: “I will not read to ‘women’ who ‘smoke’ are ware ‘pants’ are ‘slacks’ here. Positively no ‘drinking.’ By Mrs. Annie Jackson.” (Researching the clairvoyant, one encounters the challenge of navigating several surnames as she is believed to have been married some seven or eight times.) Webb’s text works also note the story Owens collected about Buchanan’s birth. The doctor, who arrived after she was already born, exclaimed that he’d never seen a baby like Annie. “When he examined me,” the psychic told the folklorist, “my feet was back that way and my hands down by my thighs. My haid was down on my shoulders. He says, ‘Look here, she’s got a mouth full of teeth… this is a clairvayan… Some folks calls them fortunetellers. She’s no fortuneteller… She can tell you things under the earth just like she can on top.’” 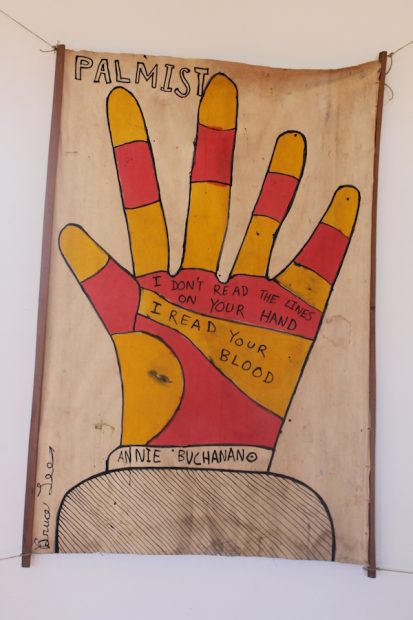 Despite the distinction made by the physician, Annie was often described as a fortune teller. She was raised in Groesbeck by a white family for whom her birth mother worked, and she first exhibited her gifts about the age of ten by predicting an ice storm that nixed a planned day of cotton picking. Another work in Webb’s installation, a drawing of a hand on a Bemis seamless sack, includes a brief explanation of Annie’s method of  “reading” people. “I tell the future and the past,” she explained to Owens in rapid, emotional speech. “That’s all people’s got in the world — future and past. Yo’ life is in yo’ palm, circling in yo’ blood. I read by blood circling — yo’ blood circling. It’s not by yo’ lines, it’s yo’ blood carried to the palms of yo’ hands. I reads hands.” 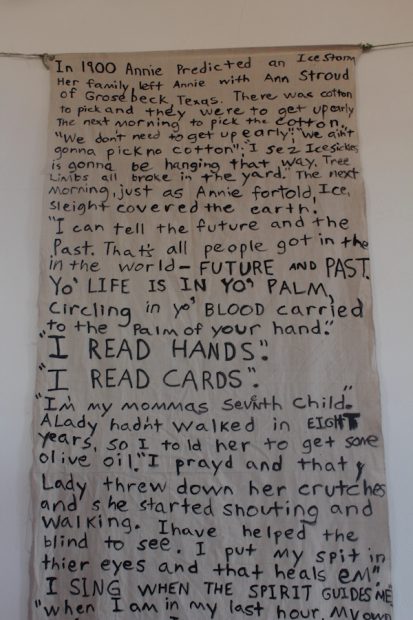 A Webb portrait of Annie Buchanan in the installation is drawn on a Rainbo Brand Seeds sack with India ink and Higgins ink (pictured at top). Based on one of two known photographs of the psychic obtained from the Corsicana Daily Sun, the portrait bears out the description given by Owens of a “woman marvelously well-preserved for the sixty-three years she claims. Her skin is soft dark brown, her eyes dark, emotional, with a look that seems to pierce ordinary barriers. She was wearing a gray faille suit, pale gold silk blouse, and brown velvet pumps with high heels.” 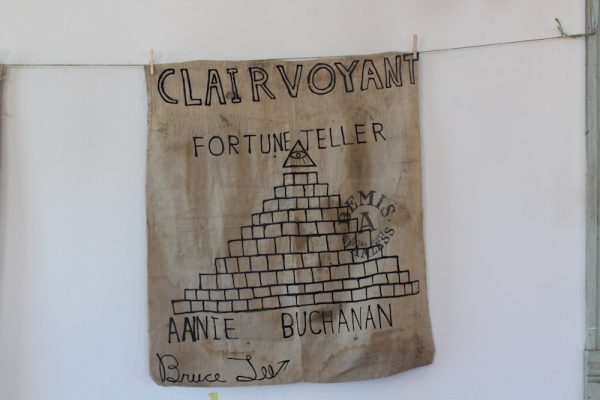 At some point, Buchanan lived in Mexia, where she reportedly assisted Colonel A. E. Humphreys in locating the first well in the Mexia oil fields, discovered in 1920. (My mother’s family was living in a tent in the Mexia field when she was born in 1922.) The seer told Owens that Humphreys rewarded her with $8,500 for the assistance, which she used to build the home in Corsicana. In 1924, a Mexia Weekly Herald article headlined, “NEGRESS TELLS OF MULE AND THEN OIL WELL,” was likely referencing Annie. A “negress fortune teller,” the article stated, “has assured drillers that they are about to enter the liquid pool of hidden riches. It seems that she is able to see into the ground… as well as into the dim and misty future and predict conditions as well as events.” There was no explanation of the mule. Despite that service to the community, that same year the “colored diviner of negro town” was hauled into a Mexia court and fined on “charges of telling fortunes.”

“I’ve had so much tribulation and trial since I been here I almost has to leave,” Annie told Owens about her time in Navarro County. Webb found evidence that she was found not guilty on a fortune-telling vagrancy charge by the city of Corsicana in 1954. On the other hand, the artist notes, the sheriff of Navarro County often called on the clairvoyant to help solve particularly hard-to-crack crimes. 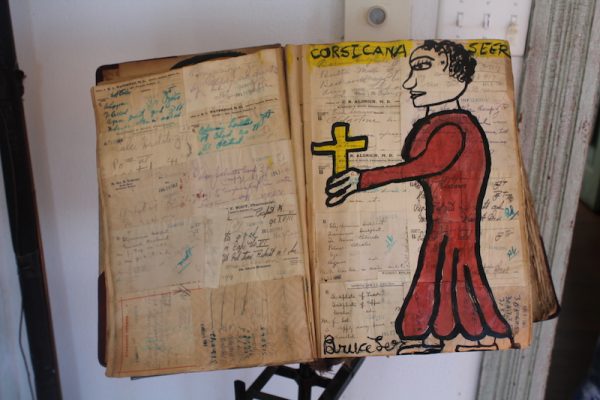 One of Webb’s text pieces relates that he was first introduced to the story of Annie Buchanan — aka Annie Jackson, aka Annie Buchanan West, etc. — by the Rev. L. T. Thomas, an artist the Webbs tracked down in an Abilene nursing home. Thomas told them about a radio program he did with the fortune teller on station KAND in Corsicana. A 2009 Navarro County Times article about the psychic noted that she had a singing group called The Friendly Harmonizers based in Waxahachie that visited a circuit of churches with her. According to the Times, she died right after praying one day in the Smith Chapel Primitive Baptist Church. “She was buried in Freestone County,” the report noted, “next to the husband she liked the best, Clark West.” (Another source has his name as Carl West.)

Some of the healing methods the seer employed remind me of the legendary South Texas curandero Don Pedro Jaramillo. She instructed a man whose wife had been paralyzed for eight years to go buy some olive oil, and while he was at the store, Annie prayed for the woman. “She got up and went to walkin’ — an’ jus’ shoutin’ and I shoutin’ too, to see her,” Annie told Owens. A treatment for a blind person involved placing “that right thick spit in their eyes… That open their eyes. That heals yo’ eyes. That’s right.” 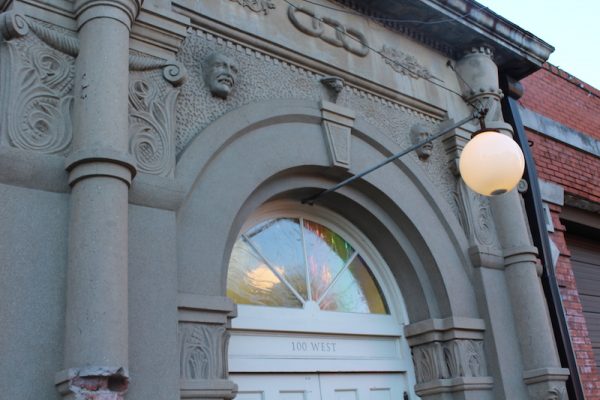 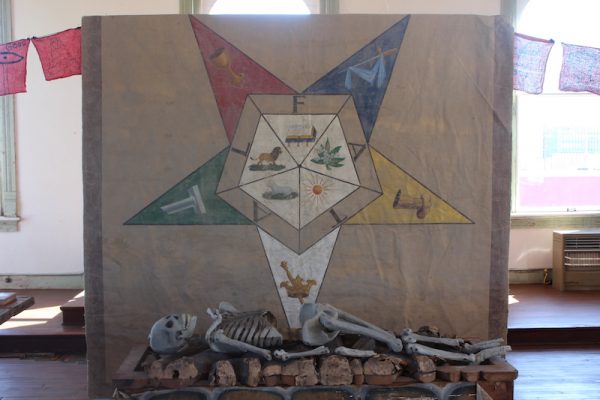 Order of the Eastern Star, artifact

The three-story 1898 building that houses 100 West Corsicana Artist and Writer Residency was once home to the local Independent Order of Odd Fellows. It’s fitting that Webb, a collector of fraternal art and artifacts, would serve a residency at the art space, and in addition to his works about Annie Buchanan, he has filled the installation with fraternal pieces and other assorted esoterica. Because Annie was a member of the Order of the Eastern Star, a centerpiece of the exhibition is an Eastern Star cloth. And because Owens spied an artificial rattlesnake coiled in her garden of paper flowers, a table of potent symbols includes a carved rattler. I was especially drawn to a large medicine bottle, “a home laxative made of herbs,” produced by one Mother Mary Smith. “COME ONE COME ALL – THE SICK AND HEAVY LADEN,” beckoned the fragments of remaining paper label. “I AM A STATE MEDICINE VENDOR.” 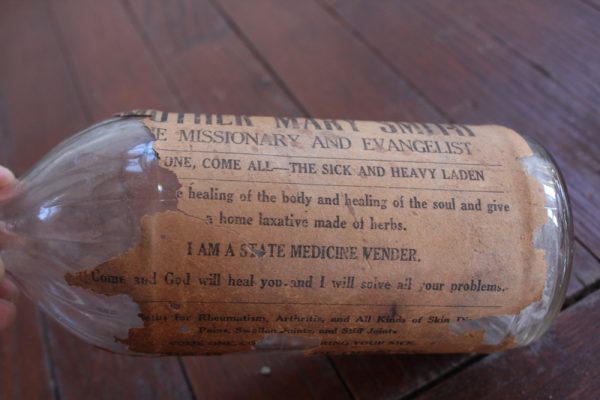 The truly uncanny aspect of Webb’s work is that it works with such authenticity and charm. It’s extremely difficult and unusual for an artist who is so clearly embedded in the art-world fabric to produce Outsiderish work so clearly devoid of artifice and pose. There’s a winning purity to his intent, motivation, and execution that seems almost impossible to spark and sustain. For that I’m really kind of in awe of the guy.

Bruce Lee Webb’s installation on the Seer of Corsicana continues at 100 West Corsicana Artist and Writer Residency through the end of December.

In Conversation at 100W: An interview with Kyle...