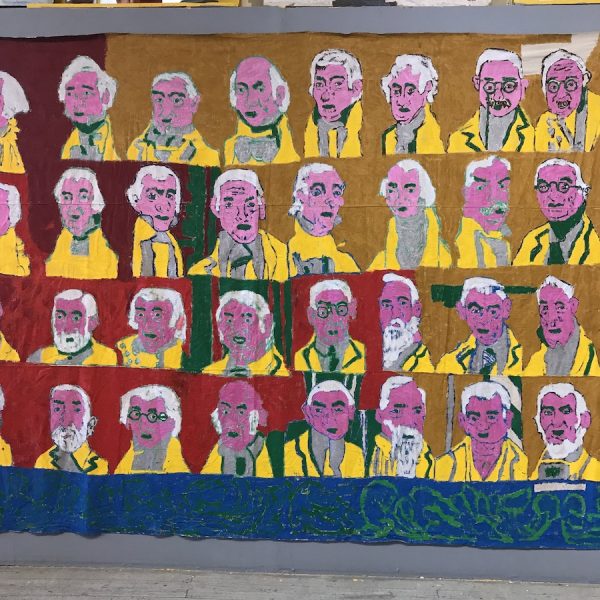 It’s feeling more and more like summers are jam-packed when it comes to art, compared to the dusty doldrums of the recent past when July and especially August went quiet. Two shows on the southern edge of the greater-Dallas area are on view, in varying states of air conditioning, through much of the summer: Paint it Black at Webb Gallery in Waxahachie, featuring the work of Ike E. Morgan, Ricky Bearghost, and Taylor Rushing; and at 100 West Corsicana, a show titled Reenactments of a Perpetual Cycle by that space’s artists-in-residence, Edison Peñafiel and Rachel Wolfson Smith. 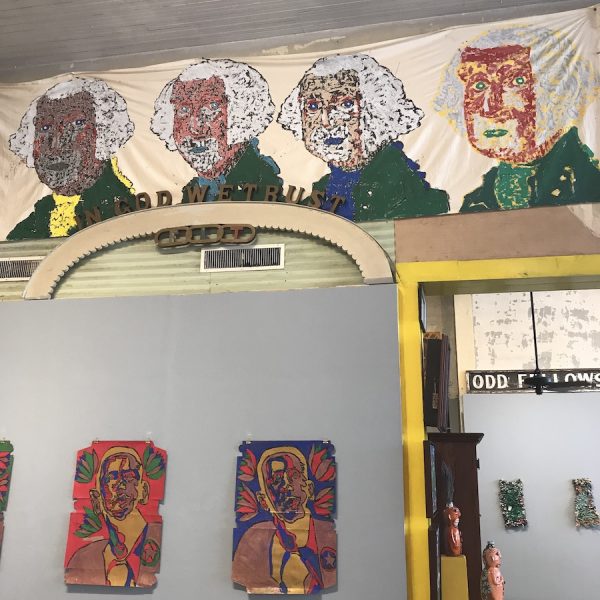 The neon light of the iconic three-links Odd Fellows sign at Webb Gallery is possibly the only thing not for sale at the space, says owner Julie Webb. The art-dealer duo Julie and Bruce Webb have specialized in outsider and folk art for years. At the center of Paint it Black is artist Ike E. Morgan, who has been showing with the Webbs since 1992. The Webbs told me the artist repeatedly spent time living in the Austin State Hospital (he now lives in Austin in a kind of care-taker facility with a roommate). Despite the general perception of healthcare in the United States, this living situation gave the artist resources that he didn’t have in his earlier life, by way of sustained care and the ability to pursue what interested him. It’s good for all of us that a couple of former Dallas punks-turned-Waxahachie gallerists wanted to bring his work to a wider audience. 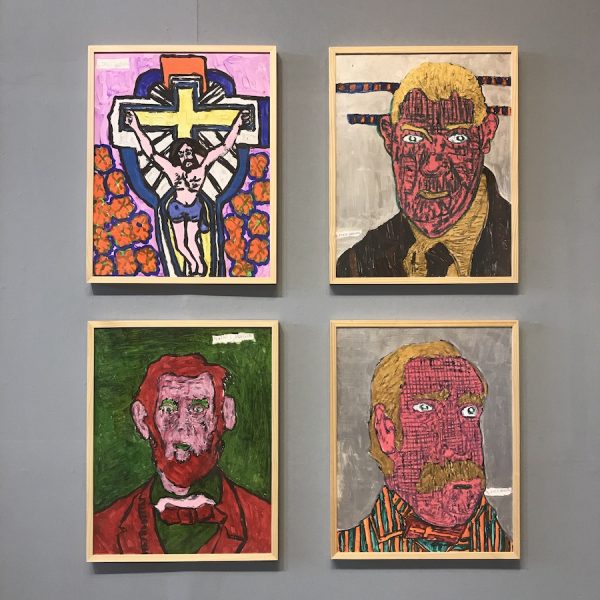 The work is a slapdash of unmitigated color — mostly recognizable faces like the Mona Lisa and George Washington — along with a series of bird paintings. These pieces line the wall in a dense matrix; some are a subtle pairings, and the presidential portraits appear in the dozens. The obsessive nature of Morgan’s motifs is accompanied by the strikingly simple color palette: pink and white, red and yellow. His work can usually be dated by the paint colors that the gallerists procured for him. Morgan will paint and paint until the last dollop has been used up. 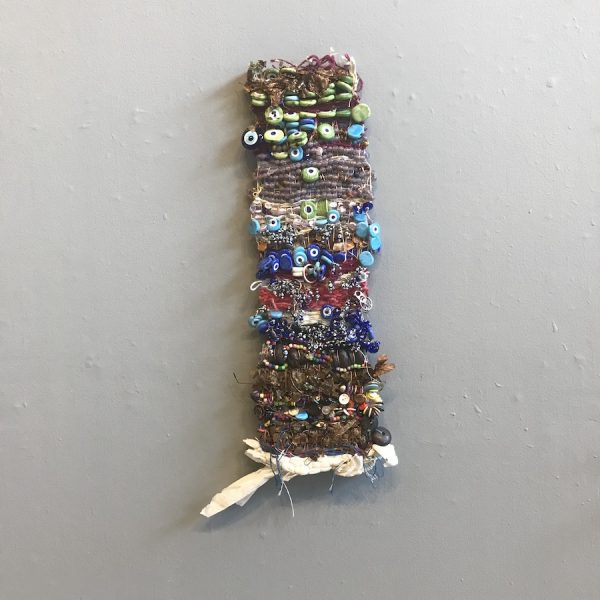 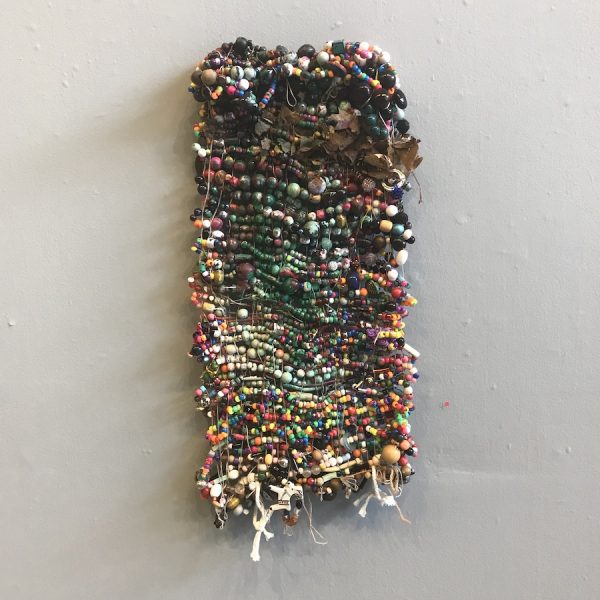 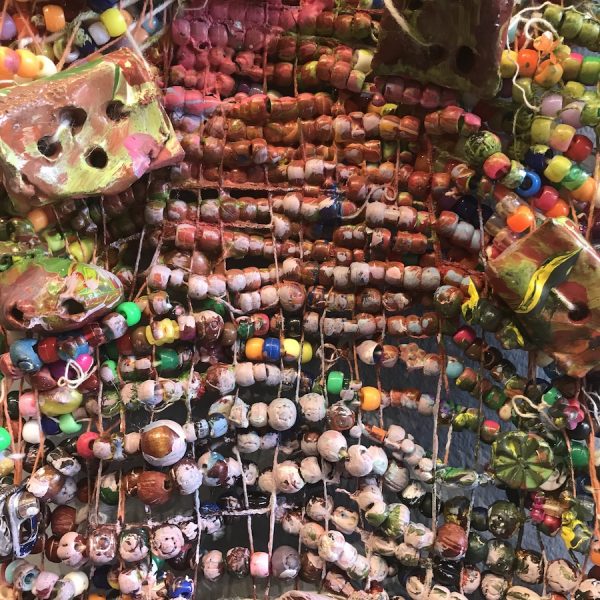 Work by two other artist are featured as well: Ricky Bearghost, a Native American weaver, and Taylor Rushing, a recent graduate of the University of Wisconsin. Bearghost’s weavings hang along the rightmost wall of the space — a collection of foraged and painted beads, as well as other materials woven on looms that he often designs himself. 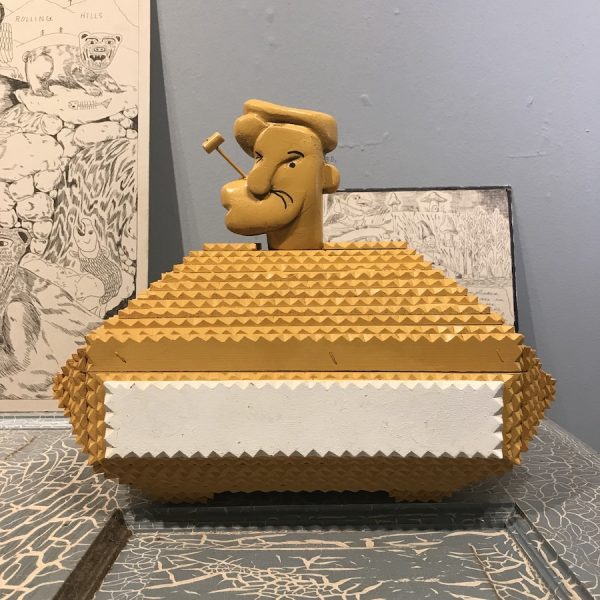 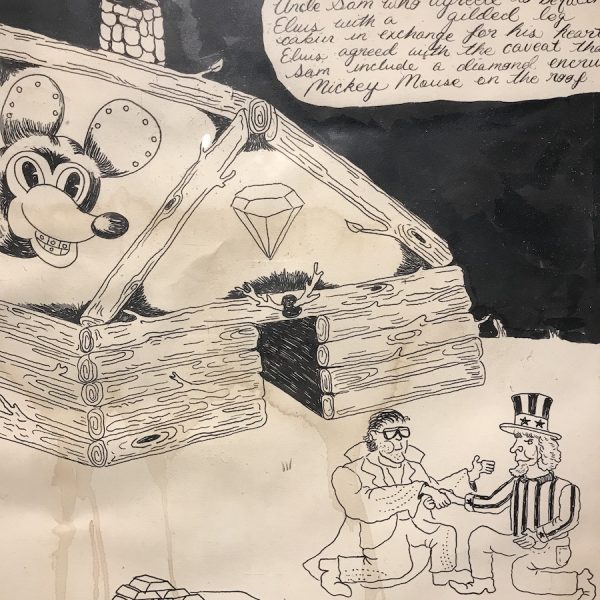 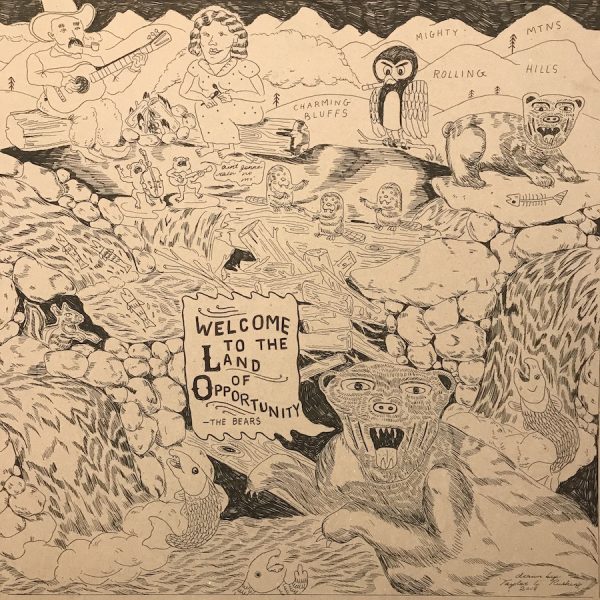 Rushing shows illustration, sculpture, and some decorated apparel that is inspired by the styles of the 1920s. Anachronistic print versions of Mickey Mouse and Popeye appear alongside hand-drawn text bubbles in script that would pique the interest of any design-focused creative person. Rushing has an imagination that reflects a sensibility lost to time, which fits neatly into the gallery’s sensibility.

Webb Gallery, a place that recalls every memory of Texas antique stores and occult shops laden with secrets from the past, is really about making art accessible to those who want to step into the minds of artists who really do what they love, which, often, is to pull on the fabric of time.

From there, it’s a 40-minute drive to Corsicana. Kyle Hobratschk has dedicated his post-graduate career to setting up shop in this town just an hour south of Dallas. When asked how long his 100 West residency program has been running here, in this former historic Odd Fellows lodge, he suggests that it is around seven years. The sign of success is a lost sense of time. 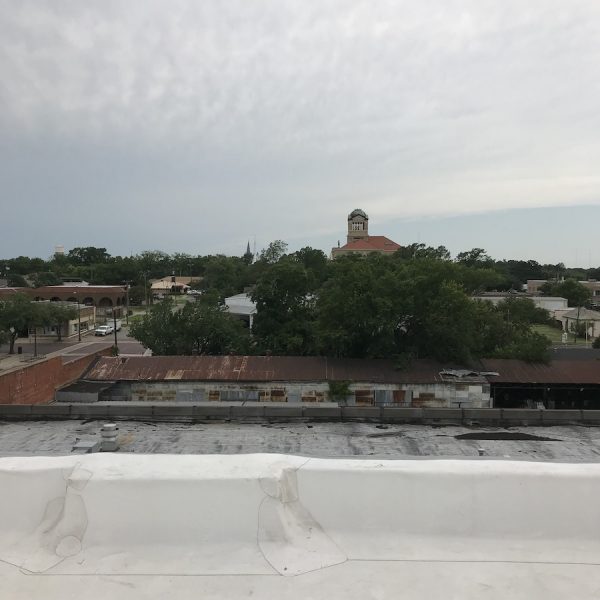 At 100 West, Rachel Wolfson Smith and Edison Peñafiel exhibit their work in Reenactments of a Perpetual Cycle, which is both two solo shows and a two-person show, as the work is separated and brought together by the verticality of the building. The Austin-based Wolfson Smith was available to tour me though both exhibitions in the striking space that’s still replete with a theater used by the Odd Fellows for reenactments of biblical stories and other moral activations. 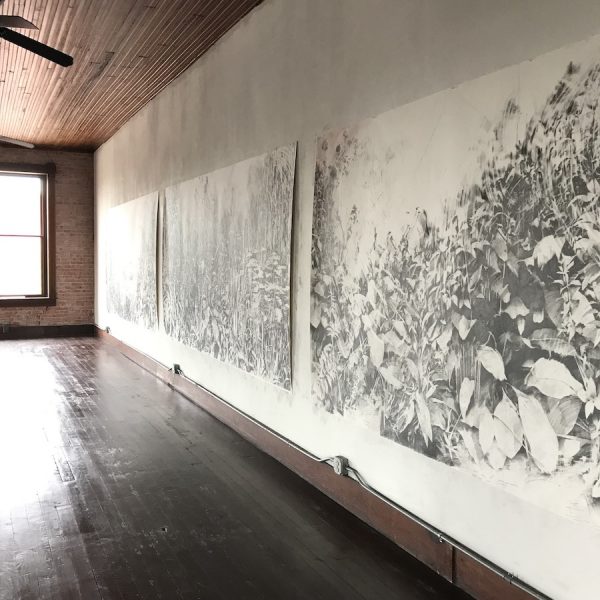 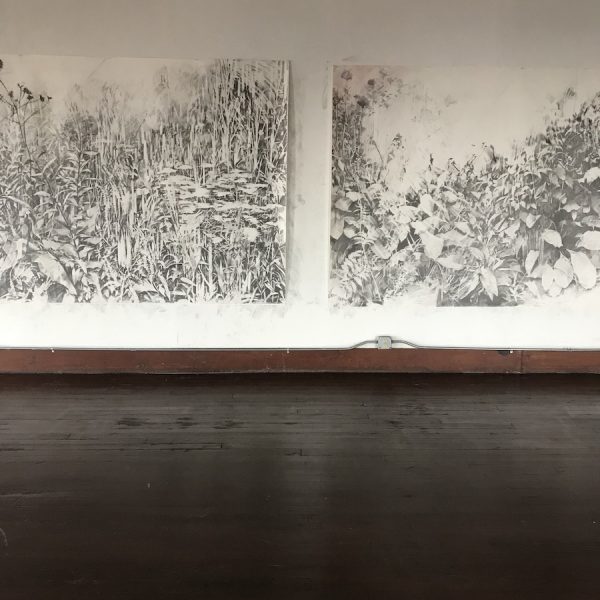 The two exhibitions on view at 100 West were produced individually but conceptualized by the artists in association with each other’s work in mind; the works are in conversation with each other. The large graphite drawings by Wolfson Smith are her largest ever, thanks mostly to the size of 100 West’s gorgeous and generous studio space. As Allison Klion (of Dallas’ Ex Ovo) writes in her thoroughly researched essay for the show (you can link to it through here), the work directly references the drawings of the Dutch landscape architect Piet Oudolf’s personal garden. Thickets of grass and leaves are softly laid down onto paper in graphite, then chiseled away by flurries of eraser marks. There are other structural elements in the imagery, like subtle-but-decisive through-lines running beneath the entire triptych. Pithy textual musings hide amongst the foliage. 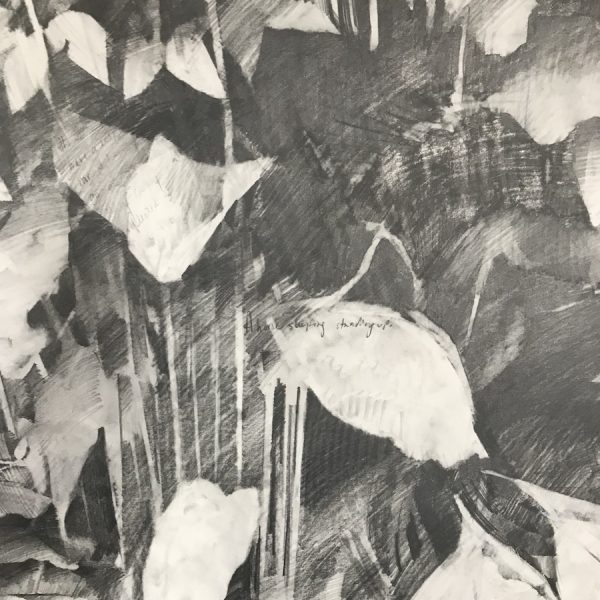 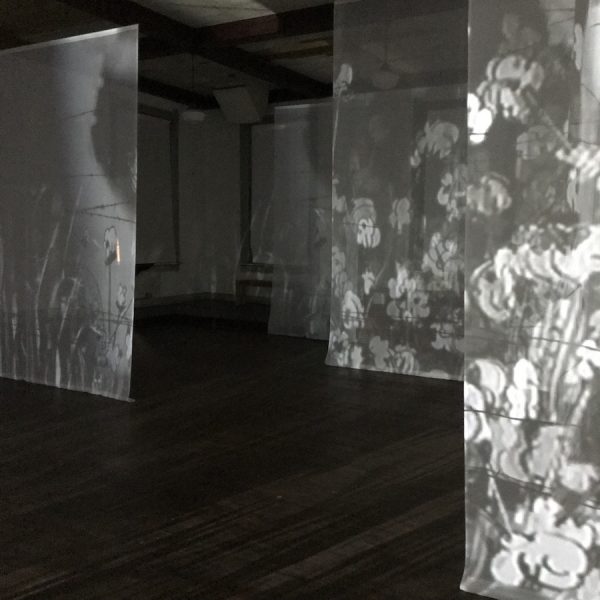 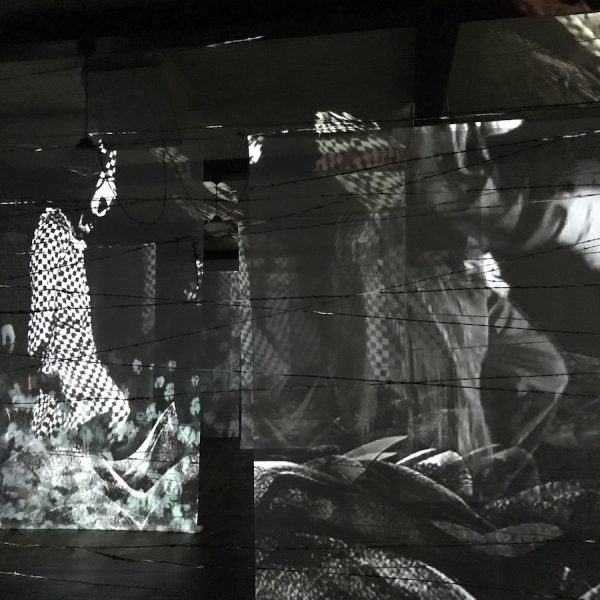 Edison Peñafiel’s work is a video installation on the third floor of the building; it remarks upon the theme of human migratory patterns, though not as a specific political commentary about current events. All of the slowly marching bodies in Peñafiel’s video are actually the artist himself, dressed up in costumes from a local theater, which complicates the historicity of the subject matter. Rows of sheets hang from the ceiling, and the projections upon them are softly dimmed the further you walk into the installation. There is a “gate” of barbed wire separating the projection area from the larger, walkable space, which Wolfson Smith opens for me at a particular stretch of the wire that lacks any barbs. You can only enter the installation at this corner, she says. This large-scale, multi-media installation is not unlike the work for which Peñafiel was awarded the 2019 Florida Prize in Contemporary Art. 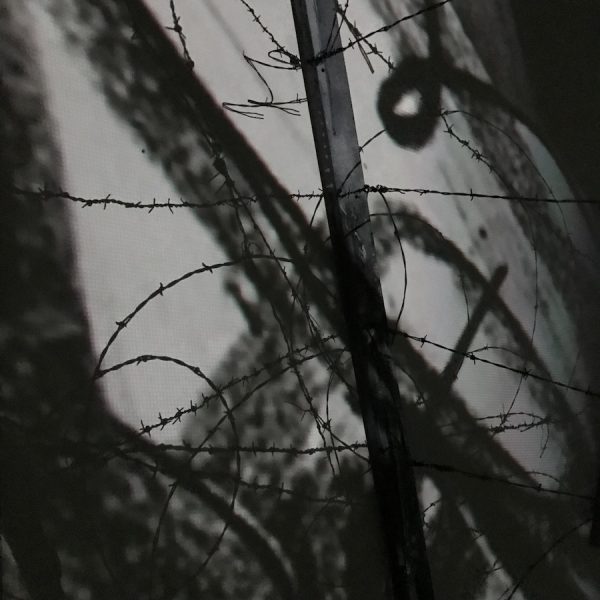 The program at 100 West is in an exciting stage of development. Hobratschk has recently opened a non-profit for the purpose of establishing a funding flow, so that the program can pay for itself.

Paint it Black is on view at the Webb Gallery, Waxahachie, through July 21; Reenactments of a Perpetual Cycle is on view at 100 West Corsicana through August 3, 2019. There will be a closing reception on Aug. 3 with doors open from 11:00-6:00.

Enjoy hearing your voice, William. We are lucky to have you writing with Glasstire.

A wonderful show! I feel fortunate to have seen it.