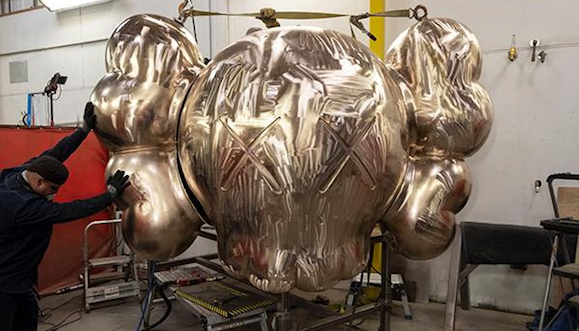 Beginning December 9, the Modern Art Museum of Fort Worth will unveil its new acquisition— a monumental bronze sculpture by KAWS, CLEAN SLATE, 2018.

KAWS is an American graffiti artist and designer known for his toys and paintings. Pop Art and culture permeate his cartoonish Companion series of figurines, which bear a resemblance to the works of Takashi Murakami. His work includes repeated use of a cast of figurative characters and motifs, some dating back to the beginning of his career in the 1990s, initially painted in 2D and later realized in 3D. KAWS’s career began with graffiti, but he quickly moved to making paintings, sculpture, and drawings informed by art history and inspired by cartoons. He has created a cast of recurring figures that candidly reflect both irreverence and affection for our times. KAWS has a global audience of all ages that continues to grow as his recognizable imagery has made its way into the commercial world, in the form of toys and apparel, among other examples. With his massive international presence, KAWS is now one of the most influential artists of his generation.

This acquisition continues a relationship with KAWS that began in 2011 with a small-scale solo exhibition, part of the Modern’s FOCUS series. As a result of that show, in 2012 the Director’s Council voted to acquire the painting WHERE THE END STARTS, 2011. Four years later, the Modern organized a mid-career retrospective of KAWS’s work. Named after the painting acquired in 2012, KAWS: WHERE THE END STARTSopened in Fort Worth in 2016 and traveled to Shanghai’s Yuz Museum in 2017. New variations on COMPANIONtook up residence throughout the museum, including a fiberglass version from 2016 of CLEAN SLATE that occupied the building’s entrance plaza.

Gimmick. Ft W is better than this